Today’s Joanna Page is Very Annie Mary, a little movie set in Wales that features just about every Welsh actor in existence. It stars Rachel Griffiths, an Australian actress who impressed everyone right up until she joined the cast of Brothers and Sisters, as Annie Mary, the frustrated (in every sense) daughter of Pavarotti-impersonating baker Jonathan Pryce.

She wants to help her best friend, the seriously ill 16-year-old Bethan Bevan, get to Disneyland and singing in a talent contest might be the only way to get the money. And despite being 22 at the time, Joanna Page played that sick teenager. 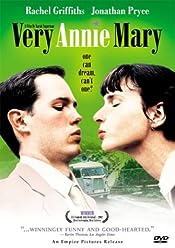 Plot
When Annie Mary was 16, she was offered a scholarship to sing in Milan, but was never allowed to go because her mother was dying. Now Annie Mary is 33 and no longer sings. She lives under the shadow of her chapel-strict father, known to all as The Voice of the Valleys, who sees himself as a budding Pavarotti. She wants to break free, but her father has a stroke and demands even more of her. When she finally rebels, the whole village becomes involved in a competition to raise money and get Annie’s terminally ill best friend, 16-year-old, Bethan Bevan to Disneyland.

Is it any good?
This is best described as whimsical, rather than laugh out loud funny. To me, it strikes me as being the Welsh version of Four Weddings and a Funeral, in which mostly English actors and production staff willing got together and agreed to corroborate every stereotype about the English the rest of the world has ever concocted.

Not living in the valleys, I can’t say how authentic this is, but it has all the hallmarks of wanting to get an international (or even English) audience by playing up to concepts of both ‘good’ and ‘bad’ Welshness, such as quaintness, omnipresent singing, community, religion, line dancing and coarseness.

But you couldn’t really accuse it of being an English pastiche of life in Wales. For starters, it has a Welsh writer/director, Sara Sugerman, supervising and the Arts Council of Wales backing it financially.

Almost every actor in Wales is taking part – creating a melange of North and South Wales accents you wouldn’t believe. We have Jonathan Pryce – who’s a very good singer, it turns out – as the oppressive, undermining father of Rachel Griffiths, driving around town wearing a Pavarotti mask; Kenneth Griffiths as a fire and brimstone vicar; and Ruth Madoc as Pryce’s Gladys Pugh-esque love interest, willing to seduce him when he can barely move after a stroke.

Bestest real-life pals Ioan Gruffudd and Matthew Rhys, who also appears with Page in The Lost World as her apparent love interest and in Brothers and Sisters as Griffiths’ brother, camp and send themselves up something chronic – and only slightly offensively – as gay, singing shopkeepers.

Page’s future Gavin & Stacey co-star, Ruth Jones, would like to make a complaint. Rhys Ifans’s brother Llyr (who also appeared in Twin Town) makes an appearance as a ginger gravedigger. Even Cerys Matthews is in there and provides some of the soundtrack.

If it’s a conspiracy against the Welsh, it’s one they’ve hatched themselves.

I imagine, in fact, that this is best watched by someone who is Welsh and from the valleys and can say "Oh, that’s so true!" (if it is) or who has no real experience of Welsh culture or people, and for whom all these stereotypes and weird behaviours are going to be brand spanking new. Anyone else in the middle of these two extremes is likely to be baffled about why this is supposed to be funny.

A comedy?
Taken as a comedy, it falls a little flat – literally, since Rachel Griffiths spends considerable time falling over and exposing her pants, physical comedy being the main source of the film’s laughs, if that’s your thing.

Some of the situations are amusing, such as the group of kids who are rehearsing scenes from The Full Monty, for example, or Griffiths’ taking flight at the talent contest.

Unfortunately, if you’ve ever seen Morwenna Banks as Gwyneth in Absolutely, it’s very hard to spot even a slight difference between the two performances, so I spent the entire movie wondering where Denzil was – which undermines things somewhat. The performance is fine as it is and Griffiths has an excellent accent: it’s just too reminiscent of Banks for me.

But the film is mostly about Griffiths’ attempts to spread her wings and deal with her father, both before his stroke and after. It’s a well worn script concept: daughter who sacrifices her own needs for those of her family and eventually must find herself again through song, and I didn’t find that central concern at all plausible or engrossing. It’s the kind of plot that gets National Lottery funding because people would quite like a new The Full Monty-style success for the British (and particularly the Welsh) film industry and think whimsy is the way to do it.

It’s not a bad movie and is endearing and life-affirming in a quaint way, but it’s not really outstanding in the slightest, unfortunately.

Joanna Page
Our Joanna plays Bethan Bevan, the sickly teenager whom everyone in the village wants to raise money for.

Bethan, being a poorly girl, spends almost the whole movie in bed.

Right up until the moment when Annie Mary sings for her.

Then she karks it and Annie Mary sings again, this time at her funeral.

Very Annie Mary isn’t available on DVD any more, but you can pick it up for about £15 from Amazon.co.uk, or a good deal cheaper (c. £5) if you don’t mind a Region 1 version.

Today, Joanna Page is getting David Cameron to worship her