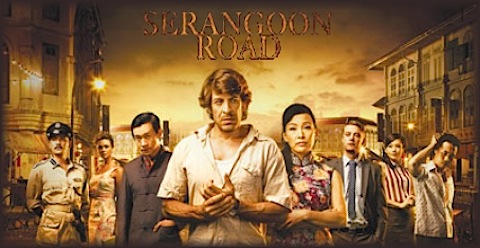 Australia’s been having something of a renaissance when it comes to quality TV of late, particularly in the realm of the period crime drama. We’ve already seen one rather fine effort this year: ABC1’s The Doctor Blake Mysteries, in which Craig McClachlan investigates crime in a small Victoria town in the 1950s. That’s been bought by the BBC and has already been renewed for a second season.

Now, in a co-production with HBO Asia (that network’s first ever original drama series), ABC1 are giving us Serangoon Road, a surprisingly enjoyable and intelligent private detective show. Set in Singapore in 1964, it stars Don Hany (East West 101) as Sam Callaghan, a former Australian soldier who helped the British during the Malay uprising of the 1950s and now helps Joan Chen (Twin Peaks), who has inherited her late husband’s detective business. Callaghan has to deal not only with the local criminals, including the Red Tiger gang, he has to cope with the sometimes helpful Americans (largely Michael Dorman of The Secret Life of Us), the usually unhelpful British and the occasional Australian ex-pat – in particular, Claire Simpson (Maeve Dermody), whose businessman husband is always absent…

Filmed in Malaysia and with an obviously large budget and a cast of huge Australian and Singaporean stars, it would be tempting to think Serangoon Road would be nothing but a beautiful-looking, historical bore. Instead, it’s a vibrant, exciting, multi-lingual show that brings to mind the likes of Bring Em Back Alive and Tales of the Gold Monkey, except thankfully with more intelligence.

About
1964-65. Singapore is a city at a crossroads. Political and racial tensions are at fever pitch as the British pull out, and a new nation is about to be born. The lights of Bugis Street have never burned so bright: bootleg copies of Motown songs boom out from street stalls; the Rolling Stones are in town along with tourists and American sailors fresh from Vietnam. They join British and Australian soldiers checking out the prostitutes and gambling dens en route to their own war in Borneo.

This is the city of Sam Callaghan, Patricia Cheng, the CIA’s Conrad Harrison and the clients of the Cheng Detective Agency. The agency’s cases range from the usual (straying spouses and petty fraudsters) to events with international implications and complications. Sam’s contacts from his military days are useful – but they start to drag him back into a dark world that he would prefer to leave behind.

A co-production partnership between ABC Television and HBO Asia, with the participation of ScreenWest and Media Development Authority of Singapore. Produced by Great Western Entertainment and Infinite Studios.

Is it any good?
Although the third-episode is a bit of snoozefest, the first two episodes are really refreshing pieces of television. Smart, with a strong sense of the period and showing something that virtually none of us will have seen on television before, it manages to marry a conventional detective series that would be perfectly at home in the 1960s with the exotic locale of Singapore and its turbulent history, while giving it all a 2013 spin.

I said it reminded me of Bring Em Back Alive and the like and while that might seem a little odd and purely because of the locale (albeit 30 years or so earlier), there are points of similarity, with Hany’s character being a man of action, having to deal with romance, spies, murder, criminals and more. Hany – one of Australia’s finest actors and a compelling screen presence, albeit one who mumbles a lot – handles both drama and action well.

Equally interesting are the rest of the Australian cast, but also the local Asian cast. We have Joan Chen, here getting to be something more than ‘exotic’ or the passive romantic interest for a change. And although we might recognise Chin Han from The Dark Knight, 2012, Last Resort, Arrow, Contagion and even last night’s episode of The Blacklist, he’s not exactly a household name in the west. Yet, in common with other cast members including Alaric Tay, Pamelyn Chee and Ario Bayu, he’s a big Singaporean star – we’re essentially getting the cream of Singaporean talent here, without even realising it.

The plots are more grown-up than you might expect, involving murder and Navy SEALs in one case, the quest for a husband lost during the war in another, Sunday night’s episode taking us to riots and MI6. Hany’s character can’t get by purely in English, either, with a refreshing amount of Mandarin spoken by both him and other characters, too. There are some very impressive fights, explosions, chase scenes and more, as you might expect given the stunt crews available in the locale, although there’s an element or two of the escapist, with a blank bullet shot at point-blank range proving not to be fatal in the first episode, for example, and Hany able to take on entire gangs of criminals with his martial arts skills. But there’s nothing incredibly egregious here.

Where it might have a tendency to go wrong is to focus to heavily on the history and some of the misery of the situation. Hany’s character has an intriguing local past – having been a prisoner of the Chinese during the Second World War and lived in Singapore most of his life- giving him insights that the CIA and the audience won’t have into the world around Serangoon Road. That works well at first. But Hany’s traumatisation, Chen’s pining for her husband, Dermody’s juggling of her husband and her affair with Hany, not to mention the Singaporean struggle to become a nation in its own right and develop an identity following its independence from Britain, means that the show has a tendency to be darker and less enjoyable than it should be. Certainly, the third episode was sorely missing the fun that had balanced out that misery during the first two episodes.

But if Serangoon Road can restore the balance and avoid becoming too pensive about the problems of the time or the situation it’s created, this will be a great show to watch and a sign that Australia and Asia can truly compete on the international stage when it comes to creating compelling television.