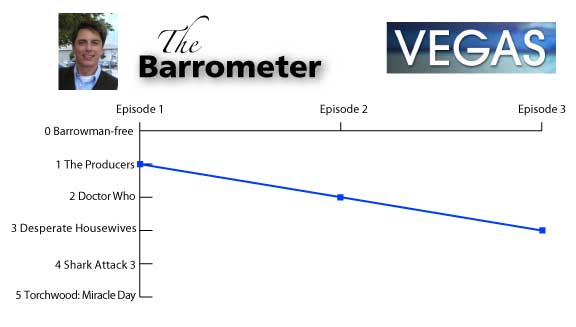 Funny, isn’t it, how the drive to force a story into a procedural format can ruin a perfectly excellent show? Perception, for example, is a really good and touching look at a man afflicted with paranoid schizophrenia… who every week has to solve trivial and ridiculous crimes.

And then there’s CBS’s Vegas, which could be a really excellent almost The Wire-level bit of work looking at systems, how they try to inhibit change – in one case, the police force, in another, the Mob – and which instead has to survive having to deal with a largely uninteresting murder of the week every episode.

Vegas is frustrating. It’s most interesting aspect, laid out in the first episode, is the battle of wills between the force of good in Vegas, sheriff Ralph Lamb (Dennis Quaid), and the force of evil, Vincent Savino (Michael Chiklis) – both based on real Vegas characters of the 60s. But everything is shades of grey in the set-up. Quaid is a rancher and former MP who believes in his own form of informal justice and who’s against the modernisation of Vegas. Chiklis, on the other hand, has a code. He also wants to civilise Las Vegas and turn it into the city it is now.

Much of the interest in the otherwise slightly dull third episode, which is mainly concerned with the investigation of a somewhat uninteresting crime, is watching Chiklis essentially spelling out what Vegas has to become – and does indeed become. He’s trying to get the Mob to fund the building of a luxury restaurant and arena in his Savoy casino to bring in tourists and gamblers. He’s the voice of reason, advising against Mob shootings, because Vegas needs law and order if it’s to keep its clientele. And the Mob doesn’t like change.

Quaid, now largely having to survive on facial ticks to inject his character with more personality, has been reduced to running around town solving crimes, rather than having the ambiguity he displayed in the first episode, which is a shame. But he still has more to do than Carrie-Anne Moss, who just drives from place to place providing plot exposition.

Episode two did at least introduce another woman to the cast, this time on the side of the Mob – the daughter of a mobster whom he sent to college and now has ideas on how to improve the casinos. Unfortunately, she seems to be there to demonstrate that there’s more to running a casino than maths and book learning, and to boost Chiklis’s character. I’m hoping she’ll get more to do off her own bat – ditto Moss – in later episodes.

The show’s main draw is still the cold war between Quaid and Chiklis, each making move and counter move against each other without ever drawing blood, Quaid unable to get enough evidence to prove what Chiklis is really up to, Chiklis unwilling to shoot his own business in the foot by shooting Quaid. The procedural element is largely unremarkable, although given the period setting, it does have the benefit of not having to deal with forensic science and other modern techniques of investigation: essentially, it’s cowboy justice and cops asking questions and having to make deductions like they did in the old days.

But as the third episode shows, Vegas desperately needs to avoid becoming a murder of the week show, since it has the clear potential to be a lot more. The period setting, the mob intrigue and the fact we know how Las Vegas will eventually end up gives the show a lot of range that it uses to its advantage when it can. But CBS’s saddling it with the need to be as episodic and as procedural as possible is ruining it. Fingers crossed it can slip its tether and be free.

Review: The No 1 Ladies’ Detective Agency 1×1

The news for Wednesday 5th March 2008