What better way to celebrate International Women’s Day on a UK TV blog than to look at a piece of work by the UK’s most celebrated, famous and popular female TV writer, Lynda La Plante CBE? Even better, it gives us a chance to take a look at the show that gave the world its first proper chance to say “Hello to Jason Isaacs!”

Civvies was a 1992 BBC1 drama by former actress La Plante, who was fresh from BAFTA wins thanks to the previous year’s Prime Suspect on ITV. She’d written Civvies four years previously, but in common with a series she’d researched about the drugs squad, it had sat on the shelf until the Prime Suspect win had shown she was capable of more than just another rehash of her popular 1984 show Widows and its sequel Widows 2.

The show was inspired by a builder working on her house who asked her to help him find jobs for some friends who had just left the paratroop regiment. “I rang up eight different security firms, but they refused to offer work to ex-soldiers on the grounds that they were too institutionalised,” she said at the time in an interview with The Independent.

Deciding to tell the stories of these supposedly unemployable paras and men like them – in fictionalised form at least – La Plante created a show that saw a group of former paratroopers, traumatised and in one case seriously wounded by their tours in Northern Ireland, trying to find legitimate work for themselves on ‘civvy-street’ and instead inexorably being drawn into a life of crime.

For the show, which an executive at the time described as “the most violent home-produced series the BBC has ever made”, the producers assembled a cast including Peter O’Toole (Lawrence of Arabia himself), Peter Howitt (Bread and later the writer/director of Sliding Doors) and the relatively new-to-TV Lenny James (now best known from US shows Jericho, The Prisoner and Hung). James also went on to star in the BBC’s The State Within, where he was reunited with another Civvies co-star – a certain Jason Isaacs.

Civvies sees Frank Dillon (Isaacs) leaving the parachute regiment where he reunites with former comrades on civvy street. At first, he tries to get legitimate work, but soon he’s lured by another ex-para into ‘insurance work’, which turns out to be less than legit, involving, for example, taping £10 notes to his thighs and beating up people who turn out to be undercover cops. Jobs from pals usually result in the same borderline illegality.

Figuring high in these schemes is Barry Newman (Peter O’Toole), whose son was in the paras and who feels like he owes a debt to Dillon. However, this obligation doesn’t weigh too heavily on his conscious, since in the final episode (spoiler alert), Frank and his fellow soldiers are framed by Newman and sent to prison.

In the background to all the episodes is one particular incident in Northern Ireland, a pub bombing by the IRA, that’s left emotional scars on all those who were there, including Dillon.

Each episode dealt with each of the individual soldiers who were at that incident, exploring their back stories, the changes in their lives since leaving the army, and how that incident affected them. The title sequence changed to reflect the subject of each episode:

How well is everyone bearing up? Not well. One reveals to Frank that he’s gay and loves him – and is immediately thrown out of the group after he tries to kiss him; Howitt’s character, Steve Harris, who’s turned to drink and self-pity, tries to rape a woman and ends up killing himself with a hunting rifle when he’s thrown out of the group, too.

Civvies was a notably violent show as well, with gunfire and bare-knuckle fights aplenty. A graphic scene shows how Harris, who was a lady’s man and charmer, loses his voicebox when he’s shot on patrol.

Most notable violent is episode five, which sees Frank and the gang go to an estate in Scotland to guard against poachers. There they’re reunited (unembeddable YouTube clip here) with a former military policeman, Tony Malone, who was also at the bombing.

Malone, in this case, was played by Terry O’Neill, who like many of the actors in Lynda La Plante series, went on to appear in other shows of hers (James, for example, was in La Plante’s Comics in 1993). O’Neill’s not necessarily a household name, but he had a Hollywood career, teaching Arnold Schwarzenegger, for example, how to do high kicks for Commando. 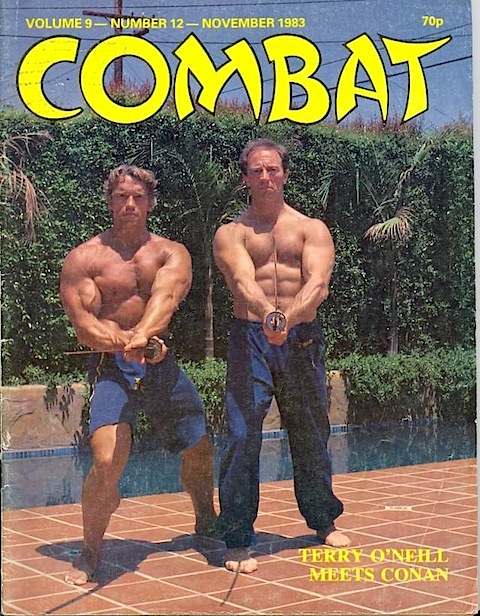 The eventual fight between Isaacs and O’Neill was without doubt one of the most brutal and realistic UK TV had ever shown up until that point.

Unfortunately for International Women’s Day (sorry), unlike much of La Plante’s work, Civvies is a very macho show with only two regular female cast members who get few look-ins and are consigned to being largely long-suffering wives and/or girlfriends. The men themselves are unsurprisingly manly, prone to hard-drinking and constant fights. Dialogue is similarly manly (“It was my life… my lads”). Emotional self-examination isn’t their thing at all. Indeed, Dillon at one point says about the army, “‘They want to change it all. To clean the image up. Yes-men, that’s what they want now, not soldiers.”

The show itself received a lot of complaints, not least from the army, which said it would likely have a ‘demoralising’ effect on troops, the paras’ then Colonel Commandant, Lieutenant General Sir Michael Gray, writing to the BBC listing 50 supposed inaccuracies in its accompanying book by La Plante. It also got parodied by Harry Enfield:

For whatever reason, whether it’s the BBC, the controversy or some other reason, Civvies has never been released on DVD or repeated. But you can watch at least three of the episodes on YouTube.

Oh, and those paras La Plante tried to find jobs for? By the time the series aired, they’d all ended up in prison.

La Plante’s stellar career
La Plante’s Prime Suspect BAFTA win also opened up other writing opportunities for her. The same year as Civvies, she had a film, Seconds Out, in BBC1 Screen One slot, and a four-part ITV series Framed with Timothy Dalton and (Hello To) David Morrissey.

She has continued to find TV success ever since, forming her own production company in 1993 and making more crime-oriented shows such as She’s Out and The Governor, as well as ITV’s Trial and Retribution, which lasted for an amazing 12 seasons. The US beckoned and she wrote the US version of Widows, before returning to the UK to write The Commander series of TV movies about a female Metropolitan police commander (Amanda Burton).

Simultaneously, La Plante was also maintaining a career as a novelist, and in 2009, ITV began to adapt her Above Suspicion series of books as mini-series with Kelly Reilly and Ciaran Hinds, the fourth of which aired in January.

She is without a doubt, the most successful, high-profile female writer in UK TV history. Happy International Women’s Day, Lynda!

Event review: Andromeda at the NFT