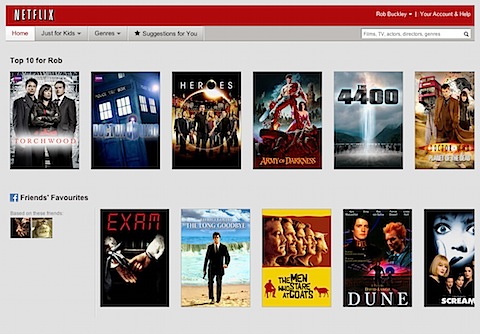 Netflix in the US is a massive force. Kind of like Lovefilm, it has a TV and film DVD rental service as well as an online streaming service, but it makes so much money, it can now afford to make its own programmes, including a remake of House of Cards with Kevin Spacey.

Now it’s come to the UK. Available on your laptop, your Apple TV, your iPad, your iPhone, your PlayStation, your Wii and probably your cooker as well, Netflix is simple to use, integrates well with social networks, and delivers a true multi-platform experience, all for £5.99 a month.

It’s just a shame there’s bugger all to watch on it.

Right from the outset, you can see why Netflix does so well. To sign up, you can use your Facebook credentials and PayPal, as well as credit card. You can use those credentials to sign in to whatever platform you’re on. Your first month is free and after that you’ll get charged £5.99, which covers everything you watch. Want to watch an entire season of a TV show? All covered in the price and you don’t have to wait for the DVDs to show up.

You can watch Netflix pretty much everywhere and I’ve tried on Mac, Apple TV, Wii and iPad. Stop watching on one and you can carry on on one of your other devices. It’ll keep a record of pretty much everything you watched and where you got up, so you can return to viewing at a later date.

Netflix will also make recommendations based upon what you’ve already watched, as well as what your Facebook friends have watched – people worried about privacy can deauthorise the Netflix app from posting to your wall, something I didn’t realise it could do (I was somewhat taken aback when I learned people had discovered my guilty secret that I’d watched an episode of Highlander and began commenting on my wall).

I found that Netflix’s recommendations sucked horribly – a painful death for it for even hinting that I might want to watch Torchwood – whereas by contrast my friends seemed to have impeccable taste.

How you view Netflix will obviously affect your opinion of the service. The web browser version for computers is very versatile, giving you a user-friendly interface, access to your Facebook Friends’ Favourites and more. It also allows you to set your quality preferences, something you can’t do on any other platform.

The Apple TV version isn’t quite as good, not offering you the Friends option, but otherwise much the same. The interface is almost identical to the Apple TV’s standard movie rental interface and even entering credentials wasn’t hard. Fans of The IT Crowd will be amused to know that if when you first try to use Netflix on the Apple TV you get an error message, the official Apple support advice is to try turning it off then on again.

The iPad interface is sleek and similar to the web site version. However, it lacks the ability to find shows that you’ve been watching recently. It knows which ones you have, but it won’t tell you which ones they are until you find them.

The play interface is similar to standard iPad playback, but with options for subtitles and Facebook sharing. 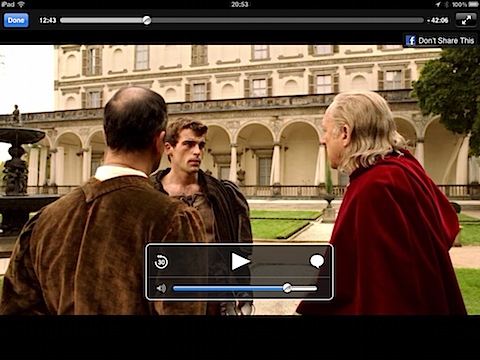 Netflix for Wii is perhaps the fiddliest, the most unreliable and lowest quality of the platforms I tested. You’ll frequently find yourself getting this message at first launch, once you’ve installed the Netflix app from the Wii store:

Otherwise, the interface is like a mix of the Wii and the Apple TV interface:

So all well and good. It’s easy enough to search for things, easy enough to view them, etc. It’s relatively cheap, roughly the same price per month as a 1.5 Apple TV HD rentals. So what’s the catch?

Simple – there’s not a lot to watch. Look at that screen above – apart from an understandable obsession with Amber Heard, the action & adventure category has 75 films. Yes, just 75. There’s a surprisingly large range of martial arts movies; there’s quite a few golden oldies and you’ll be able to spot a few surprising gems here and there (Requiem for A Dream, The 39 Steps, 1984, etc); there’s a good range of Jason Stathams. But generally the film category is anaemic, and has an odd classification system (Equilibrium a cerebral film?). Literally every film I searched for that I wanted to watch wasn’t there.

On the TV side, there’s a few shows you can watch, including some Doctor Who, some Torchwood, Heroes, The 4400, Misfits, and Breaking Bad, as well as a smattering of Channel 4 shows like The Inbetweeners and Ramsay’s Kitchen Nightmares. But you’ll find yourself staring in envy every time you see a poster for (the slightly cheaper) Lovefilm advertising the whole of Lost or Cougar Town for example. Yes, there is the Netflix exclusive of Borgia, the European co-production version of the Borgias saga, but as I hinted at when I reviewed it, that’s not the best of exclusives to have.

The test in all these things is in how you much you actually use it, and at the moment, I’ve had my money’s worth from the service, but not much more. It desperately needs some better content, particularly since the New Releases section seems to be more or less unchanging.

If you’re looking at this to be an instant source of whatever content you could possibly hope for at a moment’s notice, at a cheap, monthly price, you’ve come to the wrong place – try Lovefilm. But having said that, if you’re the kind of person who is a bit adventurous and wants to be presented with some random viewing, such as a film you might have seen a long time ago but forgotten about, a classic you’ve always been meaning to watch, or a TV series that’s a bit obscure and you want to watch from the beginning, then Netflix can be a source of serious serendipity at a good price. And you can bet your bottom dollar with the cash Netflix has, that content is going to start improving soon.

Not all movie actresses are monolingual

In the US and UK, monolingualism feels like the default. Speak more than one language? Crazy, particularly if we’re aiming for fluency rather than asking “¿Donde esta la biblioteca?’, ‘Où est la Gare Saint-Lazare, s’il […]