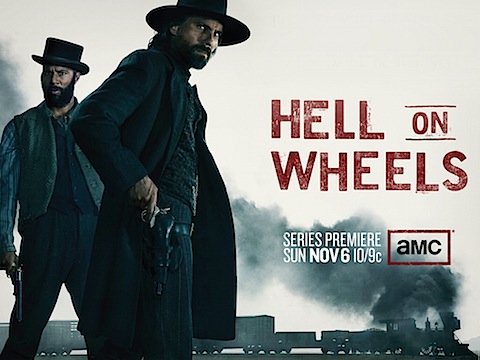 There’s been a lot of talk this season about AMC’s Mad Men. The Playboy Club and Pan Am have both supposedly been trying to emulate the success of Mad Man by both being set in the 60s and allegedly glorifying sexism, racism, et al. The parallels are relatively few and often spurious but what people have latched onto in this 60s setting. Apparently, until Mad Men, period drama didn’t happen on US TV so clearly anything period must owe a debt to Mad Men.

The western was once the mainstay of US TV: Bonanza ran for 13 years, Gunsmoke ran for 20 years and there were countless others. Modern day TV networks also haven’t forgotten the western: HBO had Deadwood while FX’s Justified is essentially a western set in modern times; and even as I type, the development slates at various US networks are already filling up with a whole new batch of westerns, ready to be unleashed on us next September, including a remake of the classic TV western The Rifleman.

But now look. While everyone’s been fixated on the 60s as the Mad Men USP, AMC – the home of Mad Men – is trying its hardest to cash in on the success of its own, currently absent show (as well as its first ever original mini-series, Broken Trail) with another period piece that relishes the mores and prejudices of a rapidly changing American society. Can you guess when it’s set?

About
Hell on Wheels is a contemporary Western that centers on former Confederate soldier Cullen Bohannon, portrayed by Anson Mount, whose quest for vengeance has led him to the Union Pacific Railroad’s westward construction of the first transcontinental railroad. Developed by Endemol USA and produced by Entertainment One (eOne) and Nomadic Pictures, Hell on Wheels is created, written, and executive-produced by Joe and Tony Gayton (Faster, Uncommon Valor, The Salton Sea, Bulletproof). The series premieres Sun., Nov. 6 at 10/9c.

In addition to Mount (City by the Sea, Cook County, ABC’s Line of Fire), Hell on Wheels stars musician-actor Common (Just Wright, Date Night) as Elam, Dominique McElligott (Moon, The Philanthropist) as Lily Bell, Colm Meaney (The Conspirator, Get Him to the Greek) as Durant, Ben Esler (The Pacific) as Sean, Phil Burke (Mercy) as Mickey, and Eddie Spears (Into the West) as Joseph.

Hell on Wheels tells the epic story of post-Civil War America, focusing on a Confederate soldier (Mount) who sets out to exact revenge on the Union soldiers who have killed his wife. His journey takes him west to Hell on Wheels, a dangerous, raucous, lawless melting pot of a town that travels with and services the construction of the first transcontinental railroad, an engineering feat unprecedented for its time. The series documents the railroad’s engineering and construction as well as institutionalized greed and corruption, the immigrant experience, and the plight of newly emancipated African-Americans during Reconstruction. Hell on Wheels chronicles this potent turning point in our nation’s history and how uncivilized the business of civilization can be.

Is it any good?
As I pointed out during my review of AMC’s The Killing, Dan Harmon, the creator of Community, once joked that anyone who pitches a series to AMC must get stopped after the first sentence. “Whoa whoa, save some of this for season two!”

Yes, AMC shows are slow and Hell on Wheels, while practically fever-pitched compared to Mad Men, Rubicon, The Walking Dead et al, really takes its time getting into gear, despite all its best efforts to be action-packed.

So let’s start off by telling you something you won’t find out until the end of the first episode: this is a whodunnit. Like all good westerns – and I don’t mean this in a complimentary way, I mean it in a “how unoriginal” way – Hell on Wheels sees one man fighting to avenge someone who’s been done wrong: in this case his wife. To do this, Cullen Bohannon (Anson Mount) gets a job in the town of ‘Hell of Wheels’, where the shiny new railroad is being built. There he gets a job from railroad boss Ted Levine (Silence of the Lambs) and he discovers – or rediscovers, because he was a slave owner and fought for the South during the civil war – that black men working on the railroad are treated badly, particularly one guy called Elam (Common – yes, the rapper). No big revelation there, but he doesn’t care much because he’s on his mission of vengeance.

Meanwhile, Colm Meaney (Deep Space Nine), who owns the company building the railroad, is busily schmoozing and beating people up, while simultaneously trying to milk the government for all it’s worth by taking the railroad on the most circuitous route possible.

Double meanwhile, we have Irish actress Dominique McElligott (Moon, the pilot episode of Being Human), pretending (rather well) to be a Brit, off with her sick hubby in Cheyenne country, surveying the land. Three guesses if that ends well.

Triple meanwhile, we have giant vicar Tom Noonan (Manhunter – yes, finally Levine and Noonan in the same show together) baptising sinners, including one native American and, if they’ll let him, the local prostitutes.

And quadruple meanwhile, we have a couple of semi-literate Irish lads off seeking their fortunes with singing and slideshows.

If that all sounds a bit big and ‘ensembly’, almost like there are several different shows stuck together in one, well the cast would seem to agree with you. Because they can’t seem to agree on what kind of show this is. On the one hand, you have McElligott, Noonan and Mount playing this like it’s drama; on the other, we have Levine, Meaney, Common and the Irish lads all playing this like it’s a comedy. Mostly, they’re in separate scenes, but when they come together, it’s jarring.

Supposedly showing the cost in human life needed to get the railroad built, this tells us nothing that anyone reasonably conversant with American history wouldn’t already have known. As a western, until the revelation at the end of the episode, the show lacks real cohesion. It’s just a greatest hits, showing us not even the best bits of any number of better westerns, ranging from Kung Fu on TV in the 70s through to Dances with Wolves and The Last Samurai from the last two decades.

So there’s a lot of Big Fail written all over this. It’s not for want of trying though. Mount, McElligott and Noonan are all very good, McElligott being particularly sparky and interesting; Meaney is actually very funny, more of a Wild Wild West villain than one of Sterling Cooper’s corporate adversaries. It looks very pretty and authentic, even if it doesn’t sound it or truly embrace the attitudes of the time à la Mad Men. The native American side of things is actually quite interesting. And it is a damn sight faster paced than anything else on AMC.

But, just as with Mad Men, I sense that a large part of the show is going to involve working out what the hell it’s about and whether it’s going to be worth watching or not. If it has a message, it’s not telling us what it is or whether it has one and beyond a conditioned reflex to cheer for the lone stranger out for vengeance, there’s not much reason to cheer on Mount on his cliched quest.

There’s more than a few things to like about the show. It does combine a lot of familiar elements in unfamiliar ways. There is a certain absorbing quality to it. And the show’s going to have a slight change of direction with episode two as a result of that end revelation, so it has the potential to become better. But is there anything like the flashes of brilliance that AMC’s other successful shows all had in their very first episodes? No.

Shows you what happens if you try to copy something, even if it’s one of your own shows and you copy in a different way from anyone else.

The pick of the new US shows (November)

What’s worth watching of the new shows on US TV (November update)?

The news for Monday 7th November 2011

What have you been watching this week (w/e October 1)