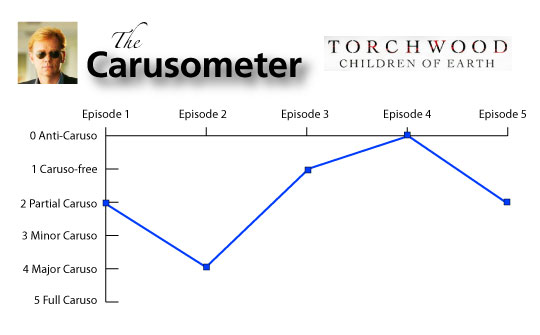 Ladies and gentlemen, we have a first. Some thought it impossible, like finding a news outlet that hasn’t mentioned Michael Jackson once in the last week. Some thought it could never happen.

But it has. An episode of Torchwood got a 0 on the Carusometer. It was really, really good.

After the break, let’s discuss how this could have happened and the whole series in spoilery detail: you have been warned, those of you who haven’t watched it yet.

As you may recall, episode one of Children of Earth was moderately pleasing, if a little slow, thanks to the intervention of Russell T Davies, series creator, who proceeded to dismantle the whole show’s set-up and demonstrate to everyone how it was supposed to be done.

Episode two was problematic. Co-written by Rusty and James Moran, it was slow and very silly in places, not really furthering things much, and getting a bit close to A For Andromeda at times. I can think of a lot of ways of making sure a regenerating man can’t recombine, such as “not sticking all his bits together in the same place”, and I’m pretty sure hiring male models in black poser outfits is probably bad security protocol when you’re guarding a top-secret installation. It was enough to make think the whole thing was falling apart.

After episode two, however, things began to look up as it became abundantly apparent that Rusty wasn’t riffing on A for Andromeda but was in fact appropriating Nigel Kneale’s classic 70s bit of misery, Quatermass. For the uninitiated, Quatermass sees civilisation is collapsing thanks to the advent of aliens who quite like feeding on children so zap them up with a great big beam of fire. Only (spoiler) the sacrifice of the hero’s grandchild using the aliens’ own technology will be enough to save the world.

But, there’s nothing wrong with that. Would that bleak sci-fi got more of an airing on British mainstream TV. Or Quatermass for that matter.

By episode four, we had full on bleakness once the nastiness of the whole set-up was apparent, and some wonderful moments, such as the use of school league tables to decide which children should be sacrificed – incidentally, what is it with Rusty and slaughters of 10%? First the Tocla-whatsits; now this.

And then, of course, came the death of Ianto at the end. Had they not killed off 50% of the cast at the end of the last series and spent a little more time in earlier series giving Ianto some decent characterisation and skills, maybe that would have had more of an impact. As it was, even if it wasn’t the ultimate OMG it would have been had Gwen or even Jack been topped, they made it about as moving as they could in the time available, so kudos to them all the same – and for not raising him from the dead, Heroes-style.

The last episode was typically Rusty, with compulsory tearjerking sacrifices, aliens killed by sympathetic magic rather than a really well thought out plan, a complete inability to grasp even the basics of politics, world affairs, etc, and a bizarre conclusion that makes you wonder if it was hastily cobbled together when the budget for the giant Tyrannosaurus fell through at the last moment. I’d have been more impressed if they’d literally been unable to do anything at all to the 456, leaving the world to cope with the knowledge of its own impotence. Or if the Doctor had shown up – that would have been a crossover worth having.

It also left us with a lot of questions. Why’s Jack running away? Why has he spent most of the series as his series one Torchwood self, rather than series two? Is Gwen’s theory for why the Doctor didn’t turn up plausible or is it because the producers didn’t want him showing everyone up? If series four is going to happen, who the hell is going to be in it, and what’s it going to be like? Where are the other 456? If they had all those powerful “child manipulation” powers, why couldn’t they just have rounded them up themselves? Why are Torchwood so shit? Would it have helped if they’d had a training budget? Why did the 456 need so many kids if 12 was enough the first time? Why didn’t Martha Jones give the Doc a call on her phone? Why did the 456 leave Clem behind? And so on.

Overall, though, Torchwood – Children of Earth was the first time the show has come close to fulfilling its potential, and the first time Rusty’s managed to avoid the full magic reset button. It was gripping and compulsory viewing by the end of the week, even if the final episode was a slight letdown after the build-up before it.

Fingers crossed that whatever Rusty plans for his true baby after getting rid of the deadwood this season is as impressive as this.

And the winner of the Torchwood competition is…

In which I announce the winner of the competition.