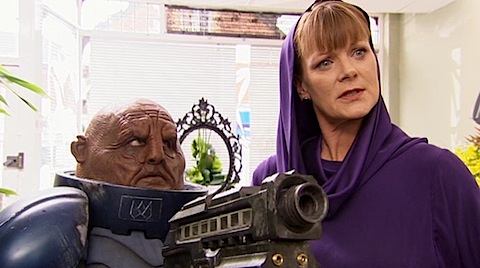 OMG. It’s like totally the final episode. And like team Sarah Jane are in so much trouble. If only there were like a really old, slow-moving dude who could help them.

Plot
Luke and Clyde are trapped by the evil Bane. Fortunately, the even eviler also-Bane, Mrs Wormwood, is on hand with inept Sontaran Karg and his battery charger to turn her squiddy brethren into a thick creamy discharge. Ew.

However, Sarah Jane currently on the run from UNIT with the Brigadier and (the) Rani in tow, cunningly deduces that Wormwood must have had help and that she’s therefore Evil.

But, oh no, Karg crushes her sonic lipstick, takes them all prisoner at the flower shop – he was after some lilies – and to save everyone’s lives, Luke volunteers to go with Wormwood and Karg to release the mighty power of the Tunguska scroll and end the universe.

After Wormwood bitch-slaps Karg around a bit to show him who’s boss, they all head off to the Juganet Welsh English stone circle where the handy hole for phallic-shaped alien devices is embedded in an altar. Luke inserts his rod and opens up a portal, much to everyone’s excitement. Ew.

But then, brave Karg decides to sacrifice himself to recover his honour and the universe is saved in time for lashings of ginger beer.

Is it any good?
It was better than last week’s, although the mirror plot to the Beserker two-parter – will Luke choose birth mother over adopted mother? – started to get a bit too much like text rather than sub-text at times.

The Brig got something to do although he did it really slowly, so he wasn’t wasted as much as last week. Everyone got to act so OTT, you might have thought you were watching a kid’s show and once again, Clyde’s school trips prove to be very educational and helpful in establishing galactic justice.

A bit too much running around and Sarah Jane shouting for comfort and Karg was too easily slapped around to be convincing as, well, anything. But a pretty good ending for the two-parter and indeed the series.

Overall, probably pitched more to a lower age than the first series and the standard of stories wasn’t so high – plus there was far more repetition of previous and Doctor Who themes than last year. It also looked a tad cheaper, IMO, and Lis Sladen’s starting to get a little bit too over-emotive. Plus (the) Rani and her family still aren’t a patch on Maria’s lot.

Enjoyable all the same, even if it wasn’t quite as well-developed.

Pick a cover, any cover

A look back at the fourth series of Doctor Who