Right. Well, I’m off on my hols. I’m trundling through freezing fog down to Swansea for a few days, then spending Christmas at a hotel in Cardiff (no, not with John Barrowman), before trundling back to London for the New Year. Guess how much blogging I’m going to be doing during that time.

So don’t be too upset if there’s nothing here until the start of January. As someone once said, “One day I shall come back. Yes, I shall come back. Until then there must be no regrets, no tears, no anxiety. Just go forward in all your beliefs and prove to me I’m not mistaken in mine.”

Anyway, I’ll probably look in from time to time to field questions, correct my usual typos and general factual inaccuracies, and if there’s anything you think I should be watching or even reviewing, let me know below.

Until then, Merry Christmas and a Happy New Year, one and all!*

*Except for you guys who don’t believe in Christmas, in which case Happy Holidays**!

** Unless you’re working, of course. That would be a bummer.

There’s a certain expectation with prequels. At the end of them, you’re supposed to go, “Oh, that‘s why he/she/it did that.” Everything’s supposed to line up with the subsequent stories. It worked with Batman Begins; it sort of worked with Enterprise; even Foundation and Earth and House Atreides et al filled everything in and left you thinking you understood everything a little better. If I sat down and thought about it, I could probably come up with some non-SF prequels that did the same.

So why don’t I feel that way having sat through the whole of I, Davros? Actually, why do I feel ripped off by the whole mini-series?

END_OF_DOCUMENT_TOKEN_TO_BE_REPLACED

Thanks to Anna for nominating me (although I’m not yet on the official list), and congratulations to everyone else for their nominations. Further details over at the awards site. Don’t forget to nominate your favourite blogs as well, if you haven’t already. 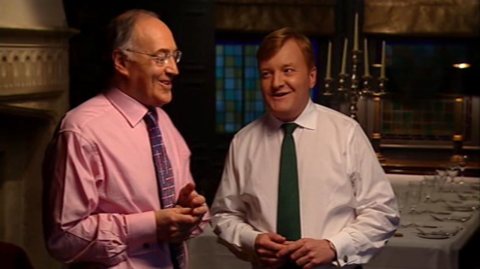 Aha! The much heralded 30 Greatest Political Comedies! No, really, it was. Okay, I’m lying, it wasn’t.

I mean let’s face it, if you were the More4 marketing department, would you bust a gut in the run-up to Christmas, promoting a list show voted for by MPs? No. Me, neither. I’d be off with Tiggy, Mimzin and the other PR girls, drinking cosmopolitans at that super new bar that’s just opened near Victoria.

So it snuck out last night with the stealth of Jack Bauer, a knife clenched between his teeth, throwing a terrorist’s body overboard to cover his tracks. Hosted by two Thunderbirds puppets with uncanny resemblances to Michael Howard and Charles Kennedy, the show listed, surprisingly enough, the 30 political comedies that MPs felt were both the closest to real life and the funniest. Ranging from the election night sketch in Monty Python’s Flying Circus to Yes, Minister and The Thick of It, the shows got hyped by various sitting MPs, journalists and broadcasters, strung out on speed and intravenous drug-using Dutch prostitutes.

See? That’s what happens when you watch shows about politicians. They rub off on you and you start lying every five seconds.