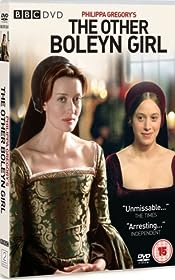 This should probably be called The Other The Other Boleyn Girl, given there’s a multi-million dollar effort with Eric Bana, Scarlett Johansson and Natalie Portman out on DVD right now, too. Also based on Philippa Gregory’s book of the same, this is a study of Mary Boleyn, Anne Boleyn’s elder sister and fellow mistress of Henry VIII. Made for the BBC in 2003 and starring Natasha McElhone, Jodhi May, Jared Harris and Steven Mackintosh, it’s cheaply made yet more powerful and more innovative that its highly turgid American cousin.

It’s quite a traumatic tale, with happy newlywed Mary finding that the king’s interested in her and that both her husband and her father want her to take up with the King to advance their standing in court. Reluctant at first, not least because she regards adultery as a terrible sin, Mary eventually falls in love with Henry and as history recounts, it all goes pear-shaped after that.

The adaption is relatively faithful to the book, although it does skip over big chunks of the narrative – unlike Hollywood, however, the BBC adaptation does at least make clear where there have been jumps of a year or so, something that made the big screen version less than coherent at times.

You couldn’t describe it as historically authentic, though, because despite its best efforts, Gregory’s book isn’t to be trusted on all its details – rather than being a pious so-and-so as Gregory suggests, most of the records hint that Mary was a bit of a goer – and McElhone is obviously too old to play the teenage Mary. I won’t go into the incest stuff either, although Gregory usually does, more or less in every book she writes. Hmmm.

The oddest part of this adaption is that it’s shot on grainy video almost as a reality TV show (complete with partially improvised script), with Mary and Anne both offering video diary-like pieces to camera at various parts of the narrative. This more radical approach does involve you, but it also distances, since its fast cuts and shaky-cam mean you spend more time being fascinated by Philippa Lowthorpe’s direction than having a chance to get involved with the characters.

McElhone’s as good as always; May seems far less devious than other Anne Boleyns you might have seen (on The Tudors for example); Jared Harris, who plays Henry, turns in pretty much the same performance he did in To The Ends of the Earth, which is good in its way but doesn’t seem particularly Henry-ish (again, age seems to be a factor); and Steven Mackintosh is okay in a difficult role: the gay, incestuous (as written by Gregory, anyway) brother George Boleyn.

If it’s a toss-up between the big-screen version and this one, get this one, if only because it’s better and considerably cheaper. But probably only worth getting if you’re a big history buff.

Here’s the first few minutes to give you an idea of what’s it’s like:

Incidentally, Philip Glenister’s in it as William Stafford, Mary’s second husband. Someone’s stuck all his appearances in it together and uploaded the result to YouTube. Enjoy!

Monday’s “RDM to adapt A Knight’s Tale, Treme gets a short fourth season and Helen Mirren to play The Queen again” news