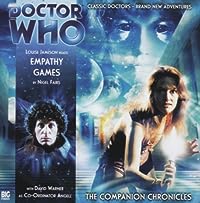 What’s up here? This is getting silly. Not only has Louise Jameson already starred in three entire series of Gallifrey already, she’s been in the Tomorrow People plays, the last Sapphire and Steel play and a previous Companion Chronicles piece, The Catalyst. Now she gets another one? What did Mary Tamm, Janet Fielding, Sarah Sutton and Matthew Waterhous do wrong? Actually, don’t answer that.

Of course, the quick answer is that Big Finish producer Nigel Fairs seems to like Jameson, given that he’s responsible for writing and directing a sizable number of the plays I just listed. In fact, this follows on directly from The Catalyst, at least in storytelling metaphor, even if the story itself is set at a more random point. Co-starring David Warner (oh look, another Big Finish fave. Fancy that.), the play isn’t as good as The Catalyst and feels like a couple of old Blake’s 7 episodes cobbled together.

Plot
The present: Leela is doomed, trapped inside a prison cell of a dead race.

The past: After a disaster aboard the TARDIS, the Doctor and Leela arrive at the capital city of Synchronis, a world renowned for peace and civility. But an attack by a vicious creature leaves the Doctor in a coma, and Leela is persuaded to fight in the forthcoming Empathy Games, where she discovers that nothing on this world is as it seems.

Is it any good?
In contrast to Nigel Fairs’ other work, which normally have excruciating first halves and not bad second halves, this has a not bad first half and an excruciating second half.

Essentially, it takes quite an interesting idea for a Companion Chronicles play – Leela’s a warrior so why not set her in her element? – then ruins it a bit by making it all sci-fi and combining it with Blake’s 7‘s Death-Watch and Rescue – with just a hint of The Island. Yuch.

In true Fairs fashion, it takes a while to work out what’s going, which is nice, although it hardly seems worth it when the revelations come through. We also have a bit of continuity explanation throw in for luck (why the secondary console room stopped being used).

However, it doesn’t feel like a season 15 or 16 story, although it comes close to Robots of Death at times. And the "why am I telling you this story?" raison d’etre normally present is pretty perfunctory, if not silly, given the story Leela ends up telling.

Warner is excellent, as he always is when he’s not doing those wretched Sapphire and Steel plays, and Jameson’s pretty good – although it’s a bit of a mistake to get her doing a cockney accent for one of the other characters: this would have been one instant where a third actor would have come in handy.

The music is a bit sucky and doesn’t remind you at all of Dudley Simpson’s oeuvre (is that good or bad?) even though all the other sound designers for the range have managed to recreate the corresponding eras pretty faithfully.

One for the biggest of Leela fans only, I’m afraid.

Full season and a returning agent for SHIELD, and Richard Belzer leaves L&O:SVU

My review of the Torchwood episode Adrift
[…]