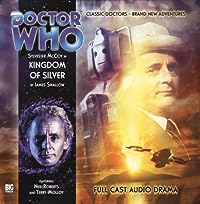 Two questions. First, do you think there’s a reason that the seventh Doctor has been particularly companion-bereft of late? The Big Finish-ies claim it’s because they want to explore the ‘vast’ time that he’s alone before the TV Movie. I’m wondering if so few people are buying the seventh Doctor audio stories, they can’t afford companions as well. Or maybe they don’t like Sophie Aldred.

Question two: why do writers bother trying to be clever with Big Finish? Here we have a cyberman story. We know this because there’s a great big cyberman on the front cover and because the story’s Kingdom of Silver. Mondas gets mentioned halfway through the first episode and one of the ‘houses’ in the play is called Argentum (sp?). So what’s the big cliffhanger at the end of episode one? OMG, it’s a cyberman! Who saw that coming?

Plots
Kingdom of Silver (A Three-Part Story)
The Doctor arrives on Tasak in search of refreshment, armed with nothing more than a kettle. But this is a time of crisis for a civilisation about to enter an industrial age.

Mindful that a devastating war is only recently over, the wise and revered Magus Riga will do almost anything to save his people from the follies of the past. But the road to hell is paved with good intentions. And the planet Tasak is host to ancient powers buried deep and long forgotten. Can visitors from another world avert disaster or will their intervention drag this innocent world into the Orion War?

Keepsake (A One-Part Story)
Sifting through the technological junk of Reclaim Platform Juliet-November-Kilo, the Doctor discovers evidence of a personal tragedy involving some friends of his. Where will the story of their fate lead?

Is it any good?
With some Big Finish plays, you find yourself sticking pins into your legs to stay awake or to avoid the terrible numbing pain gettting to you. With others, you think "Ooh, that’s pretty good." This falls pretty much in the middle, a reasonably average Big Finish play of no real note other than it’s the introduction to the new Cyberman series that Big Finish is launching soon.

It’s a pretty traditional piece, in which the Doctor lands on a planet, stupid planet people have uncovered cybermen hardware and don’t know the terrible things that will happen if they meddle, cybermen wake up, things go wrong, etc, etc.

There’s nothing really remarkable about it at all, in fact. The cast are all okay, even Sly, although Nick Briggs is in it too much; there’s nothing bad or great about the direction; there are a couple of daft moments where you want to give the cybies a slap on the back of their heads and a bit too much sci-fi waffle; even at three episodes, it feels a bit padded. It’s okay.

I have to confess, I couldn’t be bothered to listen to the standalone play at the end, mainly because it involves many of the same characters as the first play – and that didn’t motivate me to stick around.

A bit of a waste of money overall for me, but I’m sure cybie fans will love it.

Another scoop from BBC Norfolk