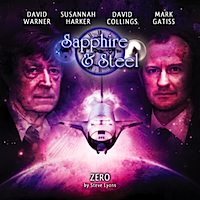 If you’ve spent enough time reviewing the Big Finish plays as I have, sooner or later you begin to ask yourself the question "What’s the point?" To put it bluntly, there’s more than a few that have been complete rubbish. There are entire ranges that are almost pure rubbish, such as the Eighth Doctor/Lucie Miller plays and the Sapphire and Steel range. So what’s the point in spending time listening to them and reviewing them if all you’re going to end up doing is variants on "Oh my God, why?" There are more constructive things to do with your life.

It’s been a long time coming, but it’s finally here: it’s the first excellent Big Finish Sapphire and Steel play, Zero. Except it’s Gold and Silver who have been assigned this time.

Plot
All irregularities will be handled by the forces controlling each dimension. Transuranic, heavy elements may not be used where there is life. Medium atomic weights are available: Gold, Lead, Copper, Jet, Diamond, Radium, Sapphire, Silver and Steel. Sapphire and Steel have been assigned.

The Space Shuttle Aspirant is in a decaying orbit, its engines dead. Time is running out.

Is it any good?
It really is. Unlike in previous S&S plays where you have to wait for an entire CD before they get going, Zero is good from the outset with Gold and the recently freed Silver investigating some mysterious goings on aboard a space shuttle, which has seen all but one crew member die, the other seemingly in a coma.

Interestingly, unlike other plays that have focused on the intrinsic scariness of the old that most of the TV stories evoked, this is the first to really go for Adventure Three sci-fi scares. Setting the entire play in the enclosed environs of a space shuttle in decaying orbit works very well and adds considerably to the claustrophobia.

Initially, the play involves purely Silver and Gold, and for quite some time, the pairing of David Collings and Mark Gatiss is sufficiently good that you start to wish they’d be the regular elements and boring old Sapphire and Steel could be trapped in a motorway cafe again.

However, the ostensible heroes soon turn up and the play starts to revert back to standard territory. Except it doesn’t. After all this time, we finally get some hints that Sapphire and Steel aren’t quite the pushovers we’ve been led to believe, as they finally begin to exert some power.

We also get the first signs of some editorial oversight worth mentioning for the series, with the series arc of the war with the Transient Beings surfacing again, and indications that the overly human Sapphire and Steel of the Big Finish plays aren’t just poor writing but are character development (albeit unwanted character development). Even that gets a thorough examination from writer Steve Lyons, with the villain of the piece giving it a much-deserved alternative analysis.

Although the play wobbles occasionally, overall it’s excellent, with some excellent performances, a great script and some decent sound design for a change. Thoroughly recommended.

ITV to remake Sapphire and Steel?

My review of the Big Finish Sapphire and Steel web site

A preview of NBC’s Revolution
[…]