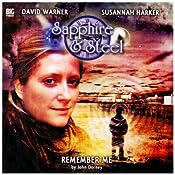 What is it about Big Finish and piers? Every time they want to do somewhere creepy, they send the cast off to a pier to get tormented by comedians and Punch and Judy. Piers are the sandpits of the modern audio horror age, apparently.

This time, though, it’s Sapphire and Steel who have been assigned to the sea-front, rather than the usual Doctor Who crowd. In the company of Sam Kelly from ‘Allo, ‘Allo and plenty of other Big Finish plays (The Holy Terror, Return to the Web Planet), Joannah Tincey and David Horovitch, our heroes, David Warner and Susannah Harker, manage to wend their way through an above-average S&S tale that for once, contains an interesting idea or two.

Plot
All irregularities will be handled by the forces controlling each dimension. Transuranic, heavy elements may not be used where there is life. Medium atomic weights are available: Gold, Lead, Copper, Jet, Diamond, Radium, Sapphire, Silver and Steel. Sapphire and Steel have been assigned.

A faded sitcom star wanders through the darkness of a deserted pier, haunted by the ghosts of his dead colleagues.

Is it any good?
As with most Big Finish Sapphire and Steel plays, it doesn’t really kick off until the second half. Until then, it’s more than a bit tedious, as we have to deal with relentlessly stupid people, rubbish stereotypical comedians and "issues".

The thing that was good about the TV show was the alien nature of Sapphire and Steel. Here, though, as always in the Big Finish plays, they’re too human. Steel’s not bright and the first metaphor he can construct for their situation when discussing it with Sapphire is of a "game of snakes and ladders", rather than "that time loop like you stuck the policeman in in Adventure 1", for example. Play a lot of snakes and ladders, do you, Steel?

But apart from the uncharacteristic nature of Sapphire and Steel, the play’s not bad once we hit the second half. Indeed, unlike with certain plays, there isn’t a clear quality jump going from part one to part two: it’s better, it’s just that the first half isn’t so poor the second half stands apart from it in quality.

Another thing that distinguished the TV show was the nature of the enemies: they were invariably a concept almost independent of the action and the human characters. Big Finish, however, almost always make the baddie a product of the human’s actions – and pick a solution that requires the humans as a result. I won’t tell you what happens here, except suffice it to say the less satisfying standard is in operation.

There are some clever ideas involved though and perhaps the most surprising part of the play is that Sapphire and Steel manage to destroy the enemy. The ending is also good, even if the play is once again too long by 15-20 minutes.

Kelly’s performance is a bit too crusty, Tincey’s a bit weak but Horovitch is excellent as the multi-faceted baddie.

One of the better plays in the range.

What did you watch this fortnight? Including Trance, Rogue, Bates Motel, Endeavour and Southland

My review of the Doctor Who stories Human Nature and The Family of Blood.

My review of the Big Finish Sapphire and Steel web site