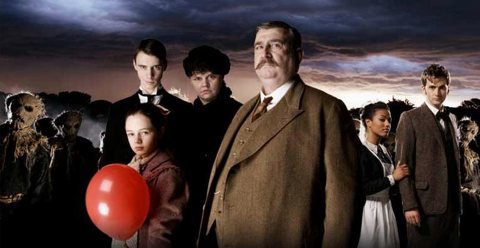 I say this not to boast – although wey hey! – but because it’s a truism that it takes a big man to admit it when he’s wrong.

I admit it. I was wrong. Paul Cornell can write. He can write very well (subject to any possible script edits made by RTD, Helen Raynor, et al).

What a great two-parter. It was moving, well acted, had a very scary baddie, great effects. Something for everyone in fact. Even when wearing my patented Helm of an ADHD Eight-Year Old, I could cope with the slightly slower moving adult (aka intelligent) bits and bask in the scary scarecrows, who had a touch of the Michael Jackson backing dancers about them at times.

We had a touching love story, beautifully played by Jessica Hynes and David Tennant – or should that be “loss of love” story? I confess I did have little dewy drops of water in my eyes by the end of the second part. Sweet FA pulled out all the stops and although she’s clearly an actress afflicted by a wooden tone of voice, did a very good job playing the still somewhat stalkery Martha*. She even made it through the anatomy lesson, sounding like she knew what she was talking about. And chief scary public school boy managed to be a Doctor Who villain, overact massively and still come out of it looking great. Do you think it was the absence of obvious merchandise-oriented catchphrase that helped?

Then there’s the story itself. What seems at first like a simple plot gimmick (“Hey, let’s make the Doctor human this week!”) becomes something far more powerful over the two episodes as John Smith and The Doctor begin to diverge in personality. We get to like John Smith, who stops being a disguise and takes on a life of his own, and almost dislike the Doctor, whom we see in a far clearer light, his alien character traits no longer taken for granted and becoming something almost to be avoided.

Cornell couldn’t help himself, of course, and had to include the typical “cor, weren’t we backward then with our politics” references – Really? Nearly 100 years ago? No poo, Poirot –  watered down and slathered in lashings of hot anachronisms, of course, to cope with modern viewing sensibilities and the teatime slot. But bar the somewhat mawkish, bolted on World War I bits and the Private Ryan-esque memorial service (wouldn’t the Doctor wear a white poppy?), these were more than tolerable and probably were added as some piece of Reithian education for the ADHD eight years old.

Cornell has redeemed himself

And lastly, there was the continuity, aka Whovian porn. Oh sweet, sweet continuity. There were multitudinous references to previous Tennant and also Eccleston stories. But we also had references to Pertwee’s The Time Warrior (“Isn’t that in Ireland?”), Remembrance of the Daleks (evil little girl dancing music), Sydney Newman and Verity Lambert (John Smith’s parents. Sydney Newman was one of the creators of Who and Verity Lambert was the first producer) and – oh my – actual, yes, actual confirmation that both Sylvester McCoy and Paul McGann (and maybe Colin Baker) were previous versions of the Doctor. I’m going to have to lie down now.

I have a few, almost trivial criticisms: there were obvious plot holes and some ludicrous science (but hey, it’s Doctor Who); the direction wasn’t nearly as good as Graeme Harper’s was for 42, with pacing problems at times; and aargh! the incidental music, which I’ll be assailing again later on in a new feature for these reviews, The Murray Gold Watch.

The story clearly also betrays its origins as something intended for the seventh Doctor. While we’ve had hints of a darker 10th Doctor in the Christmas special, he’s never really been one to do something so calculated and cold as to punish evil-doers, rather than simply run away from them a lot and point his screwdriver at them. The eventual fates of the baddies, while absolutely wonderful**, are far more in keeping with McCoy than Tennant. If there’s more of this, hoorah! If not, it’s most odd and uncharacteristic***.

Undoubtedly the best written of the series so far and maybe of all the new Who episodes bar Steven Moffat’s contributions, with these two episodes Cornell has redeemed himself. You may now discuss him in my company and I won’t be offended.

This week, Murray Gold was mostly drowning out the dialogue and removing all sense of drama by deriving music from… the Harry Potter films

The inevitable footnotes
* Given we’ve now gone into “Martha as official companion” mode and the episodes don’t necessarily follow directly on from one another, we can at least give her more benefit of the doubt now, since it’s possible she’s been with him for weeks and weeks at this point.

** Fair dibs, Cornell, although did I spot another hint of Sapphire and Steel in there with the mirror girl? Once in Father’s Day could be a coincidence, but twice now? Tut tut

I’m giving up on Torchwood.