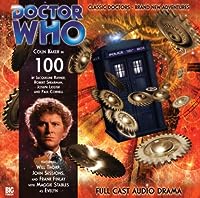 Big Finish has been producing Doctor Who audio plays for quite some time now. In fact, it shouldn’t surprise too many people that 100 is in fact the 100th Big Finish release.

It’s an odd choice for such a numerically momentous occasion. Unlike the first play, The Sirens of Time, or the 40th anniversary play, Zagreus, this is no great gathering of Doctors, no massive continuity-wrangling extravaganza of story-telling.

In fact, it’s more of an internal congratulation, a gathering together of Big Finish writers from over the years, including Robert Shearman and Paul Cornell. Consisting of four short stories, it improbably stars just Colin Baker as the sixth Doctor and Maggie Stables as his Big Finish-only companion, Evelyn – seriously, that’s their A-team for their 100th release? Colin Baker maybe, but Maggie Stables?

As a bit of back-slapping, it’s fine. But as something you’d pay money for, it leaves a lot to be desired.

The Doctor and Evelyn arrive in Rome, 101 BC, approximately, October. They meet a young lady of 19, Aurelia. She mentions her husband – Julius Caesar. Evelyn is excited, but her excitement soon turns to confusion. Surely you can’t heal a wound in time with just a bit of sticking plaster?

2. My Own Private Wolfgang

Wolfgang Amadeus Mozart. Born in 1756, a veritable wunderkind – playing music for the crowned heads of Europe as an infant, composing by the time he was five years old. But it’s tempting to wonder whether his amazing longevity has overshadowed his creative genius – would Mozart’s music be better respected, maybe, if he’d died as a young man? Would he be a legend of music, rather than of scientific curiosity, if he’d never lived to compose the film score for the remake of The Italian Job?

Once upon a time…

Jacob Williams is going to tell the tale of Sleeping Beauty but he realises he has told that one too many times so, instead, tells of how he once met this man called the Doctor…

Someone has assassinated the Doctor.

Some of the four are better than others. 100 BC is essentially a comedy piece, and not a very good one, with Evelyn proving increasingly irritating as she tries to ensure Julius Caesar turns out as Julia Caesar. Why the doctor doesn’t just stick her in a ditch when she tries to destroy the timeline as we know it, I don’t know.

Like 100 BC, My Own Private Wolfgang is a distillation of some of Big Finish’s worst tendencies towards silliness, with John Sessions playing the part of Wolfgang Amadeus Mozart several times. It’s clever; it’s funny; but ultimately it’s just a bit pointless.

Bedtime Story is a bit nastier, a bit more interesting, but a bit more tiresome as well. It’s hampered by Stables’ wobbly performance and some dire attempts at relating to everyday, normal people.

The last and most impressive story is Paul Cornell’s The 100 Days of the Doctor, a sort of whistle-stop tour of the Big Finish range of plays. That’s not saying much though. It’s ultimately too low budget for its ambitions, involving lots of “look over there, it’s Bernice Summerfield, isn’t she cool? And over there, it’s alternative Doctor Who from the Unbound range!” and so on. So instead, it’s just a good excuse for Colin Baker to do silly voices and a chance for Nick Briggs to have another walk-on part.

On the whole then, an odd way to celebrate 100 audio plays and very much like a private party to which we’ve uneasily been sent an invitation.

Actual worth: £2.99 or you could barter a Pride Pup fashion skirt

My Own Private Wolfgang

What have you been watching? Including Spectre, Master of None, Flesh and Bone, and You’re The Worst