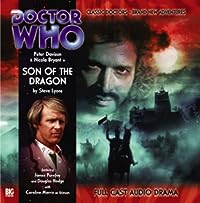 With the companion “Night of the Long Knives” just around the corner at Big Finish productions, I imagine there must have been some trepidation on Caroline Morris’ part when approaching this play.

The Big Finish companions are being wiped out in favour of their on-screen counterparts – and she gets to be the Bride of Dracula.

Not the vampire Dracula, mind, but Vlad the Impaler, that lovely East European warlord and “son of the dragon” from whom Bram Stoker got his original inspiration.

Never going to last, is it?

Plot (taken on a great big pole from the Big Finish web site)
I am Prince Vlad III – son of Vlad the Great, and sovereign and ruler of Ungro-Walachia and the duchies of Amlas and Fagaras.

But since my father’s murder, I have had another name.

Is it any good?
How much you enjoy this will depend on how much you like three things:

The problem I’ve always had with historicals is one that goes right back to the initial instructions laid down to Doctor Who: that it educate viewers about history. Lovely idea though that is, it does mean that 90% of each story ends up with “and in the year blah-di-blah, the Treaty of Ted was signed between Simon and Sharon. And after ten years, the brother died which resulted in a war of…”. And so on.

Son of the Dragon is no different in that respect and most of the dialogue for the first half of the play is the Doctor explaining the exciting differences between Bram Stoker’s Dracula and Vlad the Impaler. I say exciting; I mean deathly dull. Show, don’t tell, as they say.

Caroline Morris’ Erimen is her usual uninteresting self. Sorry, but she’s just a shouty pharoah who spends all her time shouting about having been a pharoah. Probably not her fault, since Erimen definitely can have her moments (cf Veil of the Leopard), but despite her implausible sudden love for the impaling one, there’s not much to her in this. Most of the plot is really just a build up to the possibility that she’s going to get the chop: does she? Doesn’t she? I’m not telling.

Purefoy’s largely unrecognisable in the role of Vlad the quite nasty, and he does an okay but hammy job with a reasonably interesting part. Peri gets some good, but un-Peri-ish moments, and Davison does his usual good job of being thrown from situation to situation and being stabbed, kicked, captured, etc.

On the whole though, too much history, too many comedy peasants, and too much Erimen to too little effect.

Actual worth: £5.99 or you could barter a silver letter opener engraved with a pair of antlers