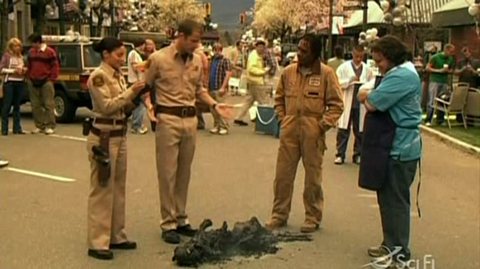 In the UK: Sky One at some point, cunningly retitled A Town Called Eureka

Eureka bored me. I saw the first few episodes and there was pretty much nothing remarkable about it. Tuning in for the first episode of this second season, it almost occurred to me that I had been wrong and the writers and producers had started to give this generic sci-fi show about a town of government scientists some depth and edge.

Whoops. My mistake. It’s just the same as it always was.

Apparently, the end of last season had some excitement because everyone had paired up, it was 2010 and the universe was falling apart. To save it, two of the regulars go back in time to the present day and try to wrong what once went right (then wrong).

For a moment then, that was the edge. Two people with knowledge of the future forced to go through all sorts of emotional pain as their future wives die/never decide to hook up with them. Genuine human emotion. Pain, something that distinguished the show from every other transient, well executed but ultimately shallow show that the SciFi channel has put out over the years.

Except, here comes the magic reset button! Woo hoo. Pain gone. Let’s go back to normal as though nothing had happened so we can have every episode a sci-fi plot we’ve already seen countless times before on other programmes.

So no proper characterisation, no girly emotions to talk about. Just sci-fi, all the time in a show that’s essentially just for sci-fi junkies who need a fix of something, anything so long as it’s sci-fi. Erk.

Amiable, but nothing special. Again.