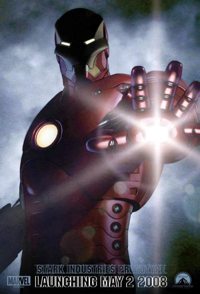 And lo, the rehabilitation of Robert Downey Jr did continue. It’s just been announced that everyone’s favourite former junkie and top-grade actor is to be Tony Stark in the new Iron Man movie, which is being directed by Jon Favreau. The project’s already had Tom Cruise’s name hanging from it, an idea that didn’t exactly endear itself to Iron Man fans, but Downey’s a pretty good choice, I reckon.

For those of you not in the know, Iron Man features a billionaire industrialist who fashions himself an iron weapons suit as a means to keep himself alive from a terminal heart condition and to escape a prison camp (I’m précising here: there was a weird amount of Vietnam-era propaganda in the origins story). In common with all comics these days, there are attempts to inject some depth into the character. So there’s a fair amount of angst by Stark over his weapons-manufacturing past and he later descends into alcoholism.

Who reckons Downey can do that?

The news for Friday 12th October

The news for Wednesday 31st October 2012