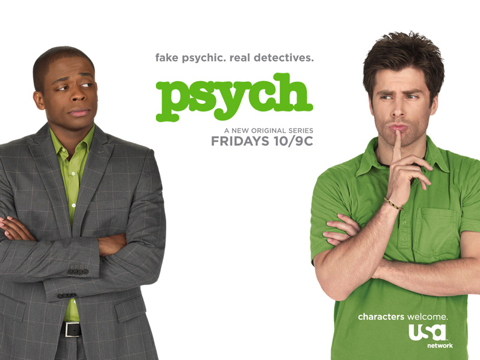 In the UK: Acquired by Hallmark and the BBC. Hallmark has the first-run rights, the Beeb second-run. No air date yet.

There’s something a little eerie about the USA Network’s new series Psych. I’m not talking about the fact the main character is a psychic with an uncanny gift for solving crimes. For one thing, Shawn Spencer (James Roday) isn’t a psychic. He was just raised by his cop father (Corbin Bernsen) from a very early age to be extremely observant. Every time they’d go into a diner, his father would make his shut his eyes and answer questions about things he’d seen (‘How many people are wearing hats?’ ‘What’s the manageress’s name? She greeted you on the way in and it was on her name tag’). Now Shawn just has to observe a crime scene and the behaviour of the suspects to know exactly what’s been happening.

No, the eerie thing is James Roday: he is a homeopathic Will Ferrell.

You know how homeopathy works right? The placebo effect, of course. Der!

Sorry, what I actually meant was how is it supposed to work? Well, you take a substance – for instance, Will Ferrell – and then you dilute it thousands of times. Yet magically you still have something with the properties of the original. And that’s what we have here with Roday. I swear that if it isn’t homeopathy or cloning or something, it’s got to be one of the miracles of the universe, because the two guys are pretty much identical.

Shawn Spencer (as played by Will Ferrell x 10-6 mol l-1) is very much a slacker. He’s had 57 jobs over the years, none lasting more than a few months. His Dad barely talks to him any more, he’s so disappointed in him. The one constant in his life is his best friend from childhood, the scientifically-inclined Gus (The West Wing‘s Dul?ɬ� Hill), who isn’t that impressed by him either.

But the cop streak is ingrained hard in Spencer. He can’t help but watch news reports, spot exactly whodunnit, then phone in a tip-off.

Unfortunately, the police get suspicious and begin to wonder if perhaps Spencer is part of a criminal gang. Given just a few seconds to come up with a convincing excuse for his inside knowledge, he says the first thing he can think of: he’s a psychic. When he goes on to tell everyone their innermost secrets, they begin to think he’s telling the truth.

Before he knows it, he’s been drafted to help with a kidnapping. Dragging Gus along for the ride, Spencer manages to break the case using his powers of observation and more than a little luck. Realising he’s got a great new job that he actually enjoys, he opens a detective agency which he chooses to call ‘psych’, with Gus as the co-owner. Gus points out that calling a psychic detective agency ‘psych’ is basically telling everyone that you’re lying. “But if you tell everyone you’re lying, everyone will think you’re actually telling the truth,’ reasons Spencer…

USA has somewhat of a track record of quirky cops. In fact, its tagline is now ‘Characters Welcome’. I presume they’re hoping that millions of viewers who see that tag line will think, “Gosh, if I wanted to watch an inoffensive show with idiosyncratic characters, I know now which network I’d watch.”

It started this trend inadvertently with Monk, the OCD detective. Touching Evil‘s David Creegan came next, but a brain-damaged, clinically depressed, divorced detective with no shame-control clearly was a little too quirky for the network, which didn’t know what to do with him – so cancelled him. Kojak went to the other extreme by not being quirky enough – being black and big doesn’t really count as a character trait. Now there’s Psych.

Problematically, USA’s quirky detectives are starting to feel a little too manufactured, with USA having woken up this potential unique selling point (USP) and now demanding quirkiness in all shows to fit in with its corporate branding. The emphasis is thus on the quirk, rather than the character himself.

But despite this forced eccentricity thrust upon anyone who gets a line in the script, Psych has an interesting idea at its heart. With even Numb3rs, the former last bastion of rationality, giving way to the “maybe there’s something in psychic powers after all. Look! It moved!” school of ‘thought’ last season, nothing could delight me more than a show that portrays every believer in psychic powers as a boob with the analytical capabilities of a raisin.

Yet the show is still just too forcibly quirky. It’s as though every character in the show has a huge sign on their head with “Look at this show! It’s so quirky! Look at me! Look at me! I’m quirky, too!” stencilled on it in big bold quirky letters. Will Ferrell x 10-6 mol l-1‘s performance didn’t help since he was just so laid back, he didn’t actually appear to be bothered enough even to occupy physical space most of the time: had anyone put a hand on him at the wrong moment, they would have passed straight through, which really would have got everyone believing in psychic powers. He remained likeable, even at his character’s worst moments of extreme laziness, however.

Dul?ɬ� Hill, after years of shameful under-use in The West Wing, finally gets his share of the limelight, but in a somewhat thankless role. Gus is the voice of rationality, morality and virtue – albeit mainly through cowardice, rather than through having a well-developed ethical code. He’s constantly reminding Spencer that one day, they’re going to get found out and what they’re doing is somewhat immoral. Yet he isn’t so goody-goody that the junior G-man inside him doesn’t want to tag along so he can have a play with all the CSI kit at crime scenes. It remains to be seen whether Hill will remain continuous second-fiddle black partner to the crazy white guy for the rest of the season, or whether he’ll be able to make the role into something more.

The plot was pretty throwaway and over-stretched, given the pilot’s hour-and-a-half runtime, but was really there just to serve as a framework to introduce the concept. The supporting cast was mostly fine, although the sceptical junior detectives clearly know they’re in a quirky comedy drama. Kirsten Nelson, who popped up with an amazing piece of mimicry as the young Mrs Landingham in The West Wing, stands out from the pack along with Corbin Bernsen, but seems to have wandered in from Fargo in her role as the pregnant interim chief of police (although mercifully she doesn’t try to do the accent).

On the whole, it’s a likeable show, has some promise, but seems a little too engineered to really endear itself. On the other hand, Variety reports that the premiere episode did get the highest ratings of any debut episode of a basic-cable drama in the US this year, so, as always, what do I know?

If you want to watch virtually the entire pilot, incidentally, someone has been both generous and insane enough to upload the entire thing to YouTube in six minute segments. Not the best way to watch it, but it’ll do, I guess. I’ll get you started with the first one below. See what you think.

Preview: Studio 60 on the Sunset Strip

In the US: Mondays, 10/9c, NBC. Starting September 18th. In the UK: Acquired by Channel 4, with possible More4 first screening. No date yet. For a lot of people, this has been the preview we’ve […]

My review of the second episode of the seventh season of CSI.
[…]