Normally, there’s nothing quite like the word ‘family’ (as in ‘a family show’) to inspire fear in the heart of any seasoned TV watcher. In general, ‘family’ equates to inoffensive, moralising, bland and unchallenging. When you have a whole network with ‘family’ in the title – as in ABC Family – you can pretty much write off its entire output as the visual equivalent of Saga magazine. Once in a while though, a programme comes along to buck the trend. Not much, but a little.

Kyle is a strange teenager. He wakes up naked in a wood one day with no memory of anything. And I mean anything: no language, no understanding of how to process sensory inputs, no idea of what a toilet is… He also appears at first to have little by way of emotion, regarding everything with the same neutral curious expression. One last thing: he also had no belly button.

In no time at all and faster than you can say “streaker”, he’s locked away in a juvenile detention facility where he gets entrusted into the care of a social worker experienced in the ways of ‘special’ children. She takes him home to meet the rest of her pleasing nuclear family who are generally freaked out by him.

They get even more freaked out when he manages to learn rudimentary English in a day and memorise machine representations of JPEG images with just a glance. A quick scan of his brain down the local hospital reveals its pretty much chugging along at 100% capacity, instead of the 9% we tend to use.

Soon Kyle is endearing himself to the other family members by clearing up their rooms, rescuing them from thuggish police with improvised aikido-esque martial arts and helping them repair computers. 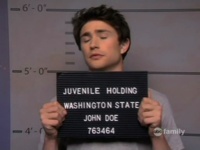 Kyle XY proves the belief of Kevin McLory and co that if you don’t do something right the first time, there’s no shame in trying again. In this case, the producers clearly believed that John Doe was a fine show, cancelled before its time, and it deserves a second chance.

The central driving interest of John Doe was the mystery of who he was. Kyle XY wisely continues with that plan and develops on it. While John Doe was clearly making it up as it went along, Kyle XY seems to have a strategy from the outset. ABC has built up an extensive web site for the series, which is replete with things like “Clue Trackers” and so on. The aim is for the audience to keep a very close eye out for clues during episodes: why does Kyle have no belly button? Is the XY of the title a reference to chromosomes and therefore of some genetic experiment? Is his constant talk of the “human species” in voice-over a suggestion he’s an alien or part of a new engineered species? Is his lack of strong emotion a suggestion that he’s an android? Who is the mysterious girl mentioned on television as having been washed ashore with no memories – Jane XX?

So far, it all seems moderately amiable and intriguing. Matt Dallas gives an intentionally wooden yet paradoxically charismatic performance as Kyle. If aliens, government conspiracies and robots can be avoided, the central mystery seems like a good one, although how long it can be strung out for remains to be seen. The supporting cast are all shiny attractive people and the guest cast is pretty much the same guest cast you’ll find in any US show shot in Canada (Stargate fans will spot both Teryl Rothery and Kevin Durand, among others). Moralising has so far been non-existent, except in the liberal “live and let live, let’s all love one another” way of life demonstrated by the nuclear family. There’s also promise in the next episode of a menacing threat for Kyle, which should prevent it slowly turning into autistic Touched by an Angel all the same.

At this stage, it could still all go pear-shaped, but I’ll be tuning in, just to see if it doesn’t. Shows like Kyle XY and Doctor Who that are aimed at families yet don’t totally suck need our support, after all, and are actually pretty fun to watch, even if you’re an adult.

If you’d like to watch more, there’s an alternative trailer available on YouTube: it’s just below and gives you most of the lowdown you’ll need.