One of the things I toyed with mentioning when reviewing The Cool Kids earlier today was the idea that maybe different generations appreciate different kinds of storytelling. Obviously, the kids with their phones and their YouTube like short-form (or do they?), whereas my generation love proper TV like they made in the 80s and the 90s before everything went to hell. Obviously. But is my normal just as much an acquired taste and were the dramas of the 60s and 70s ‘optimum TV’ and are people in their 50s and 60s the true connoisseurs, who are currently underserved?

It would explain why I didn’t think there were any jokes in The Cool Kids – there were, but I didn’t really appreciate them, whereas someone older might have done.

Nah. The Cool Kids was dreadful. I bet even old people hate it.

Anyway, that was my thought. Which handily enough ties into Netflix’s The Good Cop. Netflix, of course, is truly global in all senses, and tries to cater for all generations and all tastes around the world. And despite the fact them kids watch a lot more streaming services than the older generations do, that doesn’t mean oldsters can’t watch them, too, particularly if there’s TV actually aimed at them. We’ve had older female-oriented TV on Netflix already with Grace and Frankie, but now here’s one for the boys.

Loosely based on Yes (Israel)’s השוטר הטוב‎ (The Good Cop), it sees singer and TV host Josh Groban playing a by-the-book NYPD lieutenant. Which is odd, because his dad (Who’s the Boss?‘s Tony Danza) used to be a cop, but was sent away for a long stretch in prison for being corrupt. Not just taking a bribe or two corrupt, but organising heists corrupt.

Anyway, dad’s finally out of prison and with nowhere else to stay, he moves in with his son, who’s got him a nice parole officer in the form of his co-worker, Monica Barbaro (UnREAL). Dad’s not so keen about sticking to the straight and narrow, but Groban’s going to do all he can to keep him on track. The only problem is that crime has a tendency to find itself on their mutual doorstep, with both providing different approaches to solving cases.

The first three episodes of the series are somewhat varied in nature, but all are tonally what you’d call genteel and are actually quite good whodunnit/howdunnits in the style of Agatha Christie, rather than traditional US crime drama. The clues are more or less all there – you just have to put them together to solve the crime.

The first episode has one of Danza’s arch enemies being found dead, killed using Groban’s gun. The only two with access to it are Groban and Danza yet each swears he didn’t do it. So who did kill him and how?

The second episode is perhaps the best of the three and benefits from guest star Emma Ishta (Stitchers) playing a famous supermodel. Surprisingly, she seems to have a thing for Danza and wants to hang out and do crazy things with him all the time. Does she really have the hots for an old coot, or does she have an alternative agenda? If so, what is it? Ishta certainly makes it fun and funny, even if the ending does make you feel a bit sorry for Danza.

The third episode sees an old friend from prison John Carroll Lynch (Fargo) make a break for freedom. Except he appears to run into a nice couple and kill the wife. Danza doesn’t believe he’s capable of the crime, so puts him up in the basement, disguised as “an ugly German woman”, which leads to some surprisingly good German being spoken by Lynch… in drag (but not always good – Mein Mutter? Really? Although given the situation, I guess, maybe. Is that a bit too subtle, though?) 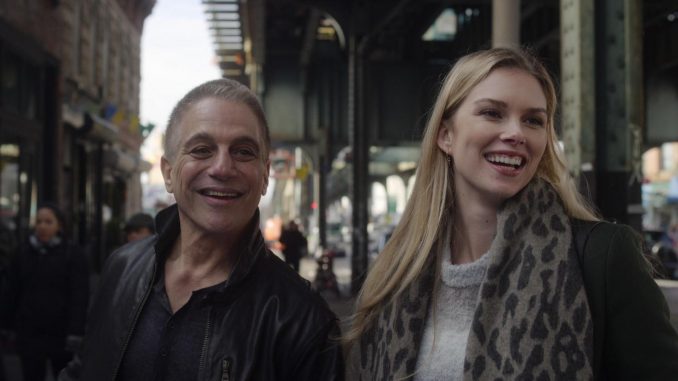 None of this is hilarious. Mostly, it’s titter-worthy, but it’s more bittersweet than uproarious. There are scenes of mild peril, but nothing that could be considered a thrill. Instead, it’s half-hour episodes of mildly diverting, relatively thoughtful, character-based drama. If you’ve seen The Brokenwood Mysteries, you know the pace and tone.

Groban and Danza’s relationship is testy but never acrimonious; Groban’s never quite the stereotype of the nerd, but is a genuinely effective cop who is effective because he plays by the rules, is smart and observant. Danza, meanwhile, is a much darker character than you’d think, far less a guy with a twinkle in his eye than a cop with a shiv behind his back.

Occasionally, it hits the mark, too: The Wire‘s Isaiah Washington plays a cop who can’t really be bothered as he only has a year until retirement, so naps on the job and does the barest necessary. But there’s a funeral scene in which he’s asked to say what he’s thinking and he reveals his deepest thoughts that is genuinely funny. Equally, there is a shootout in the first episode that actually dared to do something I’d not seen before.

But is a must-watch? Not be a long chalk. If you’re at home, looking for something that features an older cast, might make you laugh a bit, poses the occasional brain-teaser and that takes its time (but not too much), it’ll do the trick. Otherwise, in a somewhat cramped peak TV schedule, it’ll likely lose out to far more exciting shows.