In the US: Wednesdays, 10pm ET/PT, Audience
In the UK: Not yet acquired

In this day and age, it’s actually quite rare for a movie adaptation to stick relatively faithfully to the original. Condor, based on 70s ‘classic’ spy movie Three Days of the Condor, is one such beast that so far has followed the original’s plot pretty closely. Effectively a mash-up of the original movie, Rubicon and 24, it sees Max Irons playing a nerdy CIA analyst forced to go on the run when he stumbles on something he shouldn’t have and his entire office of co-workers gets killed.

Episode one wasn’t great, but it wasn’t bad and was probably better than the original Robert Redford movie. It was a bit off-kilter, not following the standard beats of spy shows, instead giving us something a bit more thoughtful than average while simultaneously a bit more stupid, as goodies and secret baddies debate the nature of morality in a world of amoral terrorism – should we continue to play by the rules or should we be taking the gloves off and trying to wipe out everyone without restraint? Weirdly, Brendan “George, George, George of the Jungle” Fraser is the bad guy, but he goes around not quite knowing how to be an evil villain. He hopes to wipe out the US/the Middle East/both (one of those is a spoiler) with some engineered bubonic plague, but he doesn’t actually like killing, he’s a bad manager and everyone but everyone pushes him around. Interestingly for a conspiracy theory show, we know from the beginning who the conspirators are, too.

Subsequent episodes have then been somewhat varied in theme, if not quality. Episode two was a far more exciting and less stupid affair than the first episode, with Mr Irons having to deal with implacable Terminator-like adversaries and generally not faring too well. However, my fears that all the good cast (eg William Hurt) were going to get killed off or written out in the second episode in favour of cheaper actors appear to be unsupported, fortunately, with episode three showing that at the very least, we might get two minutes of both Hurt and Mira Sorvino insulting each other’s balls every week, if not much more.

Episode three was the first episode to really exploit the potential of TV by making it not all about Max Irons. He’s in it, but here the focus is as much on the relatives of the deceased co-workers and their pain, as it is on Irons’ problems. One scene in particular, in which a CIA goodie (Bob Balaban) actually sits down and prays for someone after meeting them isn’t something I think I’ve ever seen in a thriller, showing Condor has the potential to be innovative.

Unfortunately, when Irons is around, the remnants of Three Days of the Condor work against him – it’s really not cool to go around abducting ex-dates and beating them up in their own homes in the #MeToo era and you can’t help but think that maybe the producers would have been justified in changing the original’s plot to bring it up to date (if The Bourne Identity could go do it, I don’t see why Condor couldn’t).

Condor is a pretty decent, if still chewing-gum infused piece of spying. It could do with losing some more clichés and the big hitting actors need to be allowed to do more than needle each other in offices, but it’s really a lot better than I was expecting and something I’ll be sticking with for the foreseeable future. 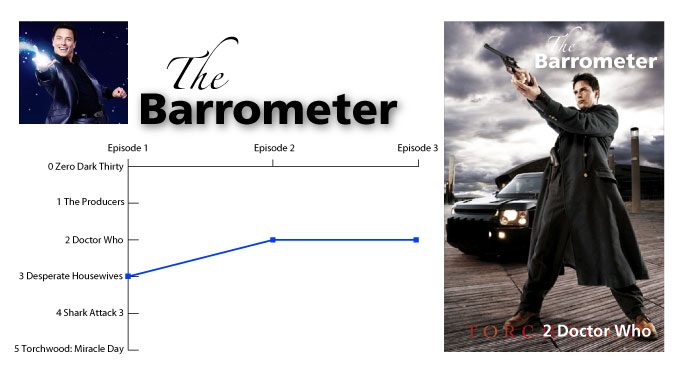 Other TV news from last week

News from over the weekend