German TV is on something of a roll at the moment, thanks to the likes of Deutschland 83 and Babylon Berlin. With Amazon also already having aired its first German-language original, You Are Wanted, it’s no surprise that Netflix would want to get in on the act, too; it’s also unsurprising that being Netflix, Dark is substantially better than Amazon’s efforts.

What is surprising is that whether deliberately or not, Dark is probably the most German TV show imaginable.

Set in the small rural town of Winden (none of the real ones) in 2019, it opens with the suicide of a respected and loved father, who leaves a letter that must not be opened until a few months after his death.

Not that this is the first tragedy to strike the town. A child has already gone missing that year and just a few days short of the date on the letter, a third child disappears and a mutilated body is soon found. Except it’s a child who disappeared in 1986 and it’s as if not a day has passed for him. What’s going on?

So far, so not especially German, for sure, but by the end of the first season, this Groundhog Day meets Back to the Future 2 meets Saw has gone through a gamut of German concerns and interests, from myth and the power of the woods and nature, through atomic energy and acid rain, to Nietzsche’s nihilism and Goethe’s fatalism, all with just a hint of 80s nostalgia (not Ostalgie, though). It also tries to address that perennial German-related time travel morality question: if you could travel back in time to kill Hitler when he was just a child, would you? And if you did, would it change anything or would Time somehow still conspire to find a way for history to continue on the same course?

Yes, Dark is indeed dark. So, are you going to like it? Well, that’s another matter. A full review of the entire first season after this lovely trailer – some minor spoilers ahoy.

First up, if you haven’t watched it already, I’d recommend not watching the dubbed version – instead, watch the subtitled version, assuming you can get Netflix’s various apps to do that and remember your choice because the iOS one kept forgetting for me.

I’m advising this not because the dubbing’s bad – although thanks to its choice of US voice actors, it’s closer to 70s Eastern martial arts movies than to the 70s/80s dub of Heidi – but because the dub track messes up the sound mix, making it sound far less claustrophobic and scary than it actually is.

Because this is a very claustrophobic show. When it’s not in the wide, expansive, rain-sodden German woods, offering you existential agoraphobic angst, it’s down in the caves in dark and narrow passages or in old nuclear bunkers. However, its biggest form of claustrophobia stems from the idea that none of our actions are free, that whatever we do is predestined and nothing we can do can change them. Even if you have the power to travel through time, any changes you make will end up being the original cause of the thing you didn’t want to happen in the first place. You’re trapped by time itself.

On top of that, it’s also a show about suicide and child murders. There’s nothing sexual about what happens, but this is a show where children’s bodies turn up with their eyes burnt out and (spoiler)(spoiler alert) one child is nearly bludgeoned to death with a rock by an ostensible hero. This is close to the bone stuff, sometimes literally.

The show is largely set in three different times: 2019, 1986 and 1953. Characters in any time can travel to other times, either forwards or backwards. Most don’t, though, so live conventional lives; meanwhile, others that do travel can choose stay and continue living in a new time zone, or simply get stuck without a way back.

The upside of this is you get one of the most complicated, clever and philosophical examinations of the nature of fate, causality and the interdependence of all things.

The downside of this is that in some cases you’ll have the same character played by three different actors of different ages, making Dark‘s biggest challenge to its viewers trying to remember everyone’s names and who’s who. It doesn’t help that in some cases (spoiler) (spoiler alert) some people end up going back in time and having children, resulting in some very convoluted family trees; similarly, there are several characters whose identities are deliberately kept secret. Nevertheless, while the producers and directors do try their best to help everyone remember who’s who, including using split-screen, wallcharts and more, I spent a certain amount of time each episode trying to remember exactly who was who, how they were related and whether I’d forgotten something important about them.

The unrelenting darkness of the show means that apart from the occasional joking reference to the 80s, including Back to the Future‘s Delorean, Dark‘s a hard watch. None of the characters are appealing, everyone’s having affairs, breaking everyone else’s hearts or making false rape charges. Not even the leads (bereaved son Louis Hofmann and bereaved father Oliver Masucci) are fun to spend any time with, and if you thought You Are Wanted‘s Matthias Schweighöfer was a bit shouty, wait till you get to Winden, because the whole town’s like him, men and women, girls and boys alike.

Half the characters are bonkers, too. There’s an old woman who goes around with sniper rifles and grenades, while there’s an ageless vicar called Noah fighting a time war against an unnamed darkness. People go back in time to try to kill their younger selves before they make mistakes.

Sure, it’s raining all the time, they live near a nuclear power plant, birds keeping falling dead from the skies and children keep disappearing or winding up dead, but even when they’re playing video games, no one’s having any fun.

The first half of the season is largely an introduction to the characters and a slow dripping away of information about what might be happening in the show; the second half is then explanation and a slow building of mythos in preparation for the already commissioned second season, for which copious mysteries remain to be explained. Again, this makes Dark a hard watch, as there’s very little to encourage the casual viewer to keep watching. You have to be dedicated with this one.

But when it does find its mojo, Dark is a marvellously imaginative and cerebral take on time travel. Its time travel box is almost as iconic as Hellraiser‘s Lament Configuration Box. Its philosophical musings on fate and whether the future can be the cause of the past as well as vice versa go far deeper than most TV depictions of time travel, too – if time travel can’t change the past yet can still be the cause of past actions, following some pre-determined form of fate, who is responsible for that preset path: God, Man, the universe itself or just random chance?

Its mojo is also largely to be found back in the 1980s and 1950s, which is where it gets to be nostalgic for times past. I imagine there’ll be greater chuckles and pangs in Germany than elsewhere for the “Atomkraft? Nein Danke” T-shirts, the music, Pfennigs, West German passports, and the long-gone chocolate bars and cars that the show conjures Deutschland 83-style; but it’s still plenty of fun for everyone else, too.

More importantly, though, even if the characters aren’t particularly likeable, Dark serves perhaps even better than Back to the Future did as a demonstration of how parents (and grandparents) were all kids once, making their own mistakes, some the same, some different. An innocent young boy may become a guilty middle-aged man who becomes a demented but shamed old man. A sad nerdish girl might grow up to become the powerful manager of a nuclear power station. But they are all the sum of their experiences and if you change those experiences, you change them and perhaps yourself and others, too, for better or worse. 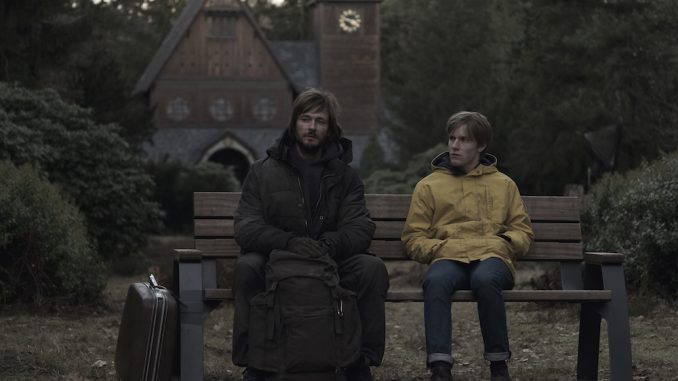 Dark doesn’t clear up all its mysteries. Even though it does (in a way) eventually explain the source of its time travel, there are still plenty of questions left by the end of the season that it will need a second to answer sufficiently to be truly satisfying, both for the characters and the plot. Unfortunately, its conclusion gives us a glimpse at the (spoiler) (spoiler alert) Mad Max-esque 2052 that doesn’t bode well for the future.

Nevertheless, Dark is a beautiful-looking, smart piece of occasionally horrifying science-fiction with few TV antecedents that’s worth your time. But you’ll have to really work at it to get the most out of it.

What have you been watching? Including Les témoins (Witnesses), There’s… Johnny! and Babylon Berlin

It’s “What have you been watching?”, your chance to recommend anything you’ve been watching this week With Thanksgiving largely knocking the US schedules for six last week, I’ve had the chance to play a bit […]

When’s that show you mentioned starting, TMINE? Including Valor, Babylon Berlin and The Sinner

Every Friday, TMINE lets you know the latest announcements about when new imported TV shows will finally be arriving on UK screens – assuming anyone’s bought anything, of course So I missed a premiere date. Sorry about […]