The Twilight Zone is one of the most famous shows in US TV history. Although not quite the original US ‘anthology show’ – indeed, it started off as an episode of precursor CBS anthology show The Desilu Playhouse – it is the best known.

A science-fiction, fantasy, psychological-supernatural horror anthology show created by Rod Serling, it ran for five seasons from 1959 to 1964. Each standalone episode depicted characters dealing with paranormal, futuristic, Kafka-esque, or otherwise disturbing or unusual events that are said to have taken place in ‘The Twilight Zone’.

Famously, of course, each story typically featured a moral or surprise ending. I say famously, but there are few people who could probably tell you even one of those endings without prompting, since it’s one of those shows that’s famous without many people actually having seen any episodes of it – or of its numerous remakes, of which a new one is being developed even as I type.

At a push, people might remember its later theme tune and title sequence:

They’ll have forgotten the original one completely, mind.

But individual episodes? Not so much.

For the most part, The Twilight Zone has entered the realm of the meme – a shorthand for the weird and unexplainable, and stories with weird aliens and stings in their tails. Although, to be honest, that’s more The Outer Limits people are thinking of. Indeed, you can reduce the ‘stings’ of all 156 episodes down to just 10 minutes if you try really hard.

Adapting The Twilight Zone for the stage

Which makes adapting it for the stage, as The Almeida Theatre in North London has done, potentially both easy and hard. Easy, because if no one can remember the episodes, no one’s going to be fussed if you either simply stage one as written or divert from it and change it in some way; hard, because you’ve little to latch onto.

Indeed, the question is what you’re actually going to adapt. Director Tom Brennan explains some of the technical issues:

So the TV show was like a kind of theatre, and in turn the theatre show is based on TV. It’s a strange transference of forms. There are certainly many questions that arise when thinking about the legacy of the show and its new manifestation on stage.

But at a more basic level, even if you think of each episode as a play, it’s still a play that’s only 50 minutes long and that relies on filmic rather than theatrical techniques for the most part. And which can be pastiched as a mere twist.

John Landis and others showed us one way of doing it back in 1983 with The Twilight Zone: The Movie. That simply took three classic episodes of the show, added in a new one, and then created ‘bookend’ scenes around them.

What does writer Anne Washburn do at The Almeida? Well, let’s just say not only is a bit different to that, it’s also a bit more North London. 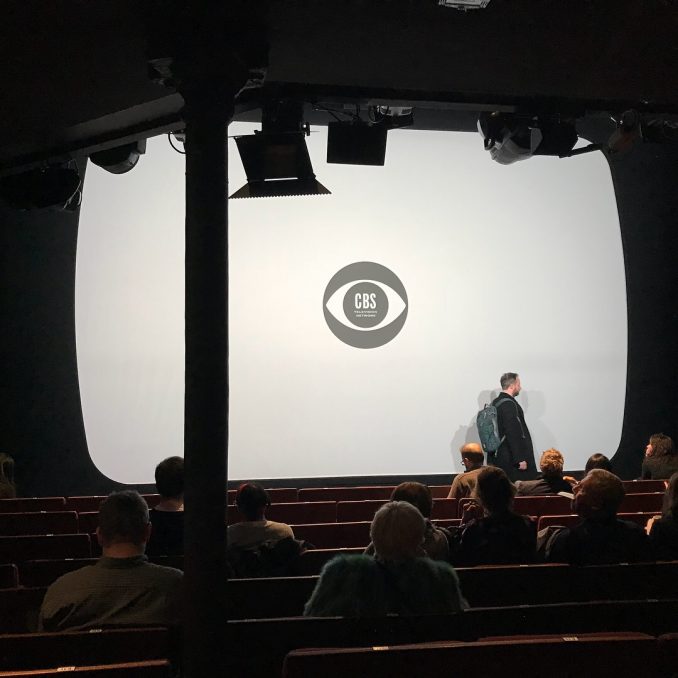 The Twilight Zone is a play of both two acts and two halves. The first act is almost like channel-hopping between five different episodes of the original series, which for the aficionados are:

The show opens with Will The Real Martian Please Stand Up? and it’s this that provides the main lead-in to the play. After that, we swap between episodes. Unlike the original series, though, elements from one episode seep into another. Sometimes we just hear dialogue played from one episode on top of another; sometimes we see action from an episode out of order; sometimes a character from one episode will wander into another episode, with the diner and characters from Will The Real Martian Please Stand Up? appearing in several other scenes as well.

In the case of Eye of the Beholder, the episode is reduced almost completely to individual dialogue-less vignettes, with a character with a bandaged head walking on, walking off and sometimes walking through the Twilight Zone door, which is omnipresent throughout scene changes – of which there are many, with the cast/stage hands whirling umbrellas with elements of the more famous title sequence to distract as furniture is moved around.

None of which is especially satisfying. Just as soon as you get into an episode, it’s off to another one. More importantly, it’s clear from the outside that the show is a little bit embarrassed it’s doing science-fiction, so doesn’t take it entirely seriously.

Sure, The Twilight Zone was often far lighter than memes would suggest (again, you’re thinking of the marvellously dark The Outer Limits), but the laughter usually feels directed at the show rather than with it. There’s also a deeply misguided musical number in Perchance to Dream that will have you giggling rather than anything else.

While the five episodes aren’t all resolved in the first half, simple maths tells you that you’re not getting the full story of each episode, just the edited highlights. Little Girl Lost? Drag her through a hole. And When The Sky Was Opened? Disappearing blokes. Nightmare as a Child? Talking to yourself. For the most part, it’s again The Twilight Zone as meme, the plot set-up and twist without the character development and humanity that made it what it was.

Sometimes, it’s even unclear what the point of the episode choices is, since the twist doesn’t go all the way or is changed and Serling’s concluding narrative is omitted. Blokes keep disappearing in And When The Sky Was Opened but their plane never does and we’re hopping around so much that we never get to fear the loss of identity and memory that the episode itself elicits. Little Lost Girl sees a little girl lost in another dimension… and then found. Well done, lads, but what was the point of that exactly?

Instead, it’s all a bit of a ‘Greatest Hits’ collection, occasionally with a nod to those who might know about the original show. We get a fleeting guest appearance by the alien from To Serve Mankind, although it’s largely comedic (“Don’t mind me – I’m just here to help”) while Caesar the dummy from Caesar and Me appears as ‘Napoleon’ and… is a ventriloquist’s dummy for the most part.

The second act is a significantly better affair, however, simply by virtue of dwelling on fewer episodes and allowing them to play out. Largely a combination of The Long Morrow and The Shelter, the former is a poignant love story in which the lovers are allowed to develop a relationship, while the latter is a timeless attack on bigotry and racism as neighbours vie for a place in a bomb shelter, claiming to be better and more American than their friends. It’s a searing piece of insight by Serling that was as accurate in the original episode as it is now – not that most theatre reviewers appear to have realised it was a piece of TV writing nearly 60 years old, rather than something novel created by the Almeida.

All then gets rounded off by an original piece by Washburn that Twilight Zones The Twilight Zone itself and even involves an appearance by ‘Rod Serling’, who until now has been a sort of meme himself – various members of the cast having ‘become’ Serling through frequently deft sleight-of-hand production of cigarettes and the delivery of a Serling-esque monologue to the audience that again is often done for laughs.

However, it’s this piece – which also involves the audience – that really clarifies the production’s big flaw: the idea that TV and science fiction are inherently lesser and need to justify themselves, something that ‘Serling’ has to do through a monologue that explains what everyone’s seen and the virtue of imagination, rather than allow the episodes to stand on their own two feet and be taken seriously by both the audience and the play’s creators.

The Twilight Zone is impressively staged and well-acted. It features some classic episodes of the original show that highlight its range, without being inaccessible to a neophyte audience or offering too many in-jokes.

But it misses the point of The Twilight Zone, reducing it to meme and twist in the tail, rather than using it truly to explore the human condition. It’s also too ambitious in its aims while being simultaneously ashamed that it’s adapting an old US science-fiction show, rushing to avoid dwelling on anything too long, so preventing any real development of the themes it raises.

The news for Thursday 20th December 2012

What have you been watching? Including Dead to Me

Reviews of the latest episodes of Doom Patrol, Game of Thrones, The Twilight Zone, Warrior and What We Do In the Shadows, as well as the first episode of Dead to Me […]

All 156 episodes of The Twilight Zone in 10 minutes