Dennis Haysbert: you know him right? He’s been around for ages. I first saw him in Suture, in which he played the absolutely identical twin brother of a white guy – a white guy who didn’t have an eye-patch like him. But he was also the getaway driver in Heat, was the government guy in Now and Again, and is best known as ex-President Palmer in 24 – Palmer being the only man in the world Jack “Harder than Chuck Norris” Bauer respects. He’s a cool guy, basically. But how cool?

I’ll tell you how cool he is. He now has his own show, one specially written for him by David Mamet.

Yes. David Mamet, the manliest of modern American playwrights. If David Mamet had one tenth the testosterone level of his scripts combined, he’d be able to knock out a charging bull with his bare hands. He’s that manly.

But The Unit, as Haysbert’s new show is called, is even manlier than David Mamet channelling the spirit of Ernest Hemingway in a Living TV seance. For starters, it’s based on Inside Delta Force, a book written by the founder of America’s answer to the SAS, Eric Haney. For no doubt a whole host of legal reasons, The Unit isn’t actually about Delta Force, but a thinly veiled version of Delta Force that goes undercover in Afghanistan one day and then on their day off foil hijackings of commercial jets. If ‘The Unit’ could talk, it would have to kill you afterwards.

The show is both good and awful. When dealing with the aforementioned hijacking, it’s very tense and impressive. Blink too many times and the spell that makes you think Scott Foley (Elliott’s ex-boyfriend in Scrubs) is capable of speaking Arabic and knifing people in the throat will wear off, but as tales of daring-do go it’s a lot closer to reality, I suspect, that the fabulous wonderland that is 24. It certainly makes Ross Kemp and Ultimate Force look like a bunch of Nancies.

It also manages to deal with the personal lives of the soldiers in a reasonably uninsulting way, while simultaneously recycling every cliché in the book. We get to meet all the Unit’s wives, who are a mix of the long-suffering, the cheating and the Independent Woman Who Wants Her Husband To Be More Emotionally Involved In the Family And Won’t Be Treated As A Second-Class Citizen By The Army. You know the type.

But there’s simply so much manliness going around, there’s a surplus that can be ladelled out to the wives as well. You could talk about The Unit if you wanted to, but then one of the wives would have to kill you.

Where it falls down quite drastically is when dealing with non-US affairs. Have a look at this picture of Haysbert and one of his comrades undercover in Afghanistan: 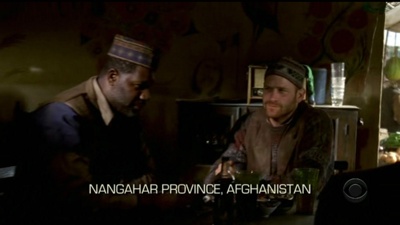 Now if you were Afghanistani and you saw these guys in your local pub, would you, even for one second, think they weren’t Americans? No, neither would I. It’s not a fatal flaw – show me one TV series that properly manages to pull off International (don’t even think of saying Alias) – but it’s still more laughable than The West Wing‘s attempts (although not as insulting as Commander in Chief‘s).

If The Unit can confine itself to domestic US operations and maintain the same level of quality as Mamet’s opening episode, it’s going to be worth watching. However, I foresee a certain amount of jingoism in the near future that it’ll find hard to avoid. I’ll keep my fingers crossed for it.

But there’ll be one thing The Unit proves: you shouldn’t mess with Haysbert.

News from the weekend