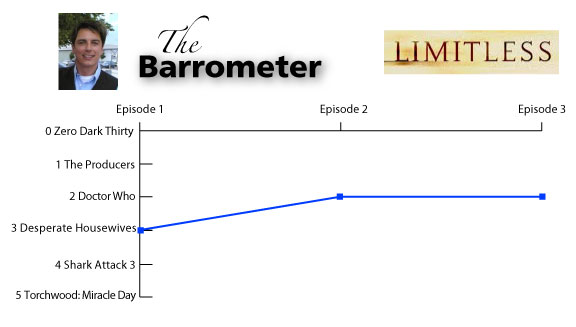 In contrast to all the other shows that decided with their second episodes to improve on their crappy pilots this season, Limitless appears to have been planned this way all along. Which is odd. The first episode was generic dullness – a continuation that bolted a police procedural format onto the superior Bradley Cooper movie about a slacker who takes a drug that gives him incredible mental capabilities but which has lethal withdrawal symptoms.

As I mentioned at the time, it was inherently not much different from any number of other CBS “clever people solve crimes” shows, such as The Mentalist, Numb3rs, Elementary, Criminal Minds, Intelligence, Scorpion, and CSI, beyond a little more spit and polish, presumably acquired through experience of making so many identikit shows.

The oddest feature of the first episode was its messed up casting, with livewire Jennifer Carpenter from Dexter cast as the dull FBI agent who plays second fiddle to twentysomething musician-slacker Jake McDorman from Manhattan Love Story. What were the producers thinking, I wondered?

Well, it’s quite clear what they were thinking now, since apparently, the pilot was intended to lure in the fans of the movie. But as of episode two, the series officially became a comedy with occasionally dark undertones. It became Chuck. A better Chuck than Chuck in fact, since at least it can manage to do action and Carpenter doesn’t have to look like a lovesick puppy the whole time (poor Yvonne Strahovski).

And as a comedy, it’s actually quite fun, warm, engaging and inventive – considerably better and nicer, in fact, than just about anything CBS classes as a comedy. Best touch of the show so far, beyond some wildly inventive fantasy sequences, has been the recruitment in the third episode of McDorman’s fellow lead from Manhattan Love Story, Analeigh Tipton, as his ex-girlfriend, newly impressed by the NZT-improved McDorman.

What it isn’t any more is either a good police procedural, since its plots wander between dull and unrealistic, or a continuation of the movie Limitless, beyond constant acknowledgements of the existence of Bradley Cooper’s character and the NZT MacGuffin. Tonally, it’s off completely here: Cooper has evolved into something a tad evil, and NZT does little except make McDorman a bit more energetic, focused and smarter. There’s little of the OCD, drive and mastery of the world that the movie’s NZT brought to Cooper.

Indeed, McDorman is well cast as the driftless and not-that-smart-even-on-NZT lead, well suited to the idea of an amiable shmuck who can drag up inspiration from old episodes of Miami Vice and dream-sequence all manner of hard-boiled shenanigans and adventures for Carpenter, since he isn’t allowed to go on missions with her, only stay in the back room analysing things on his regulation one pill a day.

I still think Carpenter would have been a better lead, and it would have been interesting for a change to have a show about a female slacker turning her life around, and not through setting up a cupcake business. The vestigial dark through-narrative about Cooper blackmailing McDorman also sits oddly next to the rest of the almost exclusively comedic and heartwarming qualities of the show.

But as it stands, Limitless is now a considerably more interesting, albeit different show than when it started.

Barrometer rating: 2
TMINE’s prediction: I’m not on NZT, but I think this has the potential to run and run. However, I’m not convinced it quite has that magical ingredient needed to make an audience love it.