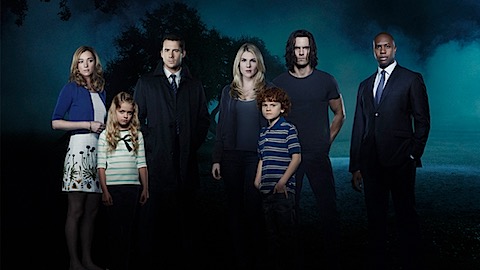 Kids are little bastards, aren’t they? Playing games all the time with their invisible friends, always trying to kill you. I mean who’d have ‘em in the house?

Not most people, by the time they’ve finished watching The Whispers, or at least they might think twice about it. The idea behind ABC’s new supernatural chiller is that something, perhaps a ghost, perhaps an alien, has come to Earth and is trying to kill off various people by persuading their kids to play various games, which typically involve things like weakening floorboards so that their parents fall through them to their doom.

What is it, who does it want to kill and why? All good questions, and ones to which FBI child specialist Lily Rabe (American Horror Story) wants to find the answers, as for various reasons that later become clear, it seems linked to her ex-boyfriend, her MIA husband, a military jet that was flying in the Arctic but has crashed in Africa in the branches of a stone tree, a mysterious hirsute amnesiac vagrant (Milo Ventimiglia from Heroes) who speaks in Arabic when he’s unconscious and is covered in tattoos, the scientist who finds the jet, a politician (David Andrews (Pulaski, Crisis), the president and, of course, the parents themselves.

And because of the interconnected nature of the plot, some or even all these people might be the same person.

If some of this sounds suspiciously familiar, it might be because it’s partly based on Ray Bradbury’s The Illustrated Man (in particular, Zero Hour), and although it’s not the best TV programme ever made, it’s a damn sight scarier and more interesting than the average ABC summertime special.

About
We love to play games with our children. But what happens when someone else starts to play with them too? Someone we don’t know. Can’t see. Can’t hear. In The Whispers, someone or something — is manipulating the ones we love most to accomplish the unthinkable. The Whispers is produced by Steven Spielberg, Justin Falvey, Darryl Frank, Zack Estrin, and Dawn Parouse Olmstead. The pilot was written and co-executive produced by Soo Hugh.

In the country’s center of political power, Washington D.C., several kids have been talking about their imaginary friend. What the parents don’t know is this friend is not as imaginary as they assume. And when the mysterious games they play turn dangerous, FBI child specialist Claire Bennigan is called in to investigate. Is this just a case of children being led down the wrong path? Or is it something far more unsettling… as she searches for the answer.

Halfway across the world, in the middle of the Sahara Desert, Defense Department operative Wes Lawrence unearths a strange, haunting geological phenomenon. Are these mysteries connected? The answer will force them all to face their greatest fear. That perhaps the enemy… is already in their homes. As the clock counts down, it’s a suspenseful race to save not only their families, but the world. Before it’s too late.

The Whispers is produced by ABC Studios, with Amblin TV as co-producer.

Is it any good?
As alien invasions go, this about as well made as any other Amblin TV invasion – ie not very. But that Bradbury backbone and that Heroes interconnectedness does actually make it all a lot more intriguing than it might have been.

The pilot takes a little time to get going as we watch Autumn Reeser (Valentine, No Ordinary Family, The Last Resort) and for the dull and wimpy Rabe to get her game on, as she copes with her camp sceptical partner (Derek Webster) and then a flotilla of children who can’t act. It’s all very sub-PG 13 horror, with people standing on street corners looking as menacing as they can in broad daylight and everything is just a little too pedestrianly directed to actually frighten much, beyond the intrinsic idea of the malevolent, invisible Chockys manipulating innocent kids into murder.

However, once we start entering Close Encounters of the Third Kind territory, rather than Falling Skies, things get a whole lot better as we see the much better directed, creepier aspects of the Sahara side of things, and as Ventimiglia starts to get some lines and breaks into a run every so often.

The show has lots of problems: the cast, particularly the children, is almost uniformly bad, although to be fair, they’ve been saddled with some pretty terrible dialogue to work their way through. Labe is a terrible lead and the attempts to make her seem hardcore fall flat on their face like a toddler on its first walk; but she’s still not the worst cast member. In terms of scares, we’re also talking War of the Worlds rather than Poitergeist on the Spielberg scale, and although the show is essentially about horror being found in the ordinary, the ordinary is practically soporific in its prosaicness.

But the ideas behind the show are what make this worth watching – at least for now. We have mysterious tattoos, invisible aliens, stone trees, Bermuda Triangles in the desert, interconnectedness of lives, possible possession and a whole lot more. All of this Bradbury-ness make Whispers worth sticking with.

The Heroes Dilemma: a request for help

A request for help in getting my wife to watch Heroes.

The news for Wednesday 19th December 2007