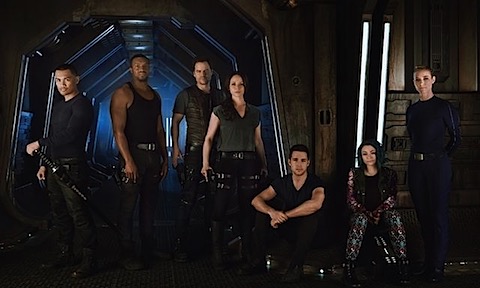 They say there are no original ideas any more and that everything has already been done before – it’s just a question of how you take elements of what’s gone before to create a new mixture.

If this statement is true, it’s doubly true of science-fiction, where for any given show, it’s almost certainly possible to name a very similar if not identical predecessor. A case in point is the new Canadian-US co-production Dark Matter.

Adapted from their own comic by the brains behind the TV version of Stargate, Joseph Mallozzi and Paul Mullie, the show is roughly 90% Blakes 7 for starters – a group of six misfits, four men, two women, wind up on board an advanced spaceship. There they meet the seventh member of the crew, the ship’s artificial intelligence, and come together to fight oppression from a huge federation.

The remaining 10% of the show is pure Andromeda, with the ship’s artificial intelligence having a robotic avatar and the crew having turned good relatively recently, originally being a bunch of criminals until they had their memories taken away. And then there’s the slightly enigmatic woman with funny coloured hair who’s on board the ship but wasn’t one of the criminals and who has strange powers.

So far, so derivative. There’s even a little sprinkling of Firefly on top. The question is – does Dark Matter stick all these components together to create something decent?

The short answer is: not really, but at least it’s fun.

About
The crew of a derelict spaceship is awakened from stasis with no memories of who they are or how they got on board. Facing threats at every turn, they have to work together to survive a voyage charged with vengeance, betrayal and hidden secrets.

Is it any good?
The show’s about as predictable as they come, but it’s never egregiously bad and it has a few fun moments.

Even once they start to get their memories back, the ship’s roster is pretty standard, dull and even a bit stereotypical. We have 24/Continuum’s Roger Cross forced back into the tough black guy role after managing to spread his wings a bit on Motive and The Returned. He heartily approves of the cool name for the ship’s shuttlecraft, Marauder. We have a nearly silent, cryptic Asian guy who’s good at martial arts (Alex Mallari Jr). There’s the tough female leader (Melissa O’Neil), who’s also sexy and likes to show a bit of navel, much to the appreciation of the men. There’s a Southern guy who doesn’t like to play by the rules (Anthony Lemke). And it’s the geeky girl (Jodelle Ferland) who’s good at electronics and mechanics (cf Scorpion, NCIS), of course. Then there’s The Android (she’s a gynoid) in the silvery catsuit (Zoie Palmer).

To its credit, the show does play a little with these stereotypes and adds the occasional nuance. Cross may be a big growly guy, but actually, he’s the brains of the operation; the waif-like Ferland may be a bit geeky and hides when there’s action, but she might potentially have been a complete sociopath before she lost her memory (cough, cough, Firefly/Serenity) and she also the ability to acquire other people’s dreams – or are they memories?

But that’s it for subtlety. After that, it’s business as usual, with some quite generic, averagely shot and choreographed fight sequences, and people doing obviously stupid things because it’s that kind of show and people need to do stupid things for the plot to progress. The big bad guys are, as usual, big mining corporations telling people to get off their land in an outer space wild west (cf Firefly). The big twist – (spoiler alert, if you need one: the goodies are actually mercenaries doing evil things for the corporations) – is pretty obvious. And enough of people’s identities are revealed that there’s not much hope for any of them turning out to secretly be intergalactic pro-celebrity Lacrosse champions or embittered puppeteers.

All the same, there’s a sense of fun to it. There’s nothing here that you won’t have seen before, particularly if you’ve watched Blakes 7, but you won’t be bored while you watch it and the cast if reasonably appealing, even if I managed to explain this entire episode without mentioning one of them at all, he’s so superfluous (sorry, Marc Bendavid).

Movies you should own: The Andromeda Strain (1971)

You should buy The Andromeda Strain on DVD
[…]