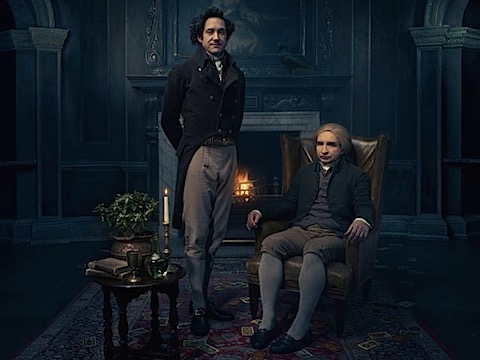 As we all know, it’s been a long, long time since any great acts of magic have been performed on these British Isles. Hundreds of years, in fact – perhaps not even since the time of the Raven King.

There are, of course, theoretical magicians still, those with the wit to discuss spells and the history of magic. But practical magicianship is something that no true gentleman would even contemplate. One might even conjecture that true magic is no longer even possible, leaving us with just street magicians and their mere tricks of confidence.

At least, that’s what we’ve been led to believe. Yet one Mr Norrell, a resident of the city of York and collector of rare books, maintains that in fact not only is magic possible, but that he is in fact a fair practical magician. And he would like to put himself at the services of the country in our current war against France and the tyrant Napoleon.

About
Jonathan Strange & Mr Norrell is set during the Napoleonic Wars in an England where magic once existed and is about to return. So begins a dangerous battle between two great men. Eddie Marsan (Ray Donovan, The World’s End), Olivier award-winning Bertie Carvel (Restless, Matilda), Charlotte Riley (Wuthering Heights, Easy Virtue), and Alice Englert (Ginger & Rosa, Beautiful Creatures) star in the seven-part mini-series, which has been adapted from Susanna Clarke’s bestselling novel by Peter Harness (Wallander, Doctor Who) and directed by Toby Haynes (Sherlock, Doctor Who).

1806. England is beleaguered by the long war with Napoleon and centuries have passed since practical magicians faded into the nation’s past. However, scholars of this glorious history discover that one remains — the reclusive and skillful Mr Norrell (Marsan). His displays of magic soon thrill the nation. In London, he raises the beautiful Lady Pole (Englert) from the dead and summons an army of ghostly ships to terrify the French.

Soon the cautious and fussy Norrell is challenged by the emergence of another magician: the brilliant novice Jonathan Strange (Carvel). While trying to secure his beloved Arabella’s (Riley) hand in marriage, he meets a vagabond, the magician of Threadneedle Street, Vinculus (Paul Kaye, Game of Thrones, Stella), who tells him he is destined to be a great magician. Young, handsome and daring, Strange is the very antithesis of Norrell. A dangerous battle ensues between the two great men. Their obsessions and secret dabbling’s with the dark arts will cause more trouble than they can imagine.

Is it any good?
As great as it is to have had Doctor Who back for 10 years now, it’s now well and truly sunk itself into the DNA of BBC One – from Merlin through Robin Hood through Atlantis through Musketeers, not only has everyone involved probably worked on Doctor Who at some point, but everything feels a bit Saturday ‘family tea time’, whether it’s on at Saturday tea time or, like Jonathan Strange & Mr Norrell, is on at 9pm on a Sunday.

Adapted from the best-selling and rather excellent Susanna Clarke novel of the same name, this BBC One version suffers quite considerably from this DNA injection. Now, the book itself is something of a pastiche, written in faux 19th century English, somewhat in the style of Jane Austen, but also of Dickens and various other authors of the time. It’s as much about manners as it is about magic.

However, director Toby Haynes and writer Peter Harness have gone for more Harry Potter via Doctor Who, with a cast that knows it’s not doing anything too serious and a computer graphics team that can turn what could be the most spine-chilling moments into poorly realised episodes where you quite fancy sipping an Ovaltine. It’s less Jane Austen, more John Poole.

The first episode hurtles through the highlights of the start of the book, introducing us in turn first to Mr Norrell (Eddie Marsan), the self-taught mage with few social skills who wants to rise in London society, and then to his future pupil and then rival Jonathan Strange (Bertie Carvel), taking time to visit various supporting characters along the way. Apart from Marsan, everyone more or less turns to camera with a knowing wink every time they get a line of dialogue, giving you not the slightest feeling that anyone’s in any trouble.

While it does get better over the course of the episode, this feeling never quite disappears, even when Marc Warren turns up as a malicious fairy who can bring people back from the dead, his potentially terrible aspect neutered by his looking for all the world like he’s walked out of an am-dram production of A Midsummer Night’s Dream, complete with leaf-encrusted tunic and Doc Brown wig.

It’s a shame, to be honest, because in the hands of someone like HBO that might have the budget to do this properly, and a production team intent on producing an adult drama, it wouldn’t have taken much to turn in something 1,000 times a better. As it is, this is more like an adaptation of a poor Young Adult fantasy novel, which doesn’t do the original or those involved any credit.