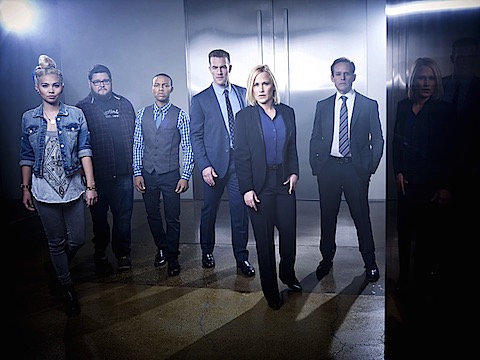 In the US: Wednesdays, 10/9c, CBS
In the UK: Acquired by Channel 5 for Spring broadcast

For a long-time, CBS’s CSI franchise had a world record. One of its glorious members, which included CSI: Crime Scene Investigations, CSI: Miami and CSi: New York, was not only the most watched TV show in the world, it was also the most stupid. It was just atomically stupid – if you could have distilled the stupid in CSI: Miami and then drunk it, you could have proved maths wrong because if you have a 1 and you add 1 to it, you get 11, not 2, don’t you, nerd? And then the world would have ended and we’d have reverted to an agrarian, barter-based economy that could only ever trade one item at a time.

But the era of CSI: Miami is no more, David Caruso is no longer on our screens and the world’s average IQ has increased by a point or two as a result. That doesn’t mean the Carusometer doesn’t miss it, of course, but all good things come to an end eventually.

Since the demise of CSI: Miami, CBS has made a concerted effort to come up with shows equally as stupid, the latest of which has been Scorpion, in which a bunch of technical geniuses get together to fight crime and solve problems by attaching ethernet cables to 747s as they fly overhead. Even if you have no knowledge of IT at all, you can probably tell that’s as dumb as hitting yourself in the face with a brick. All the same, Scorpion has never quite hit the heights of CSI: Miami’s awe-inspiring numbskullery.

Clearly hoping to fill the stupid vacuum and perhaps ultimately bring back the plough and chicken-swap meet, CBS has asked the CSI producers to come up with something that makes you feel like a drill is slowly working its way through your temple and into your frontal lobes while you watch it. And they’ve come up trumps again, with an astonishingly poor piece of television that once again has the power to reduce propositional calculus down to “Because duh!”

Originally piloted as an episode of the mothership, CSI: Crime Scene Investigations, CSI: Cyber eschews the tyranny of geography and the physical in favour of the unlimited potential of cyberspace, giving us a crack unit dedicated to fighting computer crime around the US. A decent idea with a lot of potential, one might think, with the opportunity to fight state hackers employed by Russia, China and North Korea, intent on stealing government secrets; organised gangs who write ransomware or extort major companies with phishing emails and DDoS attacks; or break-ins into SCADA systems by terrorists. The opportunities are vast, the scale of the problem potentially massive. This could be big.

So naturally, for this first episode, big boss “cyber psychologist” Patricia Arquette petitions her mumbling growling boss, Numb3rs’ Peter MacNichol, to put her five-strong FBI team in charge of an investigation into a baby kidnapping. Because the parents heard ‘foreign voices’ on the baby intercom.

Just have a think about that for a minute. Think about the sheer mind-numbing, xenophobic implausibility of it all. One day, you’re busily chasing people who know how to perform MySQL injections, exploit zero-day Adobe Acrobat security flaws and use Tor to navigate the ‘dark web’. The next, you basically decide to get yourself onto a case in which an actual person has been kidnapped, possibly by people with guns, because there’s a chance that both a piece of electronics and foreigners were involved.

Okey doke. Where are my Shades of Justice?

Of course, despite the fact that you’d need dozens, if not hundreds or even thousands, of highly trained, highly intelligent computer scientists working round the clock to service all the computer crimes already being committed in the US at the moment, the Oscar-winning Arquette – who’s apparently already undergoing the surgical procedure that turned Golden Globe-winning actor David Caruso into CSI: Miami‘s Carusobot – has opted for the lesser known “They’ll do” approach to assemble her team. As well as her half-robot self, she has “soldier boy” James Van Der Beek to stride around doing manly things like shooting. His qualification for this particular job is that he likes gaming. No really. This is official:

Elijah Mundo (James Van Der Beek) is Avery’s second in command and a senior field agent assigned to FBI’s Quantico Cyber Crime division. He is an expert in battlefield forensics, weaponry, vehicles and bombs. An avid gamer, on or off duty, he’s always on the field of battle.

Van Der Beek has, of course, been doing very well for himself in comedy shows for the past few years, something for which he has actual talent. Unfortunately, his over-sized Connecticut brain apparently won’t let him embrace the stupid so readily, because he prowls through every scene like he’s about to deliver the best one-liner you’ve ever heard – one so good it will coruscate the absolute ridiculousness of everything he encounters. Except he never gets to say it and he just sort of smirks instead. Take a look at that promo shot above: he can’t even take that seriously. Every cell in his body wants to send this show up.

After that, it all starts to get even sillier. You didn’t think that was possible, did you? We have a former black hat hacker (Shad Moss), whom the team had previously arrested, out on a sort of prison-release programme to help them – it’s CBS, he’s black so naturally, he’s the criminal; we have the white hat hacker (Charley Koontz) who caught the black hat hacker and is largely there to emphasise the point that anyone male who knows about computers must be overweight and not especially good with people (cf Scorpion); and we have a not-overweight female geek, who because she’s female tackles the girly end of cybercrime over in social media and ‘cyber trends’. I’d make an IT pun on ‘token’ at this point, but I’m pretty sure no one on the show’s writing staff would get even that level of techy in-joke.

Now there is a golden rule that it’s easier to take a good writer and teach them about a subject than to take a domain expert and teach them how to write, so to some extent expecting the writers of CSI: Cyber to know their TCP packet from their PGP envelope is unrealistic. Even if they did, that’s not the stuff of which drama is easily made.

All the same, there’s not really that much excuse for starting the whole process with bad writers. Because the writing on this is bad. So, so bad. Even once you get beyond the ridiculous foundations of the show, the dialogue is just painful to listen it, the plotting makes you want to scream and the characterisation comes down to everyone shouting out their own live-action doxing. The acting is uniformly bad, from the central cast through to guest actors who seem to be auditioning for musical theatre the whole time. Even the set design is woeful, with our team of top computer experts forced to work in a generic giant-monitor-filled room, in front of their incredibly tidy desks, with not an IEEE specs document or Oracle manual in site. Where are the dozens of quarantined PCs grinding away under the desks? Where are the extra hard drives being forensically mirrored? Somewhere else, being looked after by the people doing the real work? People who are allowed to sit down on chairs?

If there’s one thing to come out of this whole sorry mess, it’s a realisation that CSI: Miami got through some pretty dreadful writing and years thanks to an engaging cast, some great photography and the power of android acting. Without those, you end up with something as truly dreadful – and not even entertainingly dreadful like Scorpion – as CSI: Cyber.