Last round up for a fortnight, since I’m going to be away next week, but I’m going to leave you with a couple of interesting titles. Superman Doomed #2 doesn’t quite end the almost interminable ‘Superman Doomed’ crossover storyline but gets us within striking distance, and with Charles Soule and Greg Pak co-writing, it’s both a good read and one that does the Amazon princess credit – indeed, she’s very much a core plot point.

Meanwhile, Sensation Comics Featuring Wonder Woman #7 fulfils its remit to give us out-of-continuity Wonder Woman stories with a quirky little tale so far out of continuity, the question of whether it’s even Wonder Woman or not is intriguingly debatable. I even get to go all Greek and mention the Theseus paradox.

Superman Doomed #2
Plot
So where were we? To be honest, I can’t quite remember exactly what the last issue was – DC really need to make these things more regular if they’re going to bother with them. And advertise which issues everything’s in, too.

Anyway, carrying on the general plot, Lois Lane had been taken over by Brainiac but has now recovered her consciousness, just as Brainiac started draining the brains of everyone in the world – with the exception of a few plucky superheroes and superheroines, who are having to dealing with Cyborg Superman, who turns out to be Supergirl’s dad.

The goddess Wonder Woman is immune to both Brainiac’s mind tricks and the Phantom Zone so has gone into the zone to get help. And because she’s aces and has the Lasso of Truth, she manages to defeat both Mongul and his henchman and take over Warworld to give Brainiac’s mothership a bit of a pummelling.

Meanwhile, Superman has gone superdoomsday in an effort to fight off Brainiac.

Most of the issue is actually a series of brain chats, the first between Lois and Superman, where she tries to return Clark to a state of compos mentis so he can defeat Brainiac, and then between Superman and Brainiac. The latter does a kind of inverted Twilight: Breaking Dawn on us, with Brainiac showing Supes the utopia he’ll get if he sides with Brainiac, rather than fight him – because Brainiac’s gone all quantum mechanical and thinks that if he gets enough observers to observe the universe the way he wants, he can remake the universe and return his wife and child back to life in the way that he wants. All that brain-sucking is in a good cause, basically.

This Darwyn Cooke-esque utopia also sees Superman and Batman palling around in a future without crime.

Notice someone missing? Superman does.

And Clark quite sensibly decides that a utopia is not a utopia if Diana’s not in it.

With the help of telepathic Lois and Martian Manhunter, Superman gains control over Brainiac’s big bottle of observation and creates a black hole into which to suck Brainiac and his mothership. Which he’s in, obviously. Oops.

Is that it for Superman? Crushed into a singularity?

Apparently not. Because sci-fi fans, we all know what’s at the bottom of a black hole, don’t we?

Is it any good?
It has an awful lot to do, an awful lot of characters to deal with and an awful lot of plot to handle – it’s roughly double the number of pages for a normal comic, in fact. But actually, as is typical of both Pak and Soule, it does a very credible job of servicing everyone well, adding more depth and pathos than you’d normally expect, and giving us a lot of fun at the same time. Indeed, rather than necessarily a big ‘bang, smash, clobber’ issue to conclude the main thrust of the plot, this is one about emotions and relationships, with Superman, Wonder Woman, Brainiac, Lois Lane and even Lana Lang’s various motivations not just there for dialogue but to drive and transform the plot.

In fact, in other titles, such as Superman: Unchained or Wonder Woman, any mention of the Superman-Wonder Woman relationship is studiously and bizarrely avoided, to the extent that if either of them has their life on the line, practically everyone in the entire world gets mental priority over the doomed character’s significant other. Here, though, the Superman-Wonder Woman relationship is crucial to the plot, the lynchpin that stops Superman from accepting Brainiac’s argument.

On the more ‘bang, smash, clobber’ side of things, however, Wonder Woman, despite her relatively brief appearance in the title, also manages to shine in her significant page, defeating a major Superman villain, Mongul, and another Phantom Zoner single-handled – although good artwork subtly suggests it’s wasn’t necessarily the easiest of tasks.

One thing of note from that page is that the Lasso of Truth seems to be reverting to its Golden Age function of being able to compel others to perform actions, not just to tell the truth, with Diana using the Lasso to compel Mongul to control Warworld.

It’s something that was actually a deficiency in post-Crisis DC, IMO, since it made Wonder Woman less powerful and more passive. Let’s hope this is something here to stay and to spread to other comics.

Obviously, if you’ve not been reading the whole storyline, I wouldn’t recommend buying this, but it’s a credible and illustrative way to end the story. And if we note that last week we had a time-travelling Superman meeting a future Wonder Woman, maybe this is how it all ties into Futures End. We’ll see soon enough, at any rate.

Sensation Comics Featuring Wonder Woman #7
One of the biggest complaints about the nu52 Wonder Woman is that she isn’t feminist enough. While obviously this has been a long-standing complaint amongst readers for the past few years, it’s got particular attention of late thanks to an interview with incoming Wonder Woman artist David Finch in which he said: “We want her to be a strong – I don’t want to say feminist, but a strong character. Beautiful, but strong.”

Wonder Woman not a feminist? Hmmm…

To a certain extent, one can argue the difference about explicitly being a feminist and implicitly being a feminist, although Wonder Woman has largely felt like a men’s rights activists title for the past three years, with the terrible atrocities those evil Amazons were guilty of against helpless men being the biggest gender politics discussion so far. Yes, once the Amazons have removed that huge plank of their discrimination against men from their own eyes, only then will we be able to talk about the teeny tiny speck that is worldwide patriarchy and it’s ever so minor effronteries against women.

Whatever side you come down on as far as the nu52 is concerned, the out-of-continuity Sensation Comics at least has been largely devoted to Wonder Woman’s pre-nu52 concerns. In issue #4, we got to see that a female role model for boys is no bad thing, while issues #5–6 were more of a sub-textual attempt to explore pick-up artists and ‘negging’, and how a woman’s faith in herself can enable her to overcome male attempts to diminish her self-esteem.

Despite being out-of-continuity, all these issues have fit into universes similar to existing DC continuities. But, issue #7 is the first to really venture into more extreme continuities, giving us a Wonder Woman who’s come from Paradise Island and its gods not to be a superheroine, but a rock star.

While this isn’t entirely new, with Cliff Chiang’s calling card to the world of Wonder Woman being his depiction of her as Joan Jett…

…this is the first time we’ve properly had a comic strip in which Wonder Woman is a rock star.

“Is this Wonder Woman still?” one might ask. And indeed, writer Sean E Williams uses this opportunity to answer this Theseus paradox of how many things you can subtract from something before it stops being the original thing. This Wonder Woman dresses like Wonder Woman (a combination of her Golden Age outfit and echoes of her Cathy Lee Crosby tracksuit), has a band called Bullets and Bracelets, seems to have a boyfriend called Steve…

…and even has the strength of Wonder Woman… 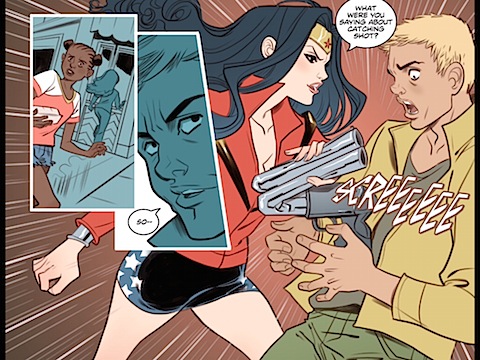 It’s not the first time this question has been asked – one can easily ask whether this DC Nation short, for example, is properly Wonder Woman or not (the answer being ‘If DC says it is, it is’).

But Williams instead illustrates what he thinks makes Wonder Woman Wonder Woman – feminism. Now, to be fair, it’s not a very subtle feminism, although given how short these Sensation Comics issues are, it’s a wonder that there’s any subtlety at all. It’s also a feminism that probably won’t convert those who aren’t already converted, which is presumably everyone reading a Wonder Woman comic anyway. And this is more about giving the fans what they want than about good storytelling.

Yet, Williams manages to answer the question he’s set remarkably well, and also gives us a more modern feminism, interested in newer issues, than a retro comic normally would. So we have touchstone topics of ‘slut shaming’ and the question of who a woman is/should be dressing for handled in attitudes towards Wonder Woman’s outfit on just one page.

…compassion towards the poor, particularly poor girls who are de facto members of the sisterhood…

…and as if that wasn’t enough, an almost direct authorial comment on the need for feminism in the US.

It is very much all fan service and one might question why Athena, the goddess of wisdom, would claim that America was the ‘last citadel of democracy and equal rights for women’ rather than Scandinavia – hell, Iceland even has a statue of Pallas Athena right in the middle of Reykjavik…

…other than because Wonder Woman is effectively an American superheroine.

But that’s not the point of course. This is a strip about feminism, with Wonder Woman American feminism incarnate.

And as long as you don’t take that away, it seems, you’ve got Wonder Woman.

The news for Thursday 9th December 2010

A review of Superman/Wonder Woman #2