Sorry, loyal readers, I’ve been away for a month so I’ve missed out all of August’s comics featuring Wonder Woman, and life being too short, etc, I won’t be playing catch up with August’s annuals, Superman Wonder Woman #11, Supergirl #34 et al, I’m afraid. Onwards and upwards and all that.

Fortunately, for some reason, DC has delayed releasing most of the usual Wonder Woman titles until tomorrow, though, so last week only gave me a few titles with which to kick off coverage again. The first is Justice League #33, in which Lex Luthor petitions to become part of the Justice League, largely by trying to deal with the alternative universe Green Lantern ring that’s taken hold of one frightened human, who for reasons best known to them is sought after by the Doom Patrol.

Batman sorts out the bad Lantern in a somewhat surprising way, but decides to persuade the rest of the Trinity that maybe having Lex Luthor on board isn’t such a bad idea – since it means that they can keep an eye on him.

There’s not a lot for Diana to do, beyond fight, plan and promise to give Steve Trevor a call (to have a word with him about the Doom Patrol, obviously), and if you’re as tired of ongoing storylines as I am, then the inability of both Forever Evil and, elsewhere, Superman: Doomed, to actually end is more than a bit wearing. But it’s fine for what it is.

However, the big news when I was away was the launch of weekly digital comic, Sensation Comics featuring Wonder Woman. Named after the comic that launched Wonder Woman in the first place, it exists as a way for authors and artists to create weekly Wonder Woman comics that are ‘out of continuity’ – that is, nothing in them affects existing nu52 continuity and they can in fact be set in any other, non-nu52 continuity, whether it be post-Crisis, Golden Age, Odyssey or even one of their own invention.

So what have authors done with it so far? Let’s have a brief chat about that, as well as the latest issue, after the jump.

Anyway, you’d think, given this opportunity and the fact that the likes of Gail Simone were happy supporters (and writers of) pre-nu52 Wonder Woman that the first few issues of Sensation Comics Featuring Wonder Woman would be sops to those long-term fans who’ve spent three years grousing on Facebook that this isn’t their Wonder Woman.

Except it’s not been that all. Simone’s issues 1 and 2 were essentially big fights between Wonder Woman and Batman’s arch-enemies in which she first defeats them then uses the lasso of truth to show them what their real problems are, after which they go into therapy. Although these two issues did use this out-of-continuity opportunity to in effect end all Batman’s adventures – a noble endeavour… – use the old costume, and bring in the Amazons, they didn’t really do much to exploit Wonder Woman’s supposed pre-nu52 traits.

Indeed, despite having a magically sharp boomerang tiara, Wonder Woman instead gets some W baterangs made for her by Io the Amazon – an innovation that basically makes her more like Batman, not pre-nu52 Wonder Woman.

Given that Simone gave Wonder Woman power over lightning during her run, this is something of a surprise.

Issue 3 may or may not have been set in the nu52 continuity, given it used Wonder Woman’s nu52 costume, but again, it was largely a big fight, this time against a proper Wonder Woman adversary, Circe. Except rather than it being the nu52 Circe, last seen in the now-cancelled Men of War #2…

…it was the post-Crisis version.

Again, lots of fighting, not much subtlety, with Diana just outmuscling Circe and saving the civilians. Perhaps the only real nod to old-school Wonder Woman is that the story ends with Diana sticking up for the rights of young boys to find her a suitable role model.

But even that’s something that’s not entirely disappeared in the nu52, as we saw in Superman/Wonder Woman #4.

Sensation Comics #4 is a slight departure from this path, in that it retells (yet again) one of the most iconic moments of Wonder Woman continuity: the Contest, in which Diana, in disguise, fights the other Amazons for the right to leave their home on Paradise Island to return Steve Trevor back to the mainland. It’s been retold in virtually every continuity, right down to the TV series.

Notably, the nu52 has yet to relate the full story of Wonder Woman’s departure from Paradise Island, although parts of it are alluded to in Forever Evil: Argus #1-3. And issue 4 of Sensation Comics… does nothing to change that, being set in some ambiguous pre nu-52 continuity. Instead, it looks at (one version of) Diana as a child, seeing how she trained to be the best of the Amazons, including her mother. 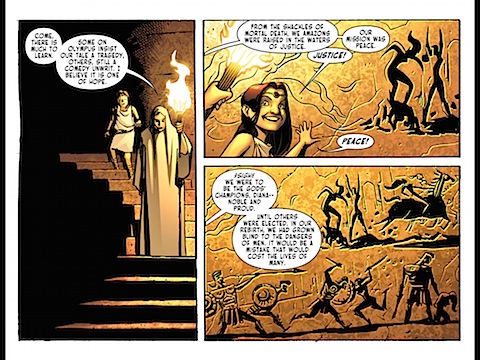 Whichever Steve Trevor or continuity this is, his arrival launches the Contest, which – surprise, surprise – Diana wins. The slight twist to this version? She beats her mother to get the title.

It’s quite a sweet, once-again female-centric version of the story that distills its most iconic elements down for this naughtier version of Diana. It gives elements of the old Wonder Girl comics; the long-absent post-Crisis Athena in a form worthy of being worshipped; a Diana not that much stronger than the other Amazons as per the original Golden Age tales; and a real mother-daughter tale that’s really very lovely.

There’s not much that’s new, obviously, but it does give us a hint that Sensation Comics isn’t simply going to be a weekly ‘hitting things’ title and might well give some of those old-school fans something they’re not getting from the nu52 – even if, being out of any continuity whatsoever, unfortunately for them, it all signifies nothing.

A look at this week’s Wonder Woman comics