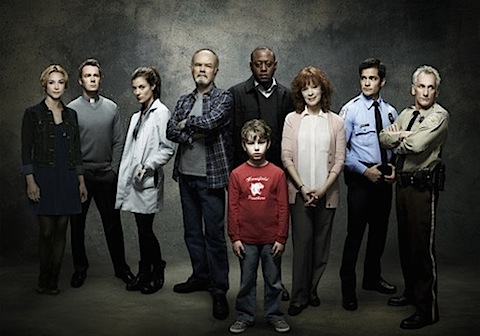 Sometimes, miracles really do happen. I’m not talking about the dead coming back to life – well, not yet I’m not. I’m talking about the fact that two people around the world can have practically identical ideas and for both these ideas to be turned into TV series.

In France, for example, there was a movie called Les Revenants (‘The Returned’), which in turn became the basis of a Canal+ TV series by Fabrice Gobert called Les Revenants that was shown on Channel 4 in the UK and the Sundance Channel in the US. In it, the dead come back to life in a small town, revealing all kinds of issues and relationship problems, including in some cases mysteries about how they died. In particular, there’s a weird boy who’ll do your head in.

Meanwhile, over in the US, a man called Jason Mott wrote a book called The Returned, which has new become the basis of ABC’s Resurrection, in which the dead come back to life in a small town, revealing all kinds of issues and relationship problems, including in some cases mysteries about how they died. In particular, there’s a weird boy who’ll do your head in.

Spooky, huh? And I haven’t gotten started on the fact that the almost identical Babylon Fields is being remade right now, as is Les Revenants.

About
The people of Arcadia, Missouri are forever changed when their deceased loved ones suddenly start to reappear. An 8-year-old American boy (Landon Gimenez) wakes up alone in a rice paddy in a rural Chinese province with no idea how he got there. Details start to emerge when the boy, who calls himself Jacob, recalls that his hometown is Arcadia, and an Immigration agent, J. Martin Bellamy (Omar Epps), takes him there. The home he claims as his own is occupied by a 60-year-old couple, Henry (Kurtwood Smith) and Lucille Langston (Frances Fisher), who lost their son, Jacob, more than 30 years ago.

While they look different, young Jacob recognizes them as his parents. Lucille is overjoyed at the seeming miracle of her son’s reappearance. Henry is reluctant to accept that Jacob is back. Those closest to the family want answers, including Sheriff Fred Langston (Matt Craven), whose wife Barbara drowned 30 years ago while trying to save Jacob, and Fred’s daughter, Maggie (Devin Kelley), a local doctor. Pastor Tom Hale (Mark Hildreth) seeks a spiritual reason for what’s happening in his community. When things take an even more shocking turn, Maggie’s life-long friend, Elaine Richards (Samaire Armstrong), finds herself drawn into Arcadia’s growing mystery.

Bellamy, an outsider in the town, joins forces with Maggie to figure out why the unexplainable is happening in Arcadia. As their investigation plays out, Maggie learns some unsettling truths about her own past. Will they be able to solve the mystery of Arcadia before the rest of the world catches on to events there? And will they be able to protect Jacob from forces beyond their control?

Is it any good?
Actually, it’s very engaging and thoughtful, I was surprised to discover.

The difference between Les Revenants and Resurrection, besides one being set in France, the other in the US, is that as with practically every US show, as well as the implications of resurrection for God, Christianity and Christians being examined, there has to be a hero with a badge: in this case Omar Epps from House as an immigration services agency who has to take weird boy back from China, where he’s woken up 32 years after his death, to his home in Arcadia – there’s another spooky: Amber Tamblyn starred in Babylon Fields and, of course, she also starred in Joan of Arcadia.

Once in Arcadia, after nearly shocking to death the boy’s parents (Kurtwood Smith and Frances Fisher), Epps and the rest of the town have to decide whether they believe in miracles or not, and to see if the boy really is who he says he is. Along the way, Epps’ investigations reveal all kinds of exciting intrigues that should have remained buried, as well as the boy’s attractive doctor-cousin (Devin Kelley from The Chicago Code). But then it turns out that weird boy’s not the only member of the dead to have returned recently.

On the whole, Resurrection is probably about as good as Les Revenants, but with a slightly different angle: rather than being creepy, it’s aiming for uplifting; rather than an ensemble piece, it’s largely about Epps. But it’s a thoughtful piece, with no real action, just the concerns and emotions you’d expect if small-town America discovered its loved ones were returning.

And at eight episodes – the same number as Les Revenants, spookily enough – it should be easy to stick with to the end. Definitely one to try.