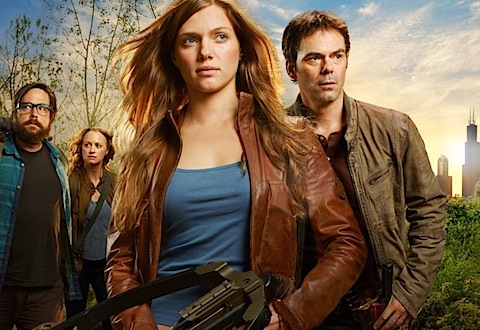 In the US: Mondays, 10pm/9pm CT, NBC. Starts September 17th
In the UK: Not yet acquired

Family television. I hate it.

Okay, not all family television. It can be great. Look at Sapphire and Steel or Codename Icarus. Or Doctor Who.

But largely, family television is a miserable land of compromised, unchallenging, lowest common denominator plotting, conservative values occasionally masquerading as liberalism and attempts to be all things to all people. Plots are never too threatening or ever change the status quo significantly. There are magical MacGuffins that only children could believe in. Characters never move outside of traditional, largely patriarchal family relationships and stereotypical gender relationships. And everyone learns a (traditional) lesson about life, family and love by the end of it all.

And it’s not just primetime, now. For some reason, family programming can stray into the 10pm slot in the US. This is not when family dramas should be on, America. This is when kids should be in bed.

With Revolution, we have a prime example of family programming: the turgid, lifeless, recycling of limp ideas, stale characters and by-the-book writing that characterises the genre. Surprisingly, it’s from Eric Kripke (Supernatural), Jon Favreau (Iron Man) and JJ Abrams (Alias, Lost, Alcatraz, Star Trek et al), who are all capable of much, much better but because it’s family programming they’ve dumbed down.

So, here’s the story: 20 seconds into the future from now, mysteriously the laws of physics are going to change. Suddenly, electricity is going to stop working. No batteries, no mains current. Nothing.

Well – and they don’t make this explicit for some reason – all electricity apart from, say, anything in your body that requires the movement of electrons to work such as your nerves, muscles or, in fact, every single cell you have, of course. Apparently, that’s some other set of laws of electromagnetism that makes them work. The jury’s still out on ions, and covalent and hydrogen bonds, mind, but I’m sure Revolution will get there eventually once everyone’s perms start to fall out, salt crystals fall apart and no one gets static electricity from carpets any more. No more oxidisation, no more reduction. Chemistry is going to be so much easier, but we’ll miss that thing with balloons sticking to people’s jumpers, I’m sure.

However, one man knows this very selective change in the law of physics is about to happen and he’s preparing his family for the oncoming apocalypse. He’s also got some top-secret computer files in a special USB necklace that explain EVERYTHING.

Cut to 15 years later and the world has fallen apart. America is now a set of different, feudal republics. Everyone’s become an agrarian subsistence farmer and there are local lords to appease. But The Secret People Behind It All want that man and his files, which might explain how to reverse The Changes. They also want his brother, who also might know something.

So watch The Changes meets Jericho meets feudalistic collective farming techniques as a daughter and a son struggle to survive in an inhospitable – but not exactly even Z for Zachariah harsh – world and learn a little about family along the way. There’ll be sword fights! Really implausible sword fights! There’ll be baddies! Who won’t really do anything bad! There’ll be bad boys! Who quite like nice girls who aren’t too threatening, who wear nice clothes, look very clean and have nice teeth, despite the end of washing machines, Persil and American dentistry as we know it!

Starring the dad from Twilight! Featuring lots of bows and arrows like in that movie The Hunger Games that you like! It’s empty, vapid and it’s coming to NBC soon! It’s Revolution!

Here’s a trailer featuring Andrea Roth before she was replaced by Elizabeth Mitchell. It gives away just about everything from the first episode but don’t worry about that.

About
What would you do without it all? In this epic adventure from J.J. Abrams’ Bad Robot Productions and “Supernatural’s” Eric Kripke, a family struggles to reunite in an American landscape where every single piece of technology – computers, planes, cars, phones, even lights – has mysteriously blacked out forever. A drama with sweeping scope and intimate focus, “Revolution” is also about family – both the family you’re born into and the family you choose. This is a swashbuckling journey of hope and rebirth seen through the eyes of one strong-willed young woman, Charlie Matheson (Tracy Spiridakos, “Being Human”), and her brother Danny (Graham Rogers, “Memphis Beat”). When Danny is kidnapped by militia leaders for a darker purpose, Charlie must reconnect with her estranged uncle Miles (Billy Burke, “The Twilight Saga”), a former U.S. Marine living a reclusive life. Together, with a rogue band of survivors, they set out to rescue Danny, overthrow the militia and ultimately re-establish the United States of America. All the while, they explore the enduring mystery of why the power failed, and if – or how – it will ever return.

Is it any good?
In the final few minutes of its first episode, the show almost redeems itself and there’s a cracking, but somewhat implausible sword fight (Billy Burke, in the centre of a circle, surrounded by six or eight guys with swords? He’s dead. End of. Or would be if everyone didn’t take it in turns to attack him) about three-quarters the way through.

But it’s like painting by numbers. Everything’s there in exactly the quantities you’d expect of a family show. There’s the feisty but ultimately useless ostensible female lead (Tracy Spiridakos), who despite 15 years of maturing in a post-apocalyptic dystopia, still hasn’t learnt how to fight and, like every other woman in Revolution, needs a man to save her at every opportunity. I say feisty because that’s her only appreciable character trait other than “abandoned”. Okay, it’s hard in a feudal post-apocalyptic dystopia to take up hobbies, but moping, whining and caring – really, really caring – aren’t really much by way of characterisation.

Then there’s the shifty English (but actually Australian) cynic, Anna Lise Phillips from Home and Away, who always takes the most expedient, morally dubious action that the good guys can’t take because they’re so good but that needs to be done.

There’s the nerd (Zak Orth), who knows things about science and history and stuff, so automatically has allergies, is clumsy and everyone laughs at him. There’s the slightly emo son (Graham Rogers) to appeal to girls who don’t like bad boys like militia boy Nate (JD Pado), who might become good with the love of the right kind of non-threatening girl. And then there’s the real, manly, anti-heroic lead – Billy Burke, the former marine (so naturally a dab hand with a sword), who reluctantly has to be persuaded to join in with the quest – by which I mean accept his responsibilities as part of a patriarchal family by telling everyone else what to do and being stoic, while not getting drunk.

Nothing is too threatening, of course. Just like the 1970s Battlestar Galactica, the whole world may have ended in the first 10 minutes of the show, but that doesn’t mean that industrial supply chains to cities will be too affected and that people still can’t tend bar. What kind of world would that be? An unthinkable one, that’s what, so don’t even try in case it puts people off and they think dystopia might be depressing. If it weren’t for Giancarlo Esposito being all menacing like, you’d think Revolution was Little House on the Prairie but with very slightly grungier costumes.

As with virtually every single other JJ Abrams show ever, there’s a mystery involved, the mystery being the secret conspiracy that brought about the end of Electricity™ (I feel we should differentiate it from actual electricity at this point, since we’re essentially talking about the packaged stuff available from utility companies, rather than the natural occurring stuff). The episode mostly keeps us tantalised, just as every single other mystery show of the last few years (e.g. The Event, Flash Forward, Alcatraz, Terra Nova, Jericho to name but a few) has tried to do. Who are they, why did they do it, what does Billy Burke have to do with it all and how come there’s a magic device that can cancel it all out? But it’s only in the last few minutes of the show that the mystery actually becomes interesting rather than a poorly thought out MacGuffin. It’s still complete bobbins, of course – absolute nonsense that makes no sense. So what’s the point? The conspirators might as well have stolen b flat major for all the realism and plausibility of the scenario. At least The Changes actually involved wizards and magic for this kind of thing.

As you can probably tell from the review so far, the show is very poor. There’s no decent dialogue, no interesting characters, the plot is laughable and its ‘world building’ makes Terra Nova look like Blade Runner. It’s the same tedious set-up of every other Lost wannabe of the last few years and its pursuit of a family audience means it doesn’t have the slightest edge. With only a few exceptions the cast are uncharismatic and uninvolving, and beyond its mystery component, there’s almost no reason to watch the show, to explore the world it’s created or to get to know the blank stereotypes laughingly presented to us as characters.

Frankly, you’d be better off watching this video: it’s more educational, it has a better plot and more interesting characters, and it’s a better guide to what life might be like after a post-Electricity™ apocalypse than Revelation.

What have you been watching this week (w/e August 2)?

A look back at the week’s TV