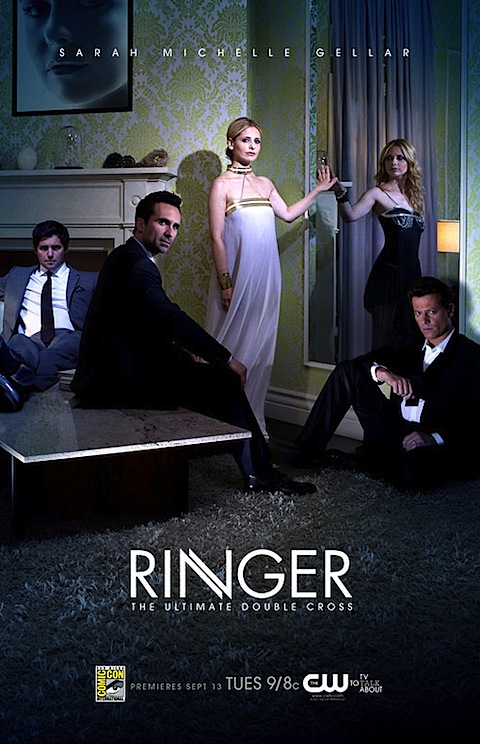 In the US: Tuesday, 9/8c , The CW
In the UK: Acquired by Sky Living for broadcast this autumn

Twins, huh? Why does there always have to be an evil one?

Ringer, in which former Buffy The Vampire Slayer Sarah Michelle Gellar plays a pair of twins, one good, one evil, is no different, but slightly cleverly, it’s not obvious at first who the evil twin is or who the good twin is.

Bridget is a bad girl. A former stripper and prostitute, she’s also an addict who beats up police officers and steals their guns.

Siobhan is a good girl. She has the perfect marriage, lives in luxury in New York and the Hamptons with her English husband (Ioan Gruffudd), and has oodles of cash.

Neither has seen each other in six years. Siobhan hasn’t even mentioned Bridget to her husband.

But the thing is, Bridget is actually the good twin. She’s on a 12-step programme to recovery from her addiction, she’s taken a job as a waitress and she’s helping the Feds because she witnessed a murder.

Siobhan? Well, she treats her husband like dirt, she’s having an affair, loathes her step-daughter and she’s evil, evil, evil.

As Bridget finds out when she gets to New York and ends up taking over Siobhan’s life.

Plot
Sarah Michelle Gellar stars as a woman who, after witnessing a murder, goes on the run, hiding out by assuming the life of her wealthy identical twin sister – only to learn that her sister’s seemingly idyllic life is just as complicated and dangerous as the one she’s trying to leave behind. Bridget is six months sober and starting to turn her life around when she is the sole witness to a professional hit. Despite the assurances of her FBI protector, Agent Victor Machado, Bridget knows her life is on the line. She flees to New York, telling no one, not even her Narcotics Anonymous sponsor, Malcolm.

In New York, Bridget reunites with her estranged twin, Siobhan. Wealthy, pampered and married to the strikingly handsome Andrew Martin, Siobhan lives what appears to be a fairy tale life – a life where no one knows that Bridget exists. The sisters seem to be mending their frayed relationship, until Siobhan disappears overboard during a boat trip, and Bridget makes the split decision to take on her sister’s identity. She discovers shocking secrets, not only about her sister and her marriage, but also about Siobhan’s best friend, Gemma, and Gemma’s husband, Henry. And when someone tries to kill Bridget in her sister’s penthouse, she realizes she is no safer as Siobhan than she is as herself.

Is it any good?
Surprisingly, given the ludicrous nature of the plot, it’s not half bad. It has problems, but it has a lot going for it.

The biggest problem is Sarah Michelle Gellar’s acting choices. For the most part, she’s on-screen as Bridget. For an ex-stripper, ex-addict, ex-prostitute who beats up FBI agents, Bridget ain’t half feeble and whingy – she’s like Buffy after Angel’s gone bad for the first time. Not for a second do you believe this is the character as written. Which is odd, because she can clearly act and does a decent enough job as icy, evil twin Siobhan. Where’s that Buffy fighting spirit gone to?

Next biggest problem is ‘Ioan versus Kristoffer’. If the producers were planning a love triangle, they’ve failed. Ioan’s very likeable as the “would love to love Siobhan and is actually very nice, but knows she’s evil” husband and he’s armed with a top-quality English accent to boot; Kristoffer as Siobhan’s lover exhibits none of the charm or likeability he had in shows like Life Unexpected and Valentine. You obviously want Bridget to get together with Ioan ASAP. Kristoffer doesn’t stand a chance.

But these problems aside, I enjoyed it. I was interested in the characters, although Nestor Carbonell (Richard in Lost)’s FBI agent needs some work yet since he doesn’t actually have a character. It’s all a bit soap opera, but in a good way, and you want Bridget to get Siobhan’s good life by being nice. The plot is ridiculous, but engrossing and there’s enough going on – with both Bridget and Siobhan’s pasts catching up with them – that you want to find out all the machinations and the relationships between the characters.

And then there’s the final scene, which you can see coming, but which opens a whole new can of worms.

It’s not brilliant, but as a bit of escapist fun, it’s enjoyable enough. One to try, at least.

Air dates and pick-ups for US shows

Digital Spy has some news on when ABC shows are going to air in the US this season, as well as which UK networks are picking up the remaining unwanted stragglers. Lost is going to […]

The news for Wednesday 22nd February 2012

The news for Friday 7th February 2008