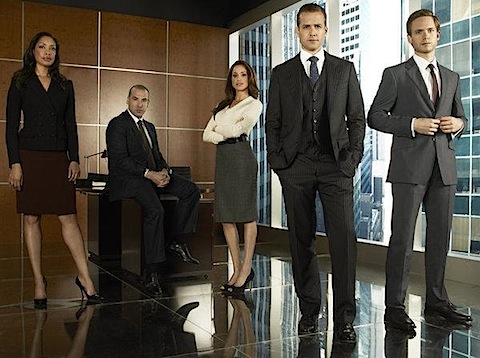 So it’s something of a relief and surprise to find that USA’s new lawyer drama, Suits – I know, I know, like we need another drama about lawyers – is only a little bit fluffy. Because pretty much everyone in Suits is a bastard. Or a thief.

In it, Mike Ross, a college drop-out finds himself in a drug-deal gone wrong. He runs into a job interview for a law firm that only hires Harvard graduates, but because the guy running it, Harvey Specter, is a total dick – and because Ross has a photographic memory that has already allowed him to pass the bar without going to law school – Specter hires him. All they have to do now is teach Ross the difference between the law you find in books and evil, amoral practical law, while keeping the fact that Ross isn’t a Harvard graduate from everyone else in the firm. Oh, and work out what to do with Ross’s briefcase full of drugs.

Plot
Even the best lawyer in New York City can use some help.

While running from a drug deal gone bad, Mike Ross (Patrick J. Adams), a brilliant young college-dropout, slips into a job interview with one of New York City’s best legal closers, Harvey Specter (Gabriel Macht). Tired of cookie-cutter law school grads, Harvey takes a gamble by hiring Mike on the spot after he recognizes his raw talent and photographic memory.

Mike and Harvey are a winning team. Even though Mike is a genius, he still has a lot to learn about law. And while Harvey may seem like an emotionless, cold-blooded shark, Mike’s sympathy and concern for their cases and clients will help remind Harvey why he went into law in the first place. Mike’s other allies in the office include the firm’s best paralegal Rachel (Meghan Markle) and Harvey’s no-nonsense assistant Donna (Sarah Rafferty) to help him serve justice.

Proving to be an irrepressible duo and invaluable to the practice, Mike and Harvey must keep their secret from everyone including managing partner Jessica (Gina Torres) and Harvey’s arch nemesis Louis (Rick Hoffman), who seems intent on making Mike’s life as difficult as possible.

Is it any good?
In common with most USA dramas, there’s a central pairing of eccentric, interesting characters, with peripheral, not-so-interesting characters to support them. Here we have Ross and Specter. Specter is a suit-obsessed, lazy, arrogant Harvard graduate, while Ross is marginally less interesting, despite his criminal activities, criminal best friend and his photographic memory – he’s a little too nice. We also have a surprisingly buttoned down Gina Torres (Firefly et al) as Specter’s boss, who’s a slight twist on the standard angry boss, a typically camp Rick Hoffman as Specter’s suspicious career rival and a dull Sarah Rafferty as the über-professional paralegal Donna, whose one interesting feature is that she’s the mirror image of Ross: she’s very clever, but she just doesn’t test well so fails exams.

Much of the extended first episode, as well as setting up the terms of engagement of the series as well as Ross’s personal life, is dedicated to looking at how law is (supposedly) done, with considerable detail dedicated to things other shows skirt over, such as how to fill out paperwork and how to research cases. We also have the first hints of true fluffiness, with Ross forced to take on a sexual harassment case pro bono to prove his mettle, while Specter uses his powers of evil to, at first, not give a damn, before eventually giving in and saving the day.

Nevertheless, this is a surprisingly good, surprisingly edgy addition to both USA’s slate and the genre. Adams is a little uncharismatic, but the show can get by with Gabriel Macht’s charisma alone. With a little time, it could be a USA mainstay, provided it manages to avoid the dreadful fluffiness lurgie. Fingers crossed.

Some thoughts on a few recent series

Some thoughts on some recent shows

A review of the season finale of Burn Notice
[…]