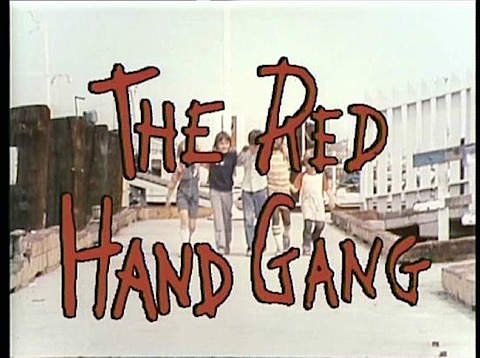 As much as we like to think our TV is great in Britain – and it is, or can be anyway – somehow, US TV was always that much more exciting. Case in point: The Red Hand Gang. Although British TV has had its fair share of children detectives, including The Famous Five and The Secret Seven, somehow The Red Hand Gang – a motley collection of American street kids – was just that much more exciting and dynamic. You could argue it’s a street thing, with The Famous Five and co painfully middle class and “good for you” while The Red Hand Gang with its relatively diverse cast was much more fun. But that didn’t work in the Blue Peter v Magpie wars of the 70s, so who knows? Maybe it was just “exotic” because it’s foreign.

Or maybe it was the insanely catchy theme tune and that kid and his stupid red banana harmonica.

Either way, The Red Hand Gang – so called because they left red handprints on fences wherever they went – saw our intrepid gang of kids fight jewel thieves, kidnappers and more. The gang were:

Unlike a lot of shows, The Red Hand Gang was episodic, with its 12 episodes split into three stories. However, back in America, NBC cancelled it halfway through its run so many kids didn’t even get to see that much.

Shame, because it’s indelibly printed on many a 30/40-something British person’s mind.

And yes, if you’re very good, maybe someone will buy it for you on DVD.