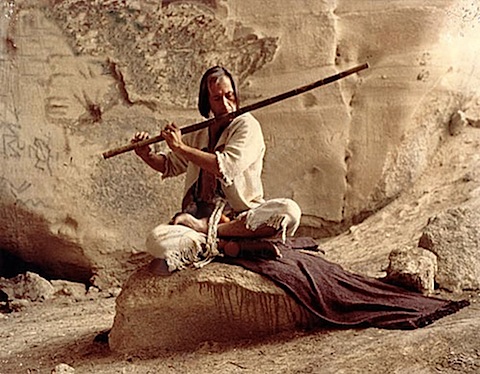 Time to head to controversy corner for this week’s “Weird old title sequence/Lost Gem”, since we’re going to deal with Kung Fu, which may or may not have been Bruce Lee’s idea, but certainly didn’t star him.

Here though, are the weird but incredibly iconic old titles of Kung Fu, followed by the entire pilot movie. More after the jump, including clips from the sequel movie and sequel TV shows.

Kung Fu was, in a sense, an “Eastern”, in which a half-Chinese, half-American Shaolin monk, Kwai Chang Caine (David Carradine), wanders the Old West looking for his brother, doing his level best to be Buddhist but somehow always having fights. Along the way, he encounters prejudice and just about everything the Old West could throw at him, while simultaneously preaching the philosophy of Buddhism; occasionally, he’d also meet some agents of the emperor of China, who were hunting for him – he’d killed a relative of the Emperor for killing his old mentor, Master Po (played by Keye Luke – Charlie Chan’s number one son) – and then he’d have a proper kung fu fight.

Originally, Kung Fu had a relatively simple format, the “fixing-up wanderer”. Caine would wander into a new town, discover some helpless Old West American being put upon, beat up the baddies, then spend the rest of the episode trying to teach the value of Buddhism and pacifism, before beating up the bullies again then moving on. The wrinkle here is that as he does so, we learn about what a crap place the Old West was for women, slaves, native Americans, etc; Caine would also have flashbacks to his time in the Shaolin Temple in China where he was trained, typically to a related incident that illuminated both the modern day incident and gave us a bit more background on Caine.

By about the third and final season, that format began to change, with more and more Chinese mysticism creeping in, and magic being used. It’s possible that that mysticism, the slowness of pacing of the episodes and a general fatigue with fighting might have caused the show’s cancellation at the end of the season. But more probably the ratings, I would have thought.

Who started it?
The show was launched with a TV movie in 1972 that controversially starred Carradine, who was a Caucasian-American dancer with no Asian heritage. It also didn’t star Bruce Lee, which again was controversial: there’s some debate as to who came up with the idea, since Lee was in talks before Kung Fu to appear in a show he’d co-developed called The Warrior, which would have seen him in the Old West, doing martial arts. The Warrior never happened but the very similar Kung Fu did so conspiracy theory your way through that.

Kung Fu was a unique TV show. It was a western when westerns were on the way out. It may not have starred a Chinese-American actor, but virtually every Asian-American actor working in the US at the time probably appeared on it at least once, at a time when there were very few Asian faces on TV at all. It also featured kung fu – at least, ostensibly it did, since until the third season, a good proportion of the fight scenes were judo. Together with the surge in interest in martial arts movies caused by Bruce Lee and Enter the Dragon, it virtually made martial arts and kung fu synonymous.

Its place in pop-culture is also reassured. The nickname of ‘grasshopper’ bestowed on Caine by Master Po was one that soon spread into common parlance. Pulp Fiction famously also had Samuel Jackson’s character wanting to ‘walk the Earth’ like Caine.

Sequels
There were various attempts to make sequels over the years. In 1986, Kung Fu: The Movie reunited Carradine and Luke to continue the story of Caine several years on.

Kung Fu: The Next Generation was a 1987 pilot for a modern-day sequel, with David Darlow playing the grandson of Carradine and Brandon Lee this time playing his son, but this was never picked up.

However, the somewhat dreadful Kung Fu: The Legend Continues, which has an almost identical plot, did get picked up for the 1993 season. Starring Carradine as Caine’s grandson, it featured Chris Potter (currently on CBC’s Heartland) as Caine’s police detective son, separated from his father many years previously but reunited in the pilot. Perhaps the most notable thing about KF:TLC, apart from the heavy, uncritical usage of Chinese mysticism, is the ridiculously slow kung fu fights featuring Carradine.

That lasted all of four seasons, but oddly was never cancelled: it was simply never picked up by another network when PTEN ceased operations.

And that, so far, is the last Kung Fu sequel, despite attempts to get a movie remake off the drawing board. Who knows what time will bring us though…