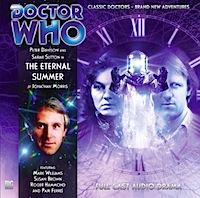 Episode one, The Castle of Fear, ended on a cliffhanger and episode two, The Eternal Summer, more or less carries right on – except it doesn’t.

The Doctor wakes up in a boarding house in Stockbridge, all things right with the world, except he’s not sure how he got there or where Nyssa is. How did he escape that cliffhanger? And who will be the bad guy this time?

Plot
It’s been a long, hot summer in Stockbridge. Longer than the villagers can remember. Summer’s lease is never-ending – and all thanks to the Lord and Lady of the Manor!

One man alone knows that something’s wrong: Maxwell Edison, Stockbridge’s unofficial ambassador to the Universe. Or ‘flying saucer nut’, as the locals have it. He’ll need help proving it: from the local postmistress Miss Nyssa, perhaps; or the village Doctor, the fellow that’s been living at the Green Dragon Inn these last 30 years.

They’d better hope that autumn never comes to Stockbridge. When autumn comes, the world is doomed…

Many Meetings by Marc Platt: In a café, three strangers meet: Polly, the Brigadier and Thomas Brewster. They share one thing in common – they have all travelled in time and space with the Doctor. But now the Doctor isn’t here, and the world is in terrible danger…

Is it any good?
It’s another not bad one, actually. It keeps you guessing to a reasonable extent and has a slight emotional kick to it, too, with the heavenly Stockbridge envisioned by Paul Cornell (apparently) revealed to be a Hell. Although there are points where you want to go, “Hang on, why…?”, all your questions do get answered and nothing terribly out of character happens. Which is a nice change for a Big Finish story.

In fact, it does have more than a few clever touches, including in-scene time paradoxes, time loops, an intriguing villain and more.

There are basically only two problems with the whole thing: the performances and Max. Max is one of those characters who might well work in a comic but who’s a complete twonk in an audio play. You’ll want to stab him. He’s not real, but you’ll still want to stab him.

This issue is compounded by Mark Williams, who while giving a good enough rendition, doesn’t make Max seem any more real than a pastiche of anoraks. Remember that Who fan in the first episode of the Christopher Eccleston series (Rose)? That level of depth, except maybe a bit less.

Pam Ferris is also giving a comedic performance most of the time, and while Peter Davison and Sarah Sutton do well as the Doctor and Nyssa, their attempts at older versions of themselves are pretty risible.

So a good play that makes you think, both in sci-fi and emotional terms, but which is a little let down by the directing of the actors. One to even think about buying at Amazon prices.

The Three Companions
Meanwhile, in the Three Companions, things are actually starting to happen. It’s almost… interesting all of a sudden, as finally the three companions meet up, the reasons for the two previous stories’ congruences start to become explained and we sense the end is in sight. I suspect the next part is going to be the good one, if any of them are going to be.

And now, time for a new feature:

Just how smug and self-congratulatory were the Big Finish team on the CD extras this time?
Very (8/10 on the Russell T Davies meter, with 0 being the Dalai Lama and 10 being Russell T Davies)

Sorry guys, it’s just the way you come across. I’m sure you’re very lovely in person.

My review of the Big Finish play, Nocturne

End of the week news

Review: Doctor Who – Kingdom of Silver