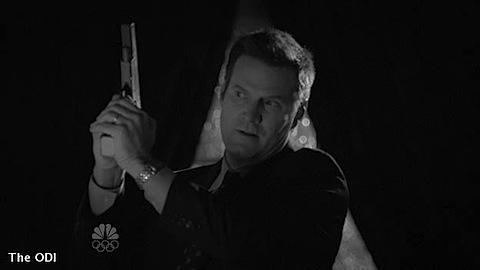 Bit of a mixed bag this episode, with unexpected moments and twists aplenty, but with a few hints of dullness here and there, most of them being Peter and Emma.

Claire (Hayden Panettiere) is determined to get to the bottom of the Sorority Rush attacks on her own, until H.R.G. (Jack Coleman) intervenes only to realize he may be the source of her troubles. Meanwhile, Peter’s (Milo Ventimiglia) new ability is a perfect fit for his job and gives him the opportunity to help Emma (guest star Deanne Bray) accept her new life. Elsewhere, Sylar’s (Zachary Quinto) battle at gaining full control over Matt’s (Greg Grunberg) body escalates — with potentially dangerous implications at stake. Robert Knepper and Adrian Pasdar also star. Kat Purgal, Carlease Burke, Danica Stewart, Candice Patton, Sally Champlin and Assaf Cohen also guest star.

Was it any good?
As usual, we’re in tag team territory, so let’s break it all down into groups:

Matt/Sylar
Probably the best strand of the episode was the ongoing duel between Matt and Sylar over who has custody of Matt’s body. This had the potential to be endlessly tedious, given we’ve been at this for weeks now. But Matt’s mental chess-playing against Sylar proved endlessly inventive, Sylar for once being on the back foot, with only threats against other people enough to keep him on a par with Matt.

For a second, I hoped the producers were actually going to be game enough to follow through and kill off Matt in a suicide by cop bid. The fact his ‘death’ wasn’t the episode cliffhanger robbed me of that delusion, but it was a fascinating moment nonetheless. Also nice: a season one style “twist of fate” with Sylar/Matt dropping by Charlie’s Texan diner following last week’s humdinger of a return.

Peter/Emma
Oh dear. This one slipped back a bit after Emma had done so well with Hiro. While getting more of Emma’s background in and seeing her becoming braver in her normal life was a good bit of character development, having her still sitting around seeing piano colours is getting wearing. Are we going somewhere with this, or is it purely another Peter romance that will get dropped at some point? I’m pretty sure we’re going to get to the bottom of Emma’s significance to the further plot, but we’re on Lostian delayed pay-off levels at the moment.

Peter’s problems with over-using his healing power was at least a decent wrinkle to his plot strand, but mostly just filled time.

Fortunately, things get to move on a bit in her absence, even if they also get cloudier. So Becky’s out for revenge because HRG murdered her empowered father when she was just a kid? Were the carnies genuinely after Gretchen to isolate Claire or what? I’m confused. It all seems to make sense in the Carnies minds though, so let’s run with that.

Good to see at least one of the Heroes standing up to the Carnies and for that Hero to be Claire, who instead of whining and saying “I hate you Dad” a lot, allies herself with HRG, apparently to Samuel’s surprise. This can only be a good thing.

The whole strand was relatively fast-paced, the return of Rene the Haitian was welcome, as was an HRG flashback, and it’s all moving forwards nicely. Therefore, second best strand of the episode.

Nathan/Sylar
Not much screentime for this plot, but it advanced considerably. In a change from the tradition, Sylar runs away from the circus – now convinced he’s Nathan again. With Nathan and Peter finding Matt/Sylar next week, I’m suspecting the Sylar/Nathan strand is going to peak very soon. At least, I hope it is.

Overall
With the exception of the Peter/Emma strand, this was mostly well done. Still slower paced than I’d like, but definitely above average. Next week, Mohinder’s back (and given it’s been two weeks since Strange Attractors, I’m hoping Tracy will be, too) and he’s been watching some old movies his dad made. As quality wildcards go, Mohinder’s the biggest, so fingers crossed, his arrival will be a good thing. You should be able to see what he’s been watching here. Any guesses why Samuel’s so interested in those films and what’s on them?

What have you been watching this week (w/e 24th April)?

A review of the Heroes episode The Wall

“Roll on the weekend” Friday news