Since y’all loves him so much, I thought you might like to know that David Tennant’s Takin’ Over The Asylum is coming out on DVD very soon. Full details below: 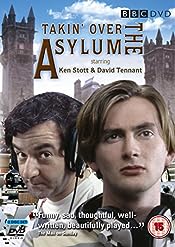 Takin’ Over The Asylum was first broadcast on BBC1 as a six-part series in September 1994. Written by Donna Franceschild, directed by David Blair (Anna Karenina, The Lakes) and starring Ken Stott (Messiah, Rebus) and David Tennant (Doctor Who) in award-winning debut performances plus a cameo from Spike Milligan, the acclaimed black comedy Takin’ Over The Asylum is available for the first time ever on DVD from 9th June, priced £19.99.

Stott stars as Eddie McKenna, a double-glazing salesman who moonlights as a DJ for hospital radio in a Scottish mental asylum. He nurtures close friendships with the patients there including Francine (Katy Murphy, Our Mutual Friend, Honest) a self-harmer and Campbell (David Tennant, Doctor Who) a manic depressive, with whom he shares a dream to make it onto the commercial radio scene.

Campbell’s inspired antics promise to bring the pair closer to their aim, but the pressures of life outside of the hospital begin to tell on Eddie. A vindictive colleague leads his small-minded boss to ban his activities and his eccentric grandmother returns suddenly to Lithuania leaving him penniless and alone.

Eddie finds himself drawn to the troubled Francine, but when the radio is threatened with closure he turns to Campbell for comfort. As Campbell regains control over his life and courts success, Eddie’s goes into decline and he is finally forced to face his own illness – alcoholism.

What have you been watching? Including Guilty Party