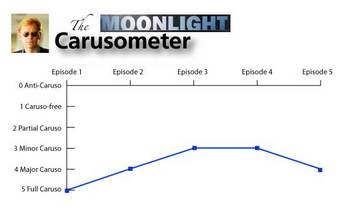 I thought, at first, that I’d spoken too soon. After a dismal first episode that mined every previous vampire story going for any clichés it could find, Moonlight started to show signs of promise. There was some originality in its second and third episodes. The story developed, with the season-long arc you might have expected suddenly coming to fruition straight away. If you’ve been raised on a diet of Angel and Forever Knight, you’d have thought you’d have known what was coming – and you’d have been wrong.

But things started to drop off in the fourth and fifth episodes. While the fourth episode was still no slouch, it had more than trace amounts of stupidity flowing through its veins, as well as a rock video director to mess things up. And the fifth episode was just ridiculous. Not truly abysmal, but certainly full of blatant absurdities that make no sense to anyone who hasn’t been up all night listening to Marilyn Manson records.

The cast are pretty good, although Jason Dohring lacks presence and Shannyn Sossamon is thankfully not present most of the time. It has some niceish moments from time to time, and Mick St John is thankfully not as whiney a git as Angel and Nick Knight were. But it’s still a bit dull, a bit stupid and taking a hell of a lot of time getting to the point.

The Medium is Not Enough hereby declares Moonlight is a 4 or “Major Caruso” on The Carusometer quality scale. A Major Caruso corresponds to “a show that David Caruso might exec produce or star in after reading an Anne Rice novel in an airport waiting lounge. After declaring it the ‘best story ever writen by a woman’, he goes on to cast himself as an immortal Irish vampire with a comb-over. After discovering that he can no longer move fast enough to convince people he has ‘human speed’, let alone ‘vampire speed’, he tries to get into character by biting his own thumb. Discovering it hurts too much, he decides that his character will feed on blood through chocolate straws instead, ‘a major new innovation in vampire mythology’.”