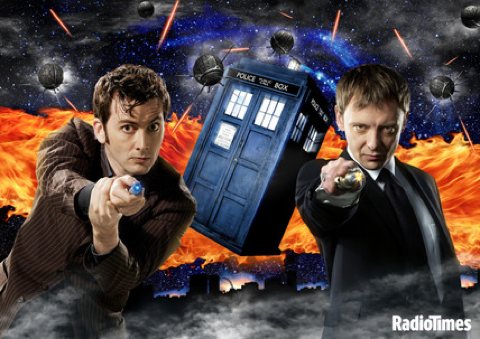 Slightly geeky this, I know, but I was a-pondering because I was just marvelling to myself at how much I liked the last three episodes of the last series of Doctor Who.

As we all know, Time Lords can regenerate. The Doctor, who is a Time Lord, has regenerated many times. Each time he regenerates, his personality changes, yet there is some intrinsic “Doctor-ness” that remains the same from incarnation to incarnation. And as viewers, we accept each different incarnation, even if we prefer some (David Tennant) to others (Sylvester McCoy).

The Master is/was a Time Lord, too. He, too, regenerates and has changed personality with each regeneration.

But, he recently regenerated into John Simm, as you all know. But many people thought he did not have enough “Master-ness”. Problems ranged from the trivial (he didn’t have a beard) to the not so trivial (he lip-synced to Scissor Sisters).

So, the question is either (depending on your point of view):

Alternatively, what is “Doctor-ness” and what is “Master-ness” – that is, what characteristics does someone have to have to be recognisably the Doctor or The Master (assuming they have the same memories as well)?

And just for luck, I throw in the Valeyard to really complicate things. Answers on a postcard or below.

Here’s odd. Highlander: The Source, sequel to Highlander: End Game, is going to be on tele on the US SciFi Channel in a fortnight. It’s not even gone straight to DVD – it’s now a ‘Sci Fi Channel original movie’. There’s an official trailer (below) and I have to say, it doesn’t look fantastic, which might explain the shift.

Apparently, they’re all off (Duncan and Methos, that is – at least some of the semi-original characters are in there) to find out what makes immortals immortal, even though it’s explained in Highlander 2, which apparently we’re supposed to ignore completely these days – they even did a re-edit of the movie to get rid of every reference to the Planet Zeist.

The grunge-o-matic atmosphere is probably something to do with their killing Connor before the events of Highlander: The Quickening took place, meaning we’re all going into post-apocalyptic, Ozone layer-free, East European hell since he wasn’t around to fix things. Even though he was. But we’re ignoring that now.

I’ll reserve judgement until it airs, though.

Here are a couple of promos for the season-opener of CSI. Interesting use of Kate Bush and quite gripping, too. Will Sara survive? Ooh…