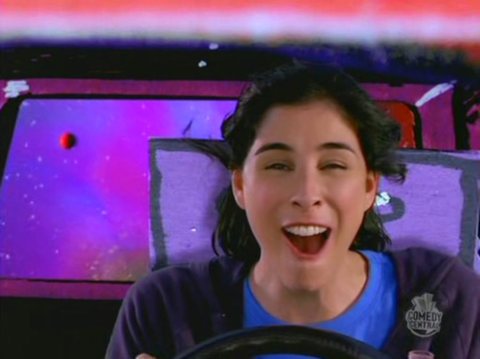 In the US: Just about every day of the week. It’s on Comedy Central anyway.

In the UK: Not yet acquired. Maybe E4 or More4. Who knows though?

Apparently, there aren’t enough shows about grown women with the minds of 8-year-old boys. Who knew?

Okay, let’s be a little fairer than that. Sarah Silverman is a very funny stand-up. She’s very imaginative, as is her new Comedy Central program, wisely called The Sarah Silverman Program. I was looking forward to it a lot.

But you know what? It all falls a bit flat. Mainly because I’m not eight years old.

Step into the incredible world of Sarah Silverman as she goes about her life, which on any given day, can include taking in a homeless man, exploring her sexuality or encouraging a young girl to enter a pageant in order to fulfill her own childhood dreams.

Sarah plays a character named Sarah Silverman whose absurd daily life is told through an array of scripted scenes and song. In each episode, Sarah manages to fall into unique, sometimes unsettling and always hilarious predicaments, with her sister (played by real-life sister Laura Silverman), her geeky gay neighbors, Brian and Steve (Brian Posehn and Steve Agee) and Officer Jay (Jay Johnston) never far from her side.

It has its problems. It’s all a bit scattergun and nothing seems to hit its mark. The show seems to be satirising tedious sitcoms and their tendency towards moralisation. But since sitcoms stopped doing morals in the early to mid 90s, it’s almost like satire of sitcoms from the 80s or the idea of a sitcom rather than of sitcoms themselves: it’s the scripted equivalent of a stand-up’s “have you ever noticed how men don’t like to shop?”

There’s not much by way of plot to the first episode, and what little there is a skeleton to hang various sketches around. Many of the sketches are very funny, particularly the ones where Silverman’s imagination is allowed to go into overdrive (such as the scene where Silverman trips out on cough mixture, the show-within-a-show Cookie Party, or Silverman’s frequent bursts of song and dance).

But around the funny sketches are a variety of deeply unfunny attempts to get laughs via toilet humour. If fart, pee pee and poo jokes are your thing, great. You’ll love these bits, too, although you’ll have heard better ones. Otherwise, you’ll be wondering where the Sarah Silverman who wrote the other sketches has gone to in this time of need.

Silverman’s trademark brand of humour – telling racist, sexist, homophobic, etc gags but pretending not to understand why they might be offensive – is usually pretty funny and clever: imagine Ricky Gervais but without the massively long pauses after every single line. Here, though, we’re down to things like a sitcom moral at the end: “Today, I’ve learned that old black women are wise beyond their years and young black women are all prostitutes” (confused look to camera). As written, it’s just not clever enough to pull off the joke.

But there are good bits. It has its moments. Who knows how much it might pick up by episode three? At the moment though, it’s got some way to go to become worth watching.

You can visit the official web site to find out more. And here’s a YouTube clip of that cough mixture scene I mentioned.