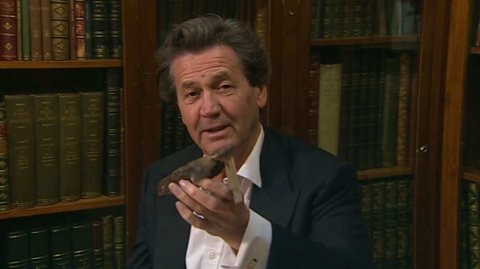 Everyone likes a good meme, right? It’s one of the joys of the “blogosphere”. Of course, blogs are Web 2.0 and tele is Web 0.0, so there’s no way really to interact with a meme that’s on television. Yet that’s what Melvyn Bragg has decided to do: create a meme.

What are the 12 most important books that changed the world as we know it?

Melvyn’s answer is somewhat odd. While there are the obvious, such as The Origin of Species, The Wealth of Nations and the Bible, we also have the rule book of association football, the patent for the Spinning Jenny and the Magna Carta. Clearly, these are an abuse of the meme rules, since most of them aren’t books. What also to make of the lack of Koran, Plato’s Republic or Thomas Paine’s Rights of Man?

But instead, it’s everything that’s wrong with ITV.

See? Now we’re meme-haggling. But he can’t hear me so what’s the point in that?

It’s a question that might be asked of the show itself. What is the point of a four-part, Sunday teatime series that picks 12 books at random and has Melvyn Bragg natter on about them? Is it, as AA Gill suggested about Simon Schama’s Power of Art, that “The point of these authored, visually clotted documentaries is really to be infomercials for instant coffee table tomes”? Possibly, since Melvyn does have a hardback out in July.

It’s certainly arguable that the show is intended to be just enough to keep Melvyn Bragg on at ITV1, lest he drown The South Bank Show, leaving the network with so minimal public service broadcasting that it gets its licence revoked. The money allocated by ITV1 for the show seems small enough to suggest it was rustled up during a whip-round down the pub at lunchtime, with glaringly harsh video used for everything, right down to the bad historical re-enactments. I never knew they had BetaSX back in the 19th century.

Where money has been spent, it’s purely been to allow Melvyn to stand in front of a wall in Paris – I suspect a producer’s credit in there somewhere for Mr Bragg, or that would have been the first thing to get chopped out at the planning stage.

Unlike Schama’s Power of Art, which had both budget and authority, you’ll be in no doubt that these are half-hearted or perhaps even desperate attempts to steer away from the stock footage used in the rest of the show and to try to be appealing on a sub-Five commissioning fee.

In its favour, there are guest appearances by the likes of Germaine Greer, Richard Dawkins and other people who are generally alien to ITV1 in that they know what they’re talking about when discussing a remotely intelligent subject. So this could certainly have made a great talking heads show, given half a chance.

But instead, it’s everything that’s wrong with ITV. It has ambitions to be something like the BBC’s fantastic documentary output, but without the originality, creativity or guts to achieve it; it needs to be flashy and appealing to attract people’s attention, but doesn’t have the budget to do that either.

In short, while there’s a good BBC show struggling to get out, it’s been undermined by being on ITV, which just needs a beard to cover for the fact it secretly would ditch arts coverage all together if it could.