In the US: CBS, Tuesdays, 10pm ET/PT. Also available on Innertube.
In the UK: Airing on BBC1 towards the end of 2007, with possible pick ups on UK Gold

When a project’s been sitting around for two years and has already had the main character recast after a failed pilot, you suspect things are wrong with it. But when it’s rushed forward to replace a failed drama – in this case, Smith – there comes the suggestion that maybe it’s not going to be too bad.

3 Lbs is a combination of various other hospital dramas, in particular House and MDs, but it does have a few sprinklings of originality. Starring Murder One’s Stanley Tucci, Good Morning Miami‘s Mark Feuerstein and Torchwood‘s Indira Varma, it focuses on that much neglected organ: the brain.

Plot (copied, typos and all, via the mystic power of typing from the CBS web site since they use Flash for everything)
Not your average medical drama, 3 Lbs., which refers to the weight of an adult human brain, is a show where hard science collides with the intricacies of personality, logic, emotion and faith as modern day heroes on the cutting edge of their profession explore the last mysterious frontier of medicine: the human brain.

The group is led by Dr. Doug Hanson (Stanley Tucci), a brilliant, sharp-witted neurosurgeon who compares the workings of the brain to wires in a box. On the other hand, his thoughtful, highly skilled protégé, Dr Jonathan Seger (Mark Feuerstein), honors the mysteries of the mind, and feels that in order to operate on someone’s brain he needs to know a little bit about the person first. Also part of this gifted medical team is Dr. Adrianne Holland (Indira Varma), a coy calculating neurologist, and Dr Tom Flores (Armanda Riesco), an intern who is sympathetic to their patients’ needs.

While Dr Hanson prefers to focus on the intricacies of peoples’ craniums instead of the people themselves, Dr Seger uses his charm and intuition to balance the emotional and psychological needs of his patients. However, this doesn’t get in the way of their shared obsessions about the brain, and their growing, sometimes secret mutual respect for each other’s talents and approaches. 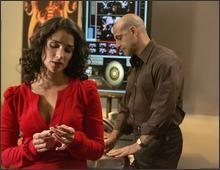 Okay, the marketing evil above doesn’t make it sound very good, but it’s not half bad. Certainly, it has plenty of House parallels, with Tucci as an arrogant but brilliant brain surgeon who has no bedside manner whatsoever (but has a great taste in suits). It’s a wonderful performance, with Tucci demonstrating just how good he is at playing refined sleaze-balls. Makes you wonder how Dylan McDermott would have played the role, as originally planned.

However, the show is far more of a double-act than House, with Feuerstein proving a good foil for Tucci. His character’s touchy-feelyness is almost psychotic in its all-embracing warmth – he’s the kind of guy who meditates before operations by putting his hand on his heart and breathing for 30 seconds. But Feuerstein still manages to make it work and you don’t feel the need to punch him for any more than, say, 25% of his on-screen time.

There’s less of a mystery element to the show than to House as well. What’s the matter with the patient this episode? It’s a brain tumour and it’ll need operating upon – I can pretty much guarantee you that. But what it’s doing, how it’s doing it, whether the patient will recover, etc: those are the variables. It’s also less cynical than House, making it the nicer alternative for those put off by an evil man with cane who believes everyone lies.

Since the show needs to have a gimmick to be interesting, the producers have picked on personality changes and dream sequences. The show is, in effect, a demonstration of just how much weird stuff can happen to someone who has something wrong with their brain, with some particularly effective and disconcerting dream sequences to prove it in the first episode. I won’t spoil it for future viewers, but suffice it to say, one of the team has something wrong with their brain and is likely to need it fixing at some point soon.

The acting’s all very fine, although Indira Varma’s character is so deliberately quirky (“I think all neurologists should work barefoot”) it’s hard to tell whether her performance is intended to suggest insanity or Englishness. Direction’s good, too, and it looks lovely, thanks to being filmed on location in New York.

However, the plotting left a little to be desired, with the last 15 minutes dragging in particular. It’s a little too heart warming for comfort. And just for once, I’d like to see a show about not very good doctors, rather than the best of the best. Where are the slackers when you need them?

Still, promising, and I hope to have a good report for the show by the time of the third-episode verdict.

Here’s a nice YouTube video from CBS that demonstrates what the show’s like, features an interview with Stanley Tucci, and includes some of the best clips from the show.

Who’s the next companion?

Yes, I know we’ve done this already. Twice, in fact. But as mentioned… well, everywhere now, neither the new companion to be nor Billie Piper will be appearing in the Doctor Who Christmas Special. But […]