Only one this week, thanks to the Bank Holiday weekend cramping my style:

Otherwise, that was it. Sorry about that. To make up for it, though, I’ll be reviewing both Five Bedrooms (Australia: Ten) and Blood and Treasure (US: CBS) after the jump.

Tomorrow’s Orange Thursday will look at John Wick: Chapter 3 – Parabellum (2019) and The Favourite (2018). Good Omens is available on Amazon from Friday, so we’ll definitely be catching that for Boxset Monday. DC Universe’s Swamp Thing is also starting on Friday, so that’ll probably be Tuesday’s review (although maybe swap the order on those two). And on Sunday, American Princess starts on Lifetime (US), so I might give that a crack as well at some point.

I’ve still not watched Catch-22, but I will. At some point. What/If, though, which was cloaked in mystery before its launch but is now available for all to see on Netflix, sounds like it’s terrible, so I still might not catch so much as a frame of it. Still.

As usual, I’ll be talking about the latest episodes of Harrow, Mr Black, The Twilight Zone, Warrior and What We Do In the Shadows. Inconveniently, The Hot Zone has been airing two episodes a night this week, but I’ve managed to catch both of last night’s and I’ll be reviewing them, too. And we’ll also be having a chat about the season final of Doom Patrol.

TMINE recommends has all the TV shows TMINE has ever recommended and TV Reviews A-Z lists every TV show ever reviewed.

If there seems to be one thing uniting disparate citizens in countries around the world, it’s the near impossibility of buying property in a city, if you’ve not already got your foot on the property ladder – particularly if you’re single. Five Bedrooms is Australia’s take on the situation, seeing five denizens at the singles table at a wedding have the sudden brainwave to club together to buy a house between them.

Naturally, all have stories to tell and reasons for wanting to own a house, be it because they’re gay and Asian and can’t come out to their mum, they’ve got a crush on a work colleague and this seems a good way to get closer to him, or they’ve decided to leave their husband. Naturally, it’s all a voyage of self-discovery, with each episode narrated by and focusing on a different member of the household.

That’s largely the plot, but there’s the standard housing-centric issues of leaks, bad surveys et al that also make it a cautionary tale. However, whether you’ll want to watch it will primarily come down to whether you like the characters, and I didn’t especially. YMMV, but probably not.

Blood and Treasure (US: CBS)

The first true sign summer is upon us is when CBS unveils its traditional “dumb but fun” show. This year’s is Blood and Treasure, a sort of National Treasure meets Whiskey Cavalier, in which a former FBI agent turned lawyer employed by art-collecting billionaire John Laroquette teams up with his ex-girlfriend/sexy art thief to recover the lost tomb of Anthony. Or maybe it’s Cleopatra. Well, whichever one it was that went missing when the bad guys blew up the Pyramids, which is where they were being stashed, along with the bodies of some dead Nazis. There’s also a secret society with a snake as an emblem.

Sounds like nonsense and it is, but it’s also not especially engrossing nonsense. Most of the time, the dialogue is people (repeatedly) saying things like “But Anthony and Cleopatra lived thousands of years after the Pyramids were built!”, as though that’ll make it any less stupid, and the plot never has any time to build up momentum before there’s yet another flashback to our hero/heroine’s doomed relationship.

There’s the occasional supporting character who’s quite fun (eg BSG‘s James Callis) and it’s always great to see Oded Fehr (The Mummy) in something, even as a bad guy. But the underlying story is so daft, you might as well be watching a crossover between The X-Files and Simon Schama’s History of Art.

Another pleasing episodic storyline and the new female character is shaping up nicely as a good match for Harrow himself. Nice to have the helper character back in on the story this season, too. But the story arc is leaving me cold.

Plus never have a storyline in which someone is supposed to be dead when said someone is probably the (second) most famous actor in the piece – (spoiler) (spoiler alert) Grant Bowler – if you actually want the audience to believe he’s dead. Still, at least they didn’t try it on for too long.

The Hot Zone (US: National Geographic)

Another mix of the lurid and the frighteningly realistic. The flashbacks to the 70s are playing a surprisingly important part in the storyline and the arrival in the present of James D’Arcy as the head of the CDC has us temporarily being forced to believe in the third episode that the CDC of all people are the evil bad guys. Fortunately, the fourth episode makes D’Arcy’s convictions far more plausible and justifiable, and of course (spoiler alert) (spoiler alert) he’s right .

There’s still an annoying soapiness to everything and the AIDS parallels are practically being welded onto the main storyline, but it’s still proving to be compelling and scary viewing. It’s also neatly forcing a US audience to surreptitiously watch a show that’s about 50% set in Africa with a black cast, speaking African languages. Still, I suppose it is National Geographic.

An episode focused on the daughter, who actually has a job! And she’s a journo! And they know what a sub-editor does! Amazing. This show grows on me more and more.

A few good fights and the Chinese negotiations and cultural points were interesting, but nothing special to talk about here.

So a bit of anti-climax this ending. After building up such a great villain with the power of narration and leaving everything on a cliffhanger last week, this week’s episode basically raises the white flag and admits it couldn’t come up with a satisfactory conclusion to everything. It therefore avoided everything important with a time jump, gave us a McGuffin for next season to distract us and rewrote Mr Nobody’s powers to be something radically different.

All of which is a great shame.

Not dreadful, certainly not Heroes season 1 finale dreadful, but fundamentally a bit of letdown.

That said, as a season, often filled by genius, some true moments of bizarreness and some almost Thick of It-grade swearing. Just not as good as it had led me to believe.

Probably the most surprising episode so far, in that it’s a clearly liberal show that despite the initial build-up, actually had a positive message about guns. Chris O’Dowd didn’t try to do anything funny, too. Not even once. Properly surprising this one and nicely dark, too.

In the US: Fridays, DC Universe In the UK: Acquired by Netflix. Will air in 2018 Genre mash-ups can work. And sometimes they don’t. Titans is an interesting example not just of sub-genre mash-ups but of […]

Every weekday, TMINE brings you the latest TV news from around the world Internet TV Teaser for Netflix’s 1983 Trailer for Netflix’s Chilling Adventures of Sabrina Netflix developing: adaptation of CS Lewis’ Chronicles of Narnia  […]

In the US: Fridays, DC Universe In the UK: Not yet acquired At the start of the 90s, DC’s Vertigo imprint of adult-oriented comics was a powerhouse of creativity – one largely powered by Brits. […] 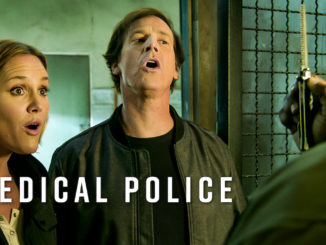