As a rule, despite this being an ‘international TV blog’, I don’t watch a lot of Indian TV. I did back in the late 80s/early 90s, when BBC Two had the likes of The Mahabharat. But Bollywood’s love of music and dancing is an anathema to TMINE (motto: “Tough on musicals, tough on the causes of musicals”) and the ubiquity of multi-channel TV by the mid-90s meant pretty much everything outside ‘the mainstream’ ended up shunted to its own channel with a random EPG number somewhere between the 75th and 76th Mersenne primes.

In other words, I – and almost everyone without a dedicated interest – haven’t had much of a chance to watch Indian TV in the UK since.

(Well, I can hear it coming from my downstairs neighbours a lot of the time – including right now – but I’m not sure that counts.)

The arrival of streaming TV hasn’t changed things that much, but changes have been happening, with Amazon and Netflix both acquiring a multitude of Indian shows in the past couple of years. However, the opacity of channel categories and ‘recommendations’ means that you usually have to know what you’re looking for and express an interest before either network will reveal its hidden cache of treasures.

But we’re now entering the phase when both global networks are commissioning and airing Indian shows for global consumption – and they want you to watch them so might even tell you they have them.

As you might expect of Netflix, Sacred Games is something of a prestige production, being based on the award-winning Vikram Chandra novel of the same name. It sees Saif Ali Khan playing one of the few honest cops in Mumbai, something that earns him nothing but misery in exchange. One night, he gets a mysterious phone call from someone giving him all manner of orders and the runaround. Who are they? What do they want? And what game are they playing? Whatever it is, it seems Mumbai might have just a few days of existence left…

Sacred Games is deceptive. When I started watching it last week, I suggested that it was like “an odd religious combination of The Game, GoodFellas and Narcos.” And sure, that’s how it starts, with Khan getting the runaround at the hands of narcissistic, ‘multi-fathered’ criminal Nawazuddin Siddiqui, who proceeds to narrate the entire history of India since the 1970s to both Khan and the viewer, with a little help from flashback news footage.

However, after that, the The Game element deserts the show completely, which given the title is somewhat surprising. Instead, it becomes Khan’s quest to solve old crimes and find out how Siddiqui knew his father, all while dealing with his corrupt boss (Neeraj Kabi), various corrupt politicians and Indian intelligence agencies such as RAW, represented by Radhika Apte (who’ll also be starring in Ghoul soon).

Oddly, Khan’s investigations are a side-plot – despite the fact (spoiler alert) (spoiler alert)  Siddiqui kills himself at the end of episode one , he continues to provide the bulk of the action through his narrated flashbacks, with Khan playing a slightly lesser role. I’m not quite sure how that works, but Siddiqui does claim to be God…

Here, you can at least get a hint of why the show is called Sacred Games, since Khan’s Sikh character is the calm centre in the middle of the fighting, while Hindus and Muslims are at each other’s throats everywhere else. The show does expect you to be able to spot who’s who, too, whether it’s through characters’ manner of dress, language spoken or dietary customs. Not sure who Ganesha or who Rama are? Don’t know the difference between Diwali and Eid? Can’t remember whether it’s Hindus or Muslims who can’t eat beef (or is it both)? You might need to have Wikipedia open next to you to be able to keep up with the allusions, both explicit and implicit. That even goes for the episode titles (“Ashwathama“, “Halahala“, etc).

All of which makes Sacred Games a bit more like Babylon Berlin, with its doomsday plot and its warring, ideologically driven gangs in a city racked by poverty and corruption, yet privy to vast wealth. Just as Babylon Berlin was a German ‘Krimi’, so Sacred Games is a cops-and-Bhais detective thriller.

There’s also lots of swearing. At first, I thought this was down to the American subtitling – which was so American at times, it even had one character brandishing a cricket bat and proclaiming he was going to “score a home run.” FFS. But since the dialogue often lapses into either a melange of English and Hindi or just pure English, it soon became clear that actually, they really are a very sweary bunch of people indeed. 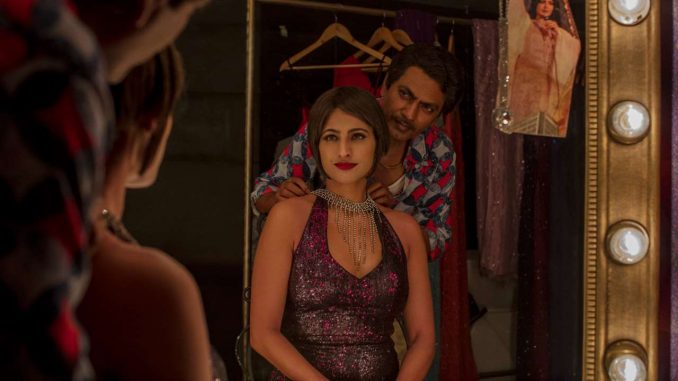 Unfortunately, the show’s overall plot is not very good. Well, it might be, but this first season is just the first quarter of what seems to be a Mahabharat-length novel and the good stuff is probably being saved up for seasons 2-4. For most of the run of eight episodes, you have no idea why you’re watching it. At first, because of the on-screen countdown, you hope it’s because you’ll find out why Mumbai only has 20 or so days left. But you barely even get a hint of an answer until the very last episode.

Instead, it’s mostly about Khan wondering whether he needs to beat suspects and lie to be a good cop in the face of so much depravity, while polishing his old motorbike; meanwhile, Siddiqui is doing his best Ray Liotta in retro-90s garb and slandering ex-PMs. There’s a surge of excitement towards the end of episodes six and seven, with hints of some greater plan, but they’re mostly misleading, as it’s then back to the usual beautifully shot, violent highlights of Mumbai.

Unlike Babylon Berlin, Sacred Games is fairly typical of old school crime thrillers in that it doesn’t have much to offer its female characters. There are cranky mothers, there are wives and girlfriends, and there are prostitutes. Any woman who appears to be something else ends up turning out to be a secret prostitute – surprise! Secret agent Apte provides a glimpse of something different, but ultimately (spoiler alert) (spoiler alert) ends up dead . It’s a shame, as this could have been modern India’s calling card to the televisual world.

At the end of the final episode, while there were at least enough hints that the action was set to hot up in the next season and that we might even learn why Siddiqui had done any of the things he’d done in the first episode, I was left wondering what the point of the season was.

It certainly wasn’t without merits: the cast is great, the direction is impressive, the plot is occasionally transgressive and at least touches on deeper issues, while there are certainly surprises to be had. But Sacred Games sets up questions it never really even tries to answers and expects us to be interested in Siddiqui without explaining why. We can root for Khan a bit, but it’s like rooting for an underpowered bumper car that collides from situation to situation without any real animus of its own.

I wasn’t even sure I knew what it had even been about, beyond giving the viewer a look back at the past 30 years of Mumbai’s political, cultural and criminal history, without any of the brilliance or relevance of Narcos or Babylon Berlin.

I can see myself watching later seasons in the hope that the rest of this novel is worth it. But that’s because I’ve now invested eight episodes of my time. If I were you, I wouldn’t start it – at least until I’ve watched the next few seasons for you.