The words ‘Deep State’ and ‘Fox’ in near proximity should normally trouble you. For the uninitiated, the idea of the ‘deep state’ is that secretly, behind the scenes there’s a new world order of sorts, trying to ensure that specific policies happen. So far, so illuminati. However, in the US, Fox News, Donald Trump et al have used the phrase ‘deep state’ to suggest that anyone potentially working against President Trump – for example, to impeach him for various criminal offences he might have committed – is really a member of the deep state trying to frame him, is a traitor and should probably be executed. This includes members of the FBI and other government organisations who might be doing what others would call ‘obeying the rule of law’.

Want to know if someone’s a crackpot? If they use the phrase ‘deep state’ to talk about Robert Mueller, they’re a crackpot.

Fortunately, we’re in the UK, Fox UK isn’t Fox News and Fox Networks’ first European/African commission Deep State isn’t suggesting that Alex Younger is a pawn of Goldman Sachs. Sure, there are hints that the Iraq war was started by big business for its own needs and engineered David Kelly’s suicide, but that’s not really deep state or the government of the day, and at least it’s all fictionalised. Robert Mueller’s real. So’s Donald Trump.

Deep State sees Mark Strong (Low Winter Sun) playing a former MI6 officer who’s retired to France and is now living happily with his new French wife Lyne Renee and lovely moppets. Then he gets a spooky calling card from his spooky former boss (Alistair Petrie), demanding he return to London. There he’s told that son Joe Dempsie (The Fades, Skins, Game of Thrones) is dead, having decided to follow in his dad’s spying footsteps. Worse still, he’s been killed by Strong’s protégé Zubin Varla (Strike Back).

Strong’s mission, which he decides to accept: head off to Beirut to kill Varla and the rest of his team, as they’ve clearly gone rogue. But is everything as it appears to be? And whom can Strong trust?

Just like dopey old The State Within, Deep State has lofty ambitions to be a smart spy show, does its best, but ends up getting drowned in a sea of spy clichés. Filmed in both Morocco and London and with a supporting cast that also includes Anastasia Griffith (Trauma, Damages, The Cazalets) and Amelia Bullmore (Big Train, Scott & Bailey), Deep State has obviously had a lot of cash spent on it. True, although Morocco works fine as Iran or Beirut, it’s less fine as France, but it’s not Scunthorpe at least and they also hired a few French speakers. The fact there are references to ‘The Section’ clearly suggests that writer Matthew Parkhill is a fan of Callan, and thus an appreciator of the classics.

But it’s spy dramas, rather than spy fact that are the reference points here and if you’ve watched some decent spy shows, almost nothing about Deep State will surprise you – other than when it goes for something blindingly stupid that seems beneath it.

You can forgive stupid names for covert sections, such as ‘the Bank’. You could even forgive the ‘key to a safety deposit box containing top secret footage on a USB drive’. But if all it contains is a minute-long confession to camera, what’s the point of that, hey? What’s that going to prove?

Then you get supposed top-tier secret assassination units learning that a member of their team is in league with the baddies (thanks to a timely observation said member should have known about) and rather than heading off their own separate ways, falling back to plan B, etc, they decide to go back to the safe house their treacherous friend knows about to discuss all of this and then pick somewhere else to go to.

Worse still, every ‘twist’ is one you’ll see coming. Do the goodies all trust precisely the wrong people, every single time? Yep. Is everyone going to fall for every single trap laid for them? Yep. I’m hoping it’s all an elaborate bluff and later episodes will play on this, revealing how the audience have been fooled. But putting it all in the first episode? That’s either brave or stupid. Or more likely, it’s not a bluff. 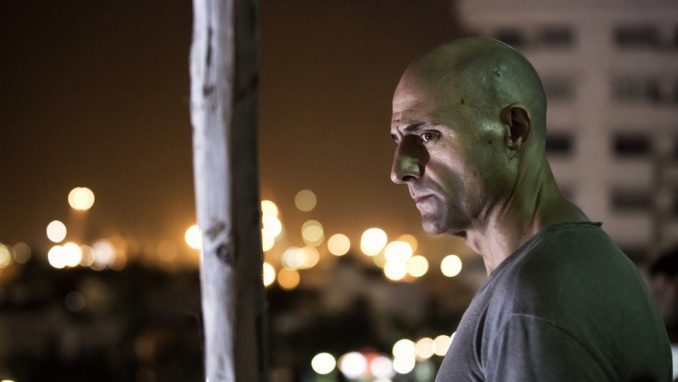 Strong does his best to be a stoic puncher of bad guys, jumping across rooftops and beating up guys half his age, in decently choreographed but unsurprising fight scenes. He also does well being a stoic punchbag for various wives of his, current and ex, as they berate him for being a spy.

“Tough job being a man, isn’t it, hey? But the world needs stoic, manly spies, prepared to sacrifice and not cry for their dead sons, even if women won’t understand that – until we save them,” the show might as well have stamped on Strong’s forehead. It’s not quite the worst spy characterisation since we evolved from slime molds, but it’s getting there.

But that’s virtually all the characterisation anyone gets, as the show is more geared up to deploying nonsense plotting to suggest that the ‘deep state’ is everywhere. Think you’re safe in France? Ha, ha! We can get your bank card blocked and your utilities switched off! Ha, ha again!

They could have emailed to arrange an appointment, you know?

Strong and his strong Strong performance, as well as the production values, are the show’s main draws at the moment, although I quite like the fact that Varla’s probably a good guy for a change. But I’m not feeling enthused at all and I might not even bother with a second episode. Nevertheless, it could have been worse and given it’s already been renewed for a second season, some people clearly liked it.

Don’t go in expecting a new Bourne or even an old Bond and you might enjoy it. If The Night Manager is more your speed, again, this could be a show for you. Just don’t expect The Sandbaggers.

What have you been watching? Including Fargo, Agents of SHIELD, Silicon Valley and Friends With Better Lives

What I watched in the week ending Thursday 16th April 2014